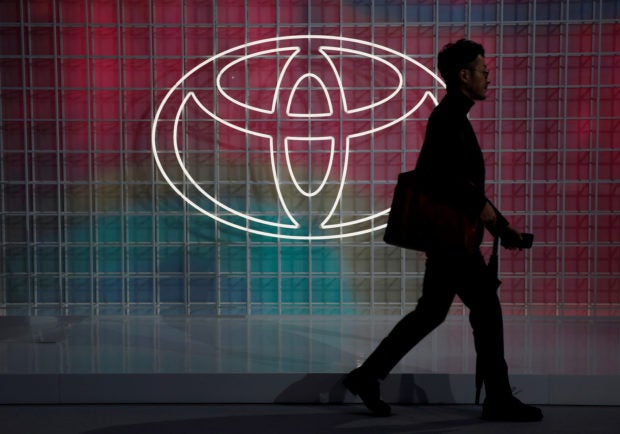 TOKYO–Toyota upgraded its annual net profit forecast on Thursday, predicting an earnings boost from the weaker yen even after first-quarter net profit took a hit from pandemic-related supply chain issues.

The global chip shortage, Covid-19 lockdowns disrupting Chinese factory output and Russia’s invasion of Ukraine are all weighing heavily on the auto industry.

But Japanese companies like Toyota selling products overseas have also benefited from a cheaper yen, which has hit 24-year lows against the dollar in recent months.

The world’s top-selling automaker now forecasts an annual net profit of 2.36 trillion yen ($17.6 billion) — up from its previous estimate of 2.26 trillion yen, but still a drop of 17 percent compared with last year’s record results.

“Despite the positive foreign exchange effects from the weaker yen, the large impact from lower sales volume due to supply constraints and higher raw materials prices led to a decrease in operating income” in the first quarter, the company said.

Meanwhile, “the revision of foreign exchange rate assumptions had a positive impact on the operating income forecast”, it said.

Revisions to the predicted impact of “soaring materials prices” and cost-reduction efforts would also cause operating income to decrease this financial year, Toyota added.

Buoyed in part by the weaker yen, Toyota in May logged a record full-year net profit of 2.85 trillion yen for 2021-22.

The focus will now be on whether the company can keep its global production target of 9.7 million units for this financial year in light of the parts shortage, said Satoru Takada, auto analyst at research and consulting firm TIW.

However, Toyota has so far largely escaped the worst of the crises, he said, adding that the company has “customers waiting for its cars thanks to strong demand”.

The  firm built stronger ties with domestic suppliers after Japan’s 2011 earthquake and tsunami, which analysts say helped it weather a pandemic-triggered shortage of semiconductors — an essential component of modern cars — better than its rivals.

But it has been forced to repeatedly adjust production targets because of the chip shortage and pandemic-linked factory closures.

Adding to the problems is uncertainty arising from Moscow’s war in Ukraine. Toyota said in March it would halt operations at its only factory in Russia, and stop shipping vehicles to the country.

Ahead of the earnings announcement, SC Capital called Toyota’s annual outlook “the most low-balled in the industry”, predicting a sharp upwards revision later this year as semiconductor supplies become more abundant.

“Toyota’s first quarter… is expected to be bad. But consensus is way too low for the rest of the year, as supply constraints from Shanghai will subside from the second quarter and chip inventory rises more than expected,” SC Capital said in a SmartKarma commentary.

“Anyone who’s spoken with the company knows that the second quarter will see a V-shaped recovery and an upward revision for the full fiscal year.”