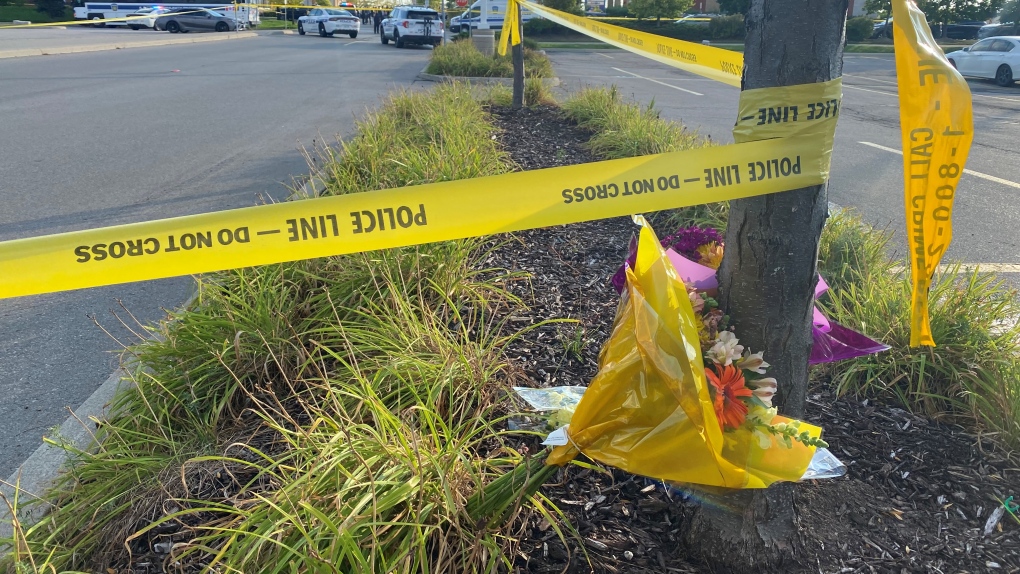 Condolences and messages of support started to trickle in on social media hours after two people, including a police officer, were killed and multiple others were injured in shootings across the Greater Toronto Area.

According to police, two people were first shot in Mississauga. One of the two victims was Toronto police Const. Andrew Hong, who was fatally shot while on a lunch break from a training exercise. The other individual was taken to a trauma centre.

Shortly after a shooting was reported in Milton. One person has been pronounced dead while two others were rushed to hospital.

The same suspect is believed to be responsible for both incidents. Hours later, Hamilton police said the suspect had been shot and killed.

The shootings all occurred within the span of four hours, leaving multiple communities reeling from the violence. Police hadn’t even cleared the crime scenes before flowers began to appear in memory of those who lost their lives.

Flowers are dropped off at the scene of a fatal shooting in Mississauga on Sept. 12, 2022. (John Musselman/CTV News Toronto)

Ontario Premier Doug Ford quickly took to social media to say he was “horrified” to hear of the shootings.

“Like all Ontarians, I’m horrified by today’s senseless violence, including the killing of a Toronto police officer,” Ford said in a tweet.

“I’m so grateful to law enforcement for bringing this situation to an end. May justice for those killed and injured be swift.”

Toronto Mayor John Tory extended his thoughts to Const. Hong’s family, friends and the entire Toronto Police Service, who he says is “grieving right now after the loss of one of their own.”

“I am heartbroken to know Toronto Police Constable Andrew Hong was killed this afternoon in Mississauga,” he said in a statement. “Today, we are sadly reminded of the danger our officers face on a daily basis as they work to keep us all safe. I want to thank all the officers – from multiple police services – who responded to this terrible tragedy.”

“In the days ahead, I know Toronto residents will join me in supporting the Hong family and our entire policing community as they come together to mourn.”

Mississauga Mayor Bonnie Crombie said she was in “utter shock” by the events.

“Like many residents across Mississauga, Toronto and Milton, I am in utter shock and devastated in light of today’s deadly gun attacks that claimed several lives and others in life-threatening condition,” Crombie said in a statement.

STATEMENT: Devastated in light of today’s attacks that claimed several lives and left others critically injured. I offer my condolences to the families & loved ones of those who lost their lives and pray for the quick recovery of those receiving treatment. https://t.co/vlOspaQgx7 pic.twitter.com/uQmRtzz2Ax

“In the wake of this tragedy, I want to offer my deepest condolences to the families and loved ones who lost their lives in this unimaginable tragedy.”

‘KILLED IN THE LINE OF DUTY’

Messages of condolences began to pour in by police forces across Ontario for the officer who was slain on Monday.

On behalf of OPP uniform and civilian members, I’d like to offer our deepest condolences to the family, friends and colleagues of the fallen officer from the @TorontoPolice Service tonight. We grieve with you at this profoundly difficult and tragic time. #HeroesInLife pic.twitter.com/EhBpchtAFH

On behalf of Chief Burbidge and all members of RHFES, we extend our thoughts, support and condolences to the family and friends of the officer fatally injured today, as well as the entire @TorontoPolice family during this difficult time.

We’ve learned that a Toronto Police officer has been shot and killed during an interaction in Mississauga. Our hearts extend to the officers family and @TorontoPolice colleagues.

The Ontario Special Constable Association said it “extends sincerest condolences to the lived ones of the TPS officer who was killed today, as well as to his TPS and TPA family.”

“Our hearts are with Halton police, Peel police and Hamilton police as well on this tragic day, and we wish speedy recoveries to those injured.”

The president of the Toronto Police Association released a statement late Monday evening in memory of Hong, saying he had been with the service for 22 years, 19 of which he spend at Traffic services.

“Losing a member in the line of duty has rippling effects across our membership and the broader policing community and our city,” the statement read.

“Today we have a stark reminder of how this work can result in the ultimate sacrifice. We all owe Andrew our respect and our gratitude”