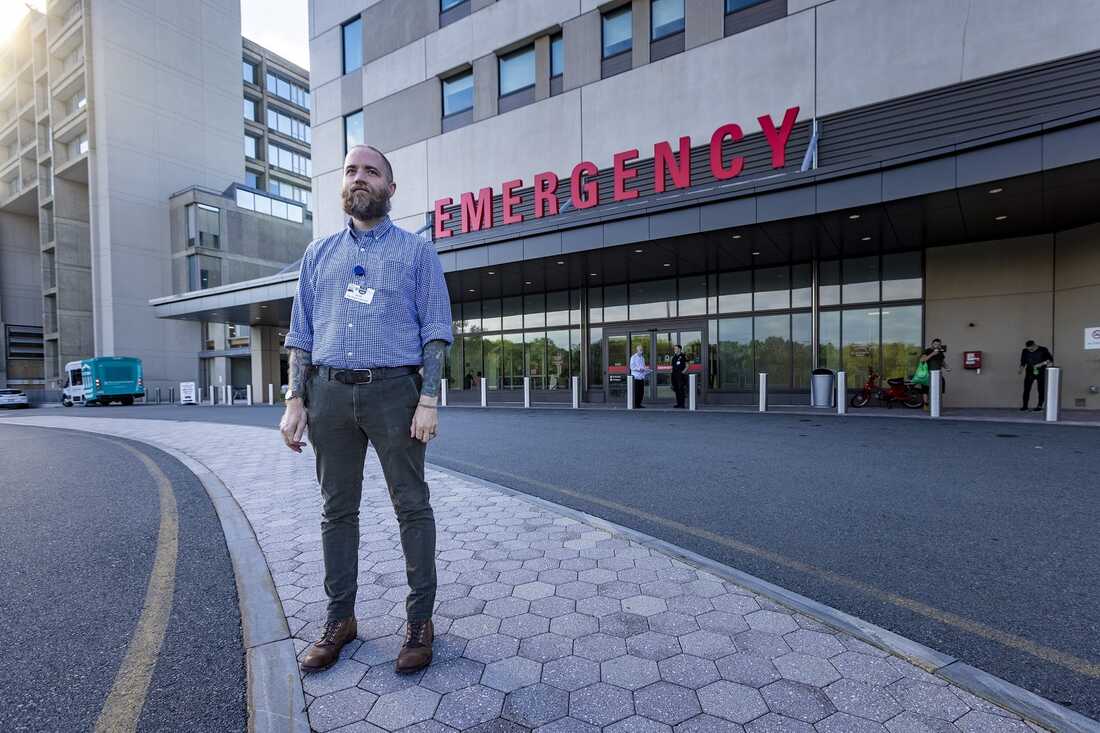 David Cave, a recovery coach who is part of an addiction specialty team at Salem Hospital, north of Boston, stands outside the emergency department.

David Cave, a recovery coach who is part of an addiction specialty team at Salem Hospital, north of Boston, stands outside the emergency department.

Marie lives in the coastal town of Swampscott, in Massachusetts. Last December, she began having more and more trouble breathing. One morning, three days after Christmas, she woke up gasping for air. A voice in her head said, “You’re going to die.” Marie dialed 911.

“I was so scared,” Marie said later. Describing that day, the 63-year-old’s voice filled with tension, and her hand clutched at her chest.

Marie was admitted to Salem Hospital, north of Boston. The staff treated her COPD, a chronic lung condition that includes emphysema and chronic bronchitis.

After her worst symptoms subsided, a doctor came the next day to check on her. He told Marie her oxygen levels looked good and that she was stable and ready to be discharged.

NPR is not using Marie’s last name because she, like 1 in 9 hospitalized patients, has a history of addiction to drugs or alcohol. Disclosing a diagnosis like that can make it hard to find housing, a job and even medical care in hospitals where patients with an addiction may be shunned.

But talking to the doctor that morning, Marie felt she didn’t have a choice. She had to tell him about her other medical problem.

“He said I could be released,” Marie recalled. “And I said, ‘I got to tell you something. I’m a heroin addict. And I’m, like, starting to be in heavy withdrawal. I can’t literally move, please don’t make me go.'”

At many hospitals in Massachusetts and across the country, Marie would likely have been discharged anyway, while still in the pain of withdrawal. Perhaps she would leave with a list of local detox programs where she might — or might not — find help.

But a crucial opportunity to intervene and treat at the hospital would have been lost — partly because most hospitals don’t have specialists available who know how to treat addiction, and other clinicians don’t know what to do.

Hospitals typically employ all sorts of specialists who focus on critical organs like hearts, lungs and kidneys — or who treat systemic or chronic diseases of the immune system or the brain. There are specialists for children, for mental illness, for childbirth and hospice.

But if your illness is an addiction or a condition related to drug or alcohol use, there are few hospitals where patients can see a clinician — whether that be an M.D., nurse, therapist or social worker — who specializes in addiction medicine.

Their absence among hospital personnel is particularly striking at a time when overdose deaths in the U.S. have reached record highs, and research shows patients face an increased risk of fatal overdose in the days or weeks after they are discharged from a hospital.

“They’re left on their own to figure it out, which unfortunately usually means resuming [drug] use because that’s the only way to feel better,” says Liz Tadie, a nurse practitioner certified in addiction care.

In the fall of 2020, Tadie launched a new approach at Salem Hospital, using $320,000 from a federal grant that the hospital had worked for several years to secure. Tadie put together what’s known as an “addiction consult service.”

At Salem, that team included Tadie, a patient case manager, and three recovery coaches — who draw on their experience with addiction to advocate for patients and help them navigate their treatment options.

What an addiction consult service brings to the bedside

So on that day, when Marie said, “Please don’t make me go,” her doctor didn’t tell Marie she had to leave. He called Tadie for a bedside consult.

Tadie started out the treatment by first prescribing methadone, a medication to treat opioid addiction. Although many patients do well on that drug, it didn’t help Marie, so Tadie switched her to buprenorphine, with better results. After a few more days, Marie was eventually discharged and continued taking buprenorphine to manage her addiction to opioids.

But Marie continued seeing Tadie for treatment as an outpatient and was able to turn to her for support and reassurance:

Among Salem’s clinical staff, Tadie helped spread the word about the expertise she can offer and how it can help patients. Success stories like Marie’s helped her make the case for addiction medicine — which also meant unraveling decades of misinformation, discrimination and ignorance about patients with an addiction and their treatment options.

Part of the problem, according to Tadie, is that doctors, nurses and other clinicians get very little training in the physiology of addiction and withdrawal, the medications and treatment options, and the emerging science about what works for these patients. What little training that doctors and nurses do get is often unhelpful.

“A lot of the facts are outdated,” Tadie says. “And people are training to use stigmatizing language — words like ‘addict’ and substance ‘abuse.'”

Tadie gently corrected doctors at Salem Hospital, for example, who thought they weren’t ever allowed to start patients on methadone in the hospital.

“Sometimes I would recommend a dose and somebody would give pushback,” Tadie says. But “we got to know the hospital doctors and they, over time, were like, “OK, we can trust you. We’ll follow your recommendations.”

Other members of Tadie’s team have also wrestled with finding their place in the hospital hierarchy. David Cave, one of the recovery coaches at Salem Hospital, is often the first person to speak to a patient who comes to the emergency room in withdrawal. He tries to help doctors and nurses understand what the person is going through and help navigate their care.

“I’m probably punching above my weight every time I try to talk to a clinician or doctor,” says Cave. “They don’t see letters after my name. It can be kind of tough.”

But naming addiction as a specialty, and hiring people with training in this particular disease, is shifting the culture of Salem Hospital, according to Jean Monahan-Doherty, a social worker who has referred patients to Tadie.

“There was finally some recognition across the entire institution that this was a complex medical disease that needed the attention of a specialist,” Monahan-Doherty says. “People are dying. This is a terminal illness unless it’s treated.”

Former director of substance use disorder services at Salem Hospital Liz Tadie (left) and social worker Jean Monahan-Doherty. Tadie is moving to a new job at another hospital, but Salem Hospital leaders say they are committed to continuing the program.

Former director of substance use disorder services at Salem Hospital Liz Tadie (left) and social worker Jean Monahan-Doherty. Tadie is moving to a new job at another hospital, but Salem Hospital leaders say they are committed to continuing the program.

This approach to treating addiction is winning over some Salem Hospital employees — but not all.

“Some of the medical staff continue to see it as a moral issue,” Monahan-Doherty says. “Sometimes you hear an attitude of ‘Why are you putting all this effort into this patient? They’re not going to get better.’ Well, how do we know? If a patient comes in with diabetes, we don’t say, ‘OK, they’ve been taught once and it didn’t work. So we’re not going to offer them support again.'”

Despite lingering reservations among some colleagues, the demand for their services is quite high. Many days, Tadie and her team have been overwhelmed with referrals.

Four other Massachusetts hospitals also added addiction specialists in the past three years and experienced similar challenges and success. The additional staff were paid for by federal funding from the HEALing Communities study. This project is paying for a wide range of strategies across several states, to determine the most effective ways to reduce drug overdose deaths. They include mobile treatment clinics, street outreach teams, naloxone trainings and distribution, rides to treatment sites, and multilingual public awareness campaigns.

“You really do provide better care for patients and you make the care environment one that people are more satisfied working in,” says Dr. Jeffrey Samet, who leads the Massachusetts portion of this research effort. Samet practices primary care at Boston Medical Center and says adding addiction specialists in hospitals is a key piece of the solution.

Dr. Todd Kerensky, president of the Massachusetts Society of Addiction Medicine, has seen patients cry when they learn he specializes in addiction and wants to treat their disease, not shame them.

“It’s gut-wrenching to know there are a lot of institutions that don’t have this service,” says Kerensky. It’s not clear how many hospitals in Massachusetts have addiction experts on staff, but Kerensky says it’s a “distinct minority.”

There are many possible reasons. It’s a new field, so finding qualified staff members with the right certifications may be a hurdle. Some hospital leaders say they’re worried about the costs of addiction treatment and fear they’ll lose money on the efforts. Some doctors report not wanting to initiate a treatment medication while the patient is still in the hospital, because they don’t know where to refer patients after they’ve been discharged, whether that be outpatient follow-up care or a residential program. To address follow-up care, Salem Hospital started what’s known as a “bridge clinic,” where patients get help transitioning to outpatient care.

“People with substance use disorder are coming to our hospitals now,” said Englander, who directs an addiction care team at Oregon Health and Science University. “We can’t wait. We have to do better, and this is the time.”

Englander says the federal government could support the creation of more addiction consult services by offering financial incentives — or penalties for hospitals that don’t embrace them. The Centers for Medicare & Medicaid Services, which has regulatory authority over most U.S. hospitals, could require that hospitals stock the medications used to treat an addiction and track outcomes for patients hospitalized with a substance use disorder, in the same way that CMS already does when it comes to readmissions for other health conditions.

At Salem Hospital, the program is still new, and some staff worry about its future. Liz Tadie is moving to a new job at another hospital, and the federal grant ended June 30. But Salem Hospital leaders say they are committed to continuing the program, and the service will continue.

Compared to the other four Massachusetts hospitals that launched addiction consult teams using the same federal grant, Salem Hospital has helped the most patients. Over a 15-month period, its team helped 448 patients begin medication to treat their opioid use disorder.

5G on airplanes could mean the end of Airplane Mode