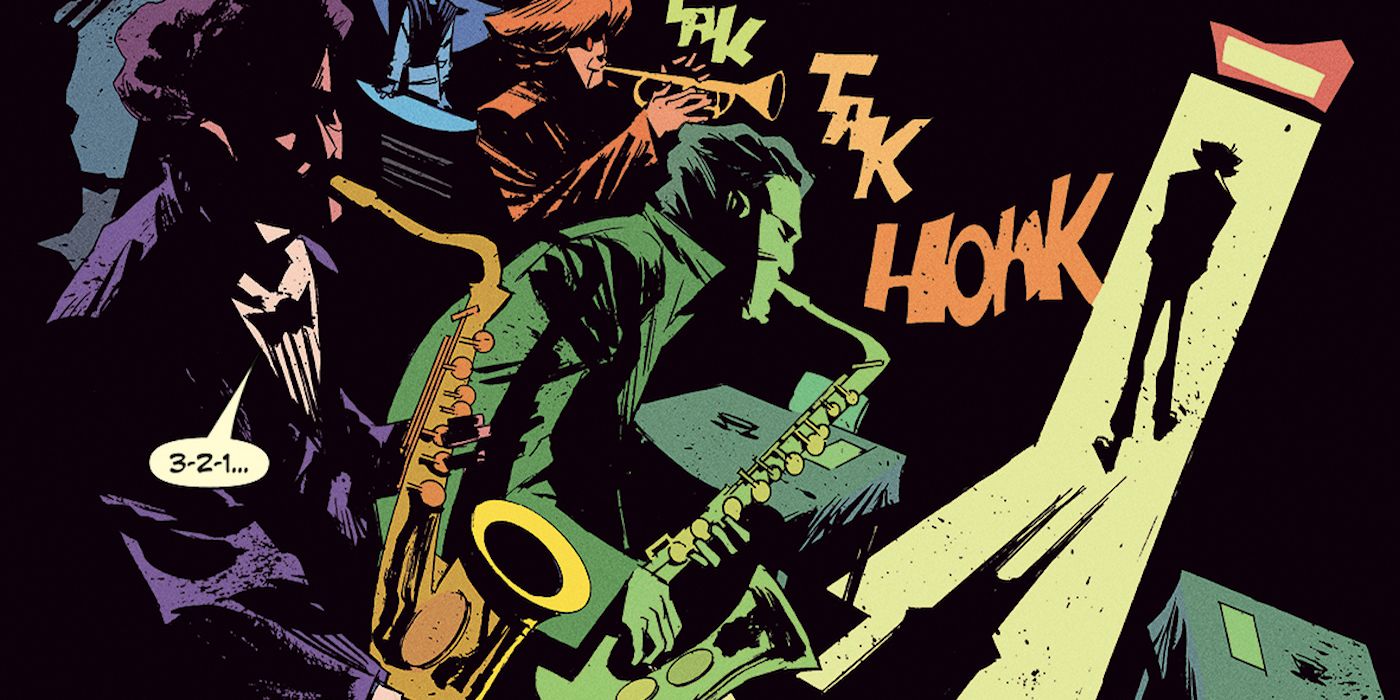 Titan Comics’ Cowboy Bebop #1 brings an excellent start to a new series that stays true enough to its source material while forging its own bold path.

Cowboy Bebop is one of the best and most beloved anime series due to its compelling hero, a space-noir setting, careful balance of comedy and dark drama, and existentialist philosophy. More recently, Cowboy Bebop has been brought back into mainstream culture thanks to Cowboy Bebop’s short live-action reboot. While the television adaptation didn’t last long, it spawned a continuity of its own with as much to offer as its anime predecessor. That continuity is explored in-depth through Titan Comics’ Cowboy Bebop #1.

In Cowboy Bebop #1, Spike, Jet, Faye, and Ein are on the trail of a mysterious thief, Melville. Clothed in the “probability vest” — which is said to increase luck to exponential levels — Melville has successfully pulled a heist, evaded the Bebop bounty hunters, and escaped. Now the bounty on his head has been raised, and everyone — from cops to hunters to Vicious’s Syndicate — wants a piece of the action. Low on fuel (and food), the Bebop crew are eager to find Melville before anyone else does. But luck may not be on their side.

Being a tie-in with the live-action series, Cowboy Bebop #1 has its own distinct story that feels separate but not too far removed from the original 90s anime classic. Overall, the comic stays faithful in tone to both series. It has all the hallmarks of what makes the franchise a hit: witty repartee, fast-paced fight and chase scenes, and moments of human tenderness. The space cowboys are in classic form here, with a deft interplay of sarcasm, poetic musings, and Spike’s constant hunger and love of food.

There is a strong balance of comedy, drama, and tension throughout Cowboy Bebop #1. Writer Dan Watters perfectly captures the spirit of the franchise. The manhunt plot is solid, and so is the discourse about the existence of luck. Decent comedy and softer moments between Jet and others are on full display here.

In all its forms, Cowboy Bebop is a sci-fi noir filled with aircrafts, mecha guns, and shadowy cities. Cowboy Bebop #1 stays true to this aesthetic, thanks to artist Lamar Mathurin having clearly studied the world. This comic is gorgeous, with huge, stark swaths of black placement on every page. Further pushing the noir-like appearance and vintage vibe is the grainy, dusty texture running through the pages — such as raw splotches and black streaks of rain. Colorist Roman Titov is instrumental in bringing this world to life. Staying true to the Cowboy Bebop style, eschewing the ever-popular and now cliché palette of dark, grimy, muted colors. Instead, Titov features brights, primaries, and secondaries in Cowboy Bebop #1, giving the comic an appealing levity and neon-like lightness that contrasts nicely with all its black shapes and dark tone.

There are a few weaknesses to Cowboy Bebop #1. More time could have been spent developing Melville. However, this choice could have detracted from his mystery, which will no doubt play out in the next few issues. Similarly, the plot could have slowed down to introduce the Bebop crew to new viewers. Otherwise, Cowboy Bebop #1 is an excellent start to a series that promises to have its own mysterious and action-packed stories to tell.

Reader and reviewer of Comics here on CBR. She’s a recent SCAD graduate with MFA in Sequential Arts, a BA in writing, and an unhealthy love for nostalgic pop culture of the 1970s, 80s and 90s. She watches too many horror movies and reads too many comics, and now she draws and writes about them for a living. She has a portfolio website hannahroseartist.com and can be contacted via her instagram @hannahroseartist and her email [email protected]

The Bedford Lodge’s splendid feasts promise a Jubilee to…

The Looney Tunes are coming to ‘Hot Wheels…

Varun Dhawan teases his OTT debut. Says, Something is in…