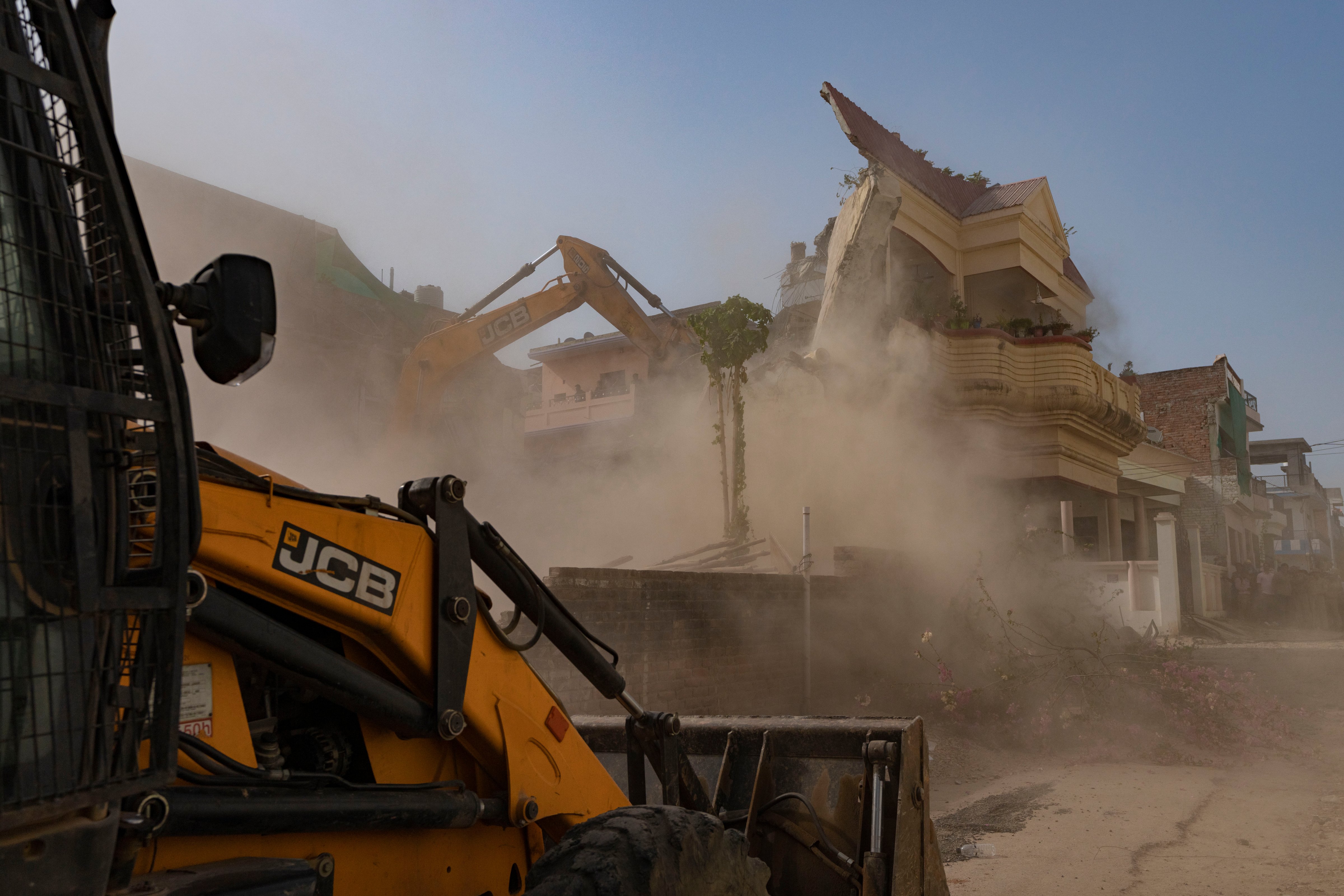 LUCKNOW, India — Protests have been erupting in many Indian cities to condemn the demolition of homes and businesses belonging to Muslims, in what critics call a growing pattern of “bulldozer justice” aimed at punishing activists from the minority group.

On Sunday, authorities in the northern state of Uttar Pradesh rode on a bulldozer to raze the home of Javed Ahmad, who they said was connected to Muslim religious protests that turned violent last Friday. Police arrested Ahmad on Saturday.

The protests were sparked by derogatory remarks about Islam and the Prophet Muhammed made recently by two spokespeople of Prime Minister Narendra Modi’s Hindu nationalist Bharatiya Janata Party. The party suspended one of them and expelled the other, issuing a rare statement saying it “strongly denounces insults of any religious personalities.”

Bulldozers also crushed the properties of protesters in two other cities in Uttar Pradesh last week. In April, authorities in New Delhi used bulldozers to destroy Muslim-owned shops days after communal violence in which dozens were arrested. Similar incidents have been reported in other states.

“The demolitions are a gross violation of constitutional norms and ethics,” said Nilanjan Mukhopadhyay, a specialist on Hindu nationalist politics and biographer of Modi.

Authorities demolish the residence of activist Javed Ahmad they say has been constructed illegally in Prayagraj, India, on June 12, 2022.

On Tuesday, 12 prominent people, including former Supreme Court and High Court judges and lawyers, sent a letter to India’s chief justice urging him to hold a hearing on the demolitions, calling them illegal and “a form of collective extrajudicial punishment.” They accused the Uttar Pradesh government of suppressing dissent by using violence against protesters.

Two people who were protesting the remarks by the governing party spokespeople died of gunshot injuries in clashes with police on Friday in Ranchi, the capital of Jharkhand state.

Several Muslim-majority countries have also criticized the remarks, and protesters in Bangladesh called for a boycott of Indian products, leaving India’s government scrambling to contain the diplomatic backlash.

Violence has been increasing against Muslims by Hindu nationalists emboldened by Modi’s regular silence on such attacks since he was elected prime minister in 2014.

Marked increase in attacks on Muslims

Muslims have been targeted for their food or clothing, or over inter-religious marriages. The rights groups Amnesty International and Human Rights Watch have accused Modi’s party of looking the other way and sometimes enabling hate speech against Muslims, who comprise 14% of India’s 1.4 billion people, but are the second-largest Muslim population of any nation. Modi’s party denies the accusations.

On Sunday, bulldozers turned Ahmad’s house into rubble after authorities claimed it was built illegally, which Ahmad’s lawyer and family denied.

Read more: India’s Farmers Have Forced Modi to Retreat But He Will Be Back, With More Religious Polarization

“If the construction was illegal, why was no action taken earlier? Why did the government wait until the riot took place?” asked Shaukat Ali of the All India Majlis-e-Ittehadul Muslimeen, a political party.

Officials say the demolitions only target illegal buildings, but rights groups and critics say they are an attempt to harass and marginalize Muslims, pointing to a wave of rising religious polarization under Modi’s rule.

On Saturday, Adityanath’s media adviser tweeted a photo of a bulldozer and wrote, “To the rioters, remember every Friday is followed by a Saturday,” suggesting there would be repercussions.

His words sparked an immediate reaction, with many calling the demolitions a clear punishment.

“It was a threat that if you raise your voice against the government or the BJP, your house will be demolished,” said Lenin Raghuvandhi of the People’s Vigilance Committee on Human Rights.