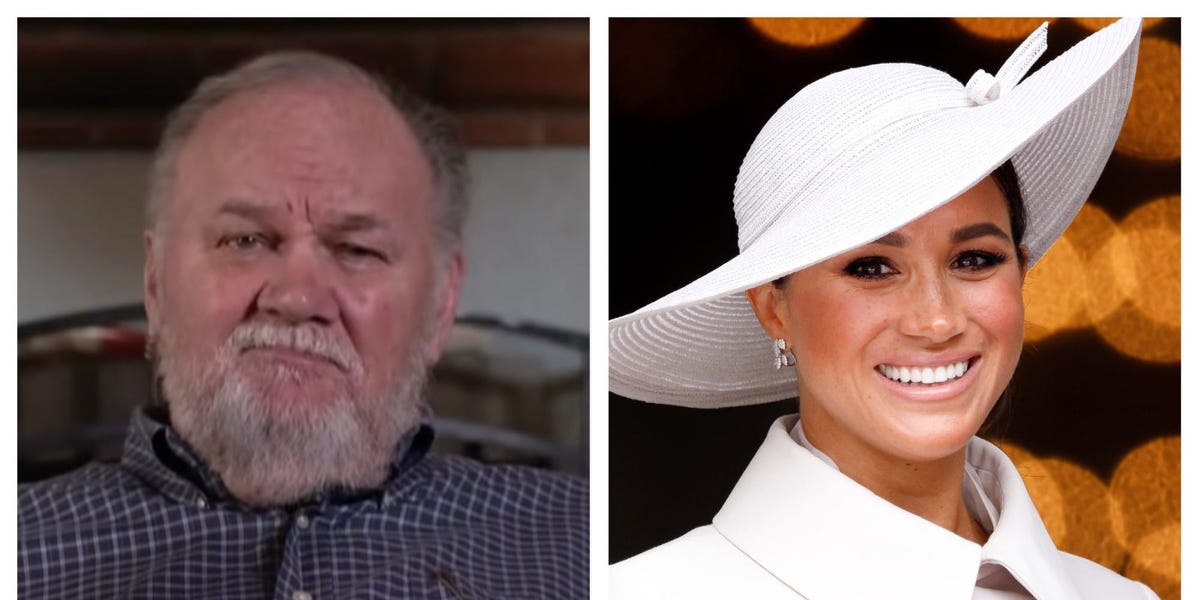 The Duchess of Sussex’s father Thomas Markle told Insider that he had no plans to reunite with her in London earlier in June.

Thomas, 77, was meant to travel to the UK for Queen Elizabeth’s Platinum Jubilee, which Meghan and Prince Harry attended alongside other members of the royal family. But Thomas was hospitalized after having a stroke in May and was forced to miss the celebrations as he recovered at home.

“I had a stroke and was unable to attend the Jubilee and I am still recovering, but it was my intention to come to pay my respect to the Queen, the royals, and the British people,” Thomas said in part of a statement shared with Insider.

“I was invited to the Jubilee by Dan Wootton and Lady C and other friends in Britain, I did not plan on seeing my daughter and Harry,” he added later in the statement.

Thomas was due to appear on a TV special with the journalist Dan Wootton on GB News during the Queen’s Jubilee, Wootton wrote in an article for the Mail Online in May. He had also been invited to stay at the TV personality and author Lady Colin Campbell’s home, Castle Goring in West Sussex, Daily Mail’s Stephanie Takyi reported.

Thomas issued the statement in response to a request for comment following Insider’s interview with Thomas’ YouTube partner, Karl Larsen. The pair co-founded the Remarkable Friendship channel earlier this year, which had more than 18,000 followers on Wednesday.

Speaking to Insider after the Jubilee, Larsen said he attended several events including Trooping the Colour with his wife and his son. Larsen said that Thomas hadn’t shared with him what his plans would have been, had he been well enough to visit London.

He said he didn’t believe Thomas would have reconciled with Meghan, who he hasn’t spoken to since before her wedding in 2018.

“Well, no, because here’s the thing. You know and I know, when you go there… if Thomas had just come with me [to the Jubilee], 99% of the people would have never recognized him,” Larsen told Insider.

“They would never. I don’t think so, maybe you think so,” he added.

Thomas told Insider that he has severed his relationship with Larsen since recording their last YouTube episode. And speaking to Insider over the phone, Thomas’ son, Thomas Markle Jr., said that he was unhappy with Larsen for speaking on his father’s behalf.

Thomas said in a YouTube video published on May 21 that he had arranged his visit to London before the Sussexes announced they would attend.

“I don’t think we’ll bump into each other, I don’t think we’ll go to the same places, but I’m sure there’ll be times when there will be glances between myself and my daughter and my son-in-law, and we’ll just have to play it by ear,” Thomas said in the video.

Harry and Meghan kept a low profile at the Jubilee, attending only a small handful of public events including the Service of Thanksgiving at St. Paul’s Cathedral on June 3, which marked their first joint appearance in the UK since their step back in 2020. They watched Trooping the Colour on June 2 but did not greet fans on the balcony, as per the Queen’s request for only senior working royals to do so.

Representatives for the Duke and Duchess of Sussex did not immediately respond to Insider’s request for comment.

An Impressive DIY Sci-Fi Gets Escorted up the Streaming…