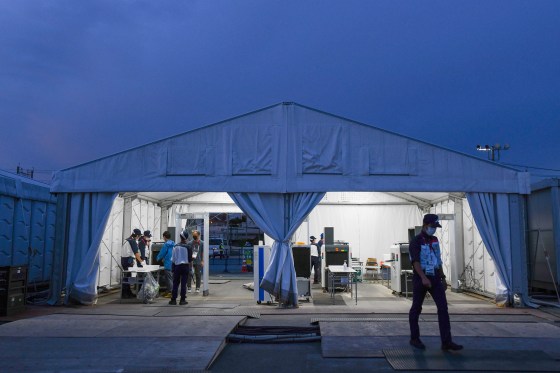 Japanese health authorities have an aggressive testing plan in place for the Tokyo Olympics, but positive COVID-19 tests are already cropping up.

With the Olympics taking place during a pandemic, in a city under a state of emergency, the Tokyo Organizing Committee has created a stringent set of policies governing how athletes and their coaches, trainers and other staff must behave to minimize the risk of both importing infections and spreading disease in the Olympic community. But even with aggressive testing, infections can happen. That’s because the virus is so unpredictable, and even though about 80% of athletes reported being vaccinated, the vaccines can’t prevent infections 100% of the time.

Already, the system has detected three positive cases in the Olympic Village, and at least a few more among athletes training outside of the Village, including the first positive test in a Team USA member, who is an alternate on the women’s gymnastics team. The cases in the Village, among members of the South African men’s soccer team, meant the entire team was isolated and prevented from training together until repeated tests among them continue to be negative.

The strategy for keeping infections to a minimum over the coming weeks involves keeping Olympic-related visitors in as much of a bubble as possible, and testing everyone frequently. Any travelers from abroad are asked to minimize their travel 14 days before their Tokyo-bound flight, and to follow mitigation measures such as wearing masks, social distancing, and hand washing regardless of whether they are vaccinated or not.

Read more: Meet 6 Heroes Who Helped Battle COVID-19 Before Competing in the Tokyo Olympics and Paralympics

Once in Tokyo, athletes will remain in their designated training areas until several days before their competition, at which time they will move into the Olympic Village. To minimize risk of spreading the virus, athletes will dine in shifts or be allowed to bring their food back to their rooms. Most competitors will have one roommate, and are being asked to spend time only with their roommate and a small list of other close contacts such as their coach while in the Village. Each athlete is also required to download a health tracking app and answer daily questions about whether they experience any COVID-19-related symptoms. To get to their training sites or competitions, they can only take Olympic transport in cars or buses in which the drivers are tested and monitored as closely as the athletes are.

Hypothyroid sufferers left in the dark after…

RUBY WAX: Pandemic forced us to face demons we didn’t…

Athletes will be tested daily, and their temperatures will be recorded every time they enter the Olympic Village. Olympic competitors will have two opportunities to spit into a specially bar-coded collection container—either in the morning or in the evening—and must be supervised by the designated COVID-19 Liaison Officer (CLO) of their respective teams. The results of the spit tests are made available about 12 hours later to the CLO, who then follows up with any athlete whose test comes back positive.

To confirm the positive result, athletes will be asked to go to a designated clinic in a dedicated Olympic transport vehicle to the Village for another test, this time, one that involves a nasopharyngeal swab. The athlete will remain in the isolation ward of the clinic for three to five hours until the results are available.

If the confirmatory test is also positive, then the athlete is moved to a dedicated hotel facility outside the Village, again in dedicated Olympic transport. Volunteers arrange to bring the athletes’ necessary belongings to the hotel. In the meantime, the athlete and the CLO work to create a list of immediate contacts—defined as those who were together 15 minutes or more while less than 1 m apart without wearing masks—who will then be asked to get another COVID-19 test.

At this point, the Results Advisory Expert Group (RAEG) will review the case to determine if the athlete and the close contacts can continue competing. The RAEG is made up of eight members and 46 advisors; all eight of the members are doctors, with four having expertise in sports medicine, two in infectious disease and two in public health. The group will review every positive case on a daily basis and determine the risk of having that athlete continue to compete. “It’s hard to believe that they will be able to compete if it wasn’t a false positive, regardless of the sport,” says Dr. Naresh Rao, head physician for USA Water Polo and a member of the Tokyo medical team for the U.S. Olympic and Paralympic Committee. The RAEG provides the results of its reviews to the Infectious Diseases Control Center for Tokyo 2020, which then reports the group’s determinations to the respective Olympic committees of the athletes involved.

The International Olympic Committee has said that any athlete or Olympic personnel who fail to comply with testing procedures or guidance from RAEG can face a range of penalties, from fines to suspension to deportation.

Read more about the Tokyo Olympics:

Denial of responsibility! My droll is an automatic aggregator of the all world’s media. In each content, the hyperlink to the primary source is specified. All trademarks belong to their rightful owners, all materials to their authors. If you are the owner of the content and do not want us to publish your materials, please contact us by email – admin@mydroll.com. The content will be deleted within 24 hours.
Covid-19olympicsTokyo Olympics
0
Share

Bezos says ‘awestruck’ by Earth’s beauty as seen from space

I’m a Pandemic Dad Who’s Been Covering COVID-19. I Don’t Know How to Think About the…