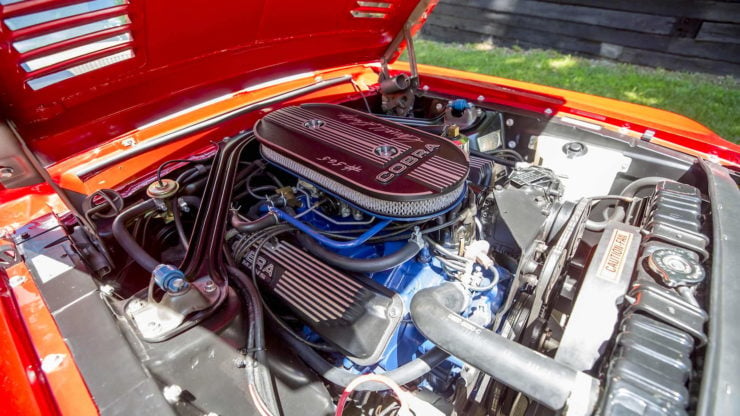 This is a 1968 Shelby GT500, it was the largest-displacement production Mustang to carry the Shelby name thanks to its 428 cubic inch (7.0 liter) Cobra Jet V8, an engine capable of 335+ bhp.

The GT500 is well-known today thanks to “Eleanor” from the Nicholas Cage film “Gone in 60 Seconds.” Eleanor was a fastback Mustang modified to look like a GT500, it single-handedly made the Shelby GT500 famous all over again in the year 2000 when the movie was released.

Carroll Shelby and the Mustang

As the story goes, Carroll Shelby wasn’t all that keen on the idea of building a performance version of the new Ford Mustang when he was approached about it by Ford Division General Manager Lee Iacocca in 1964.

If you look carefully you’ll see the aluminum valve covers with raised lettering that reads “Cobra Le Mans,” that identifies this as a Cobra Jet V8 which means this is a “King of the Road” GT500 KR.

At this time Shelby was busy building the Shelby Cobra, a car he developed by combining a Ford 289 cubic inch V8 with a lightweight AC Ace sports car from England.

Ultimately Shelby would agree to Iacocca’s proposal, both because he needed to keep Ford onside so they would continue supplying him with engines, and because these new “Shelby Mustangs” would add some much needed capital to the Shelby American balance sheets.

The first Mustang to carry the Shelby name was the GT350. Shelby and his team developed a high-performance version of the fastback 289 V8 Mustang, they sold it to consumers to homologate it and took it racing in the Sports Car Club of America (SCCA) B Production Class where it won the championship in its first year.

In 1967 Ford released an all-new Mustang with an updated body design and a larger engine bay that had been developed specifically to accommodate the 7.0 liter 428 Ford V8.

Shelby American developed their own version and called it the GT500, it was labelled the “King of the Road” in period, with the model name often written as GT500 KR to emphasize it. 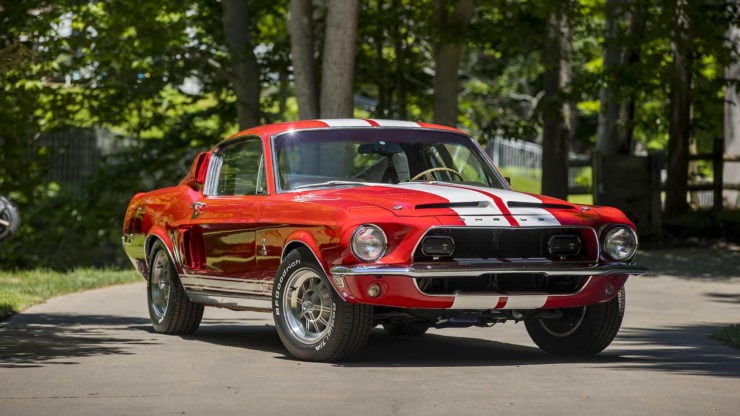 The distinctive look of the Shelby GT500 was modified and used as the car named Eleanor from the movie “Gone in 60 Seconds.”

The first generation of Shelby Mustangs ceased production after 1970 due to the popularity of muscle cars waning, and the federal government taking a renewed interest in vehicle safety and emissions.

This wouldn’t be the end of the line for the Shelby Mustang however, they were brought back into production in 2011 based on the modern Mustang platform and various versions remain in production today.

The Shelby GT500 first appeared for the 1967 model year, Ford had developed an updated Mustang with an all new and slightly larger bodyshell than now had space under the hood for one of their larger 428 cubic inch V8.

The GT500 received lightweight fiberglass parts including the front-end, the hood, the rear tail light panel and deck lid, the quarter panel extension, and side scoops in front of the rear wheels. 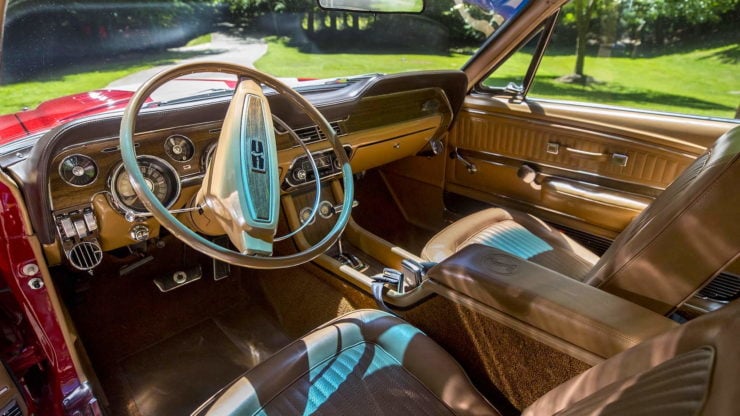 This GT500 has a red exterior with white stripes, a tan interior, and the optional C6 automatic transmission.

The engine produced a claimed 355 bhp at 5,400 rpm with 420 lb ft of torque at 3,200 rpm. In 1968 the cars began receiving the “Cobra Jet” V8. These can be identified by their cast alloy valve covers with raised lettering that reads “Cobra Le Mans” as a reference to the FE-engined Ford GT40 that was dominating the 24 Hour of Le Mans at the time.

These later cars fitted with the Cobra Jet V8 would be given the slightly modified model name Shelby GT500 KR, for “King of the Road.”

The car you see here is a 1968 Shelby GT500 KR, it’s fitted with the desirable 428 Cobra Jet V8 producing 335 hp and 440 lb ft of torque, and power is sent to the rear wheels through the optional C6 automatic transmission. 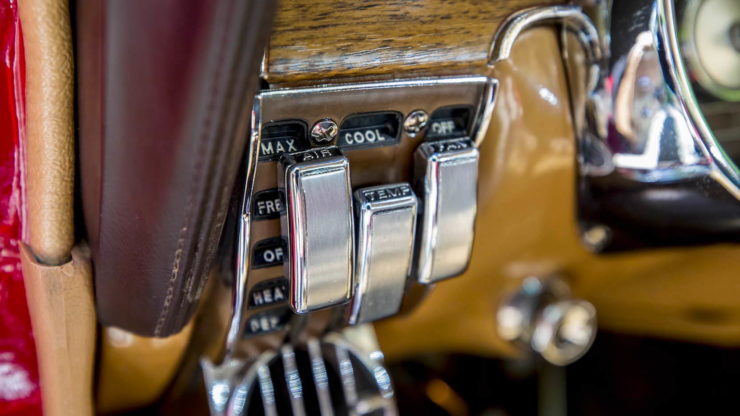 This car was factory-fitted with air conditioning, making it ideal for use as a daily driver so long as the owner doesn’t mind the fuel bills.

This GT500 is listed in the Shelby Registry, it has air conditioning, a tilt steering column, Shelby 10-spoke wheels, and a 3.20 axle ratio.

It was restored in 2001 and it still appears to be in excellent condition throughout.

It’s finished in red with white Shelby stripes and it has a tan interior. This car is due to roll across the auction block with Mecum in late July.

If you’d like to read more about this Shelby GT500 or register to bid you can visit the listing here. 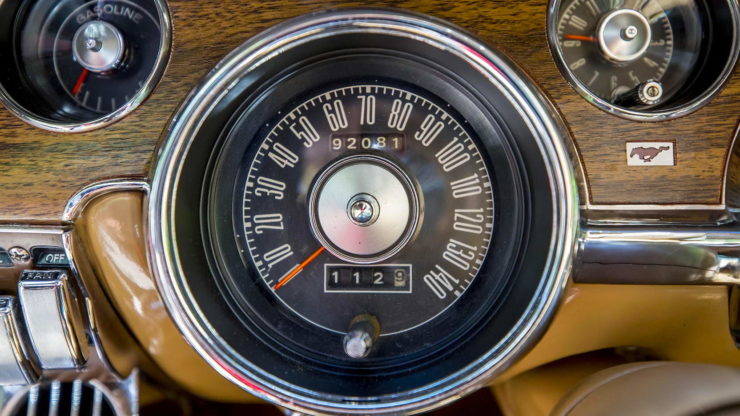 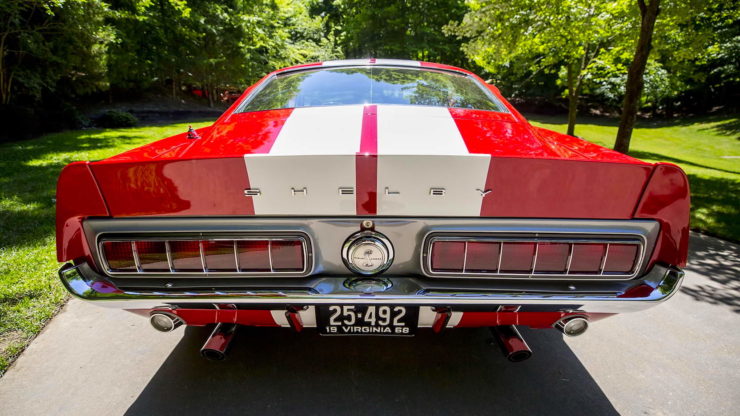 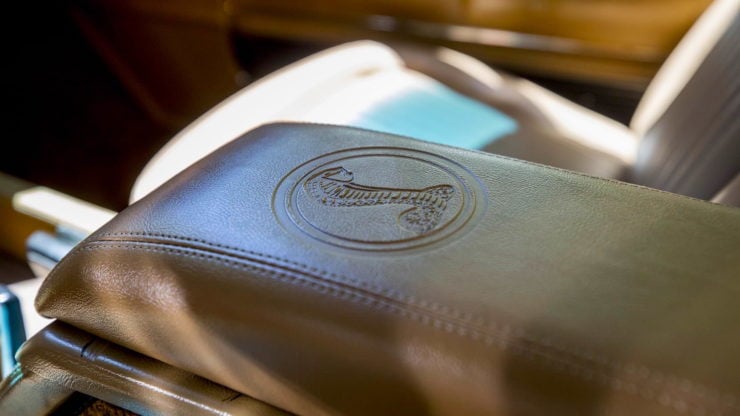 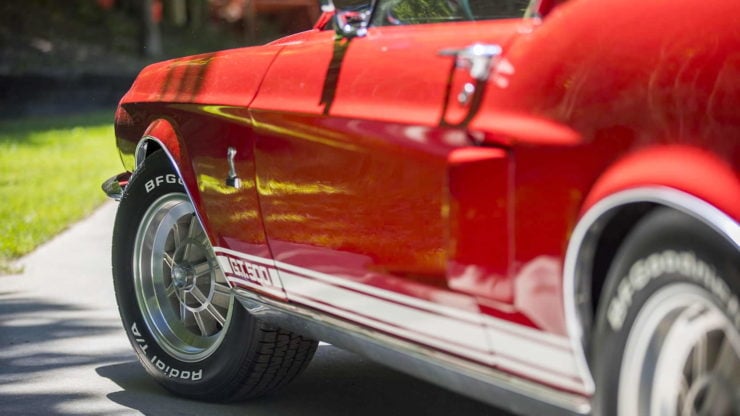 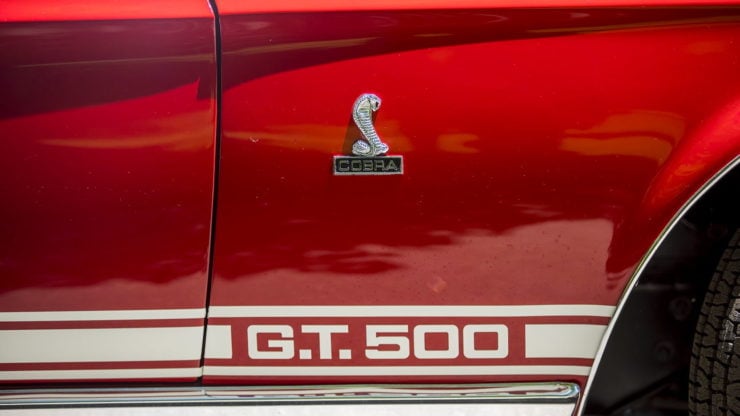 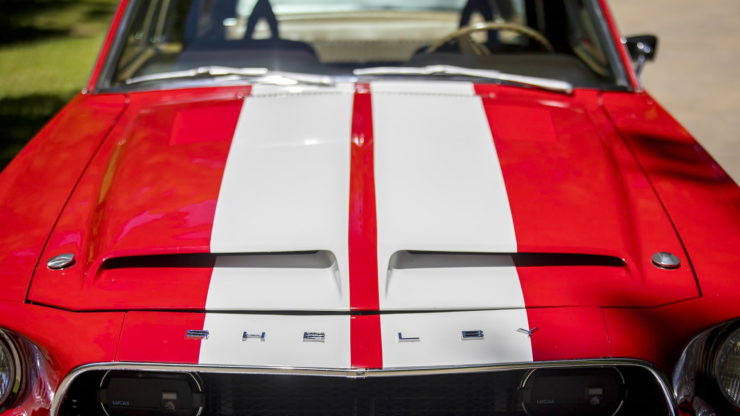 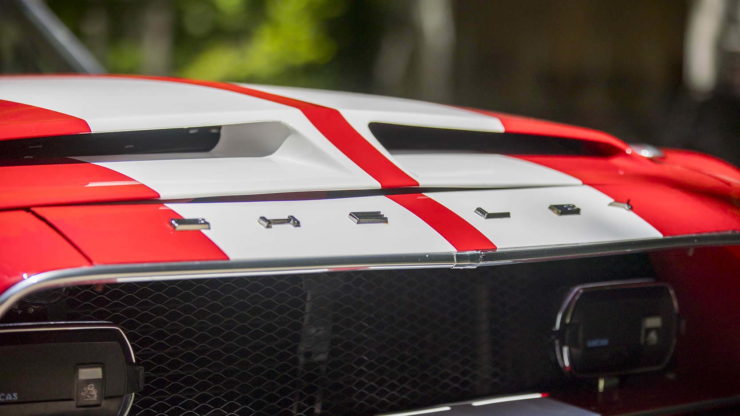 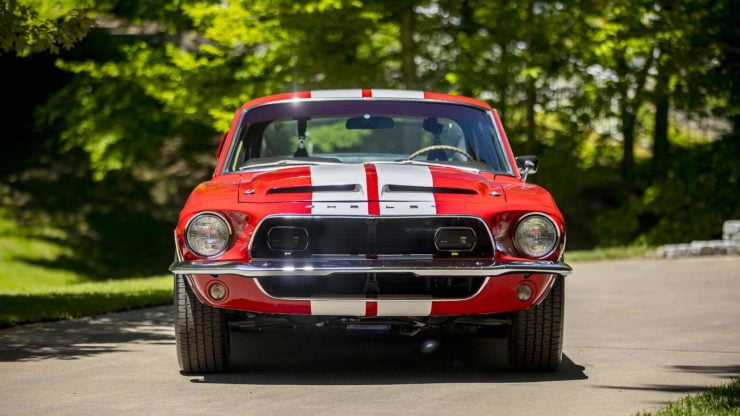 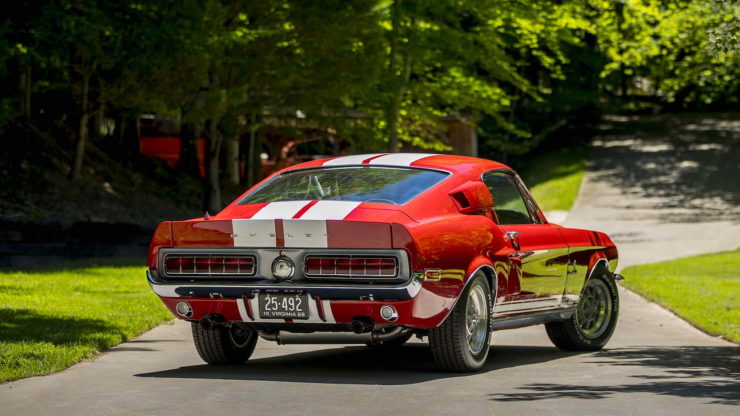 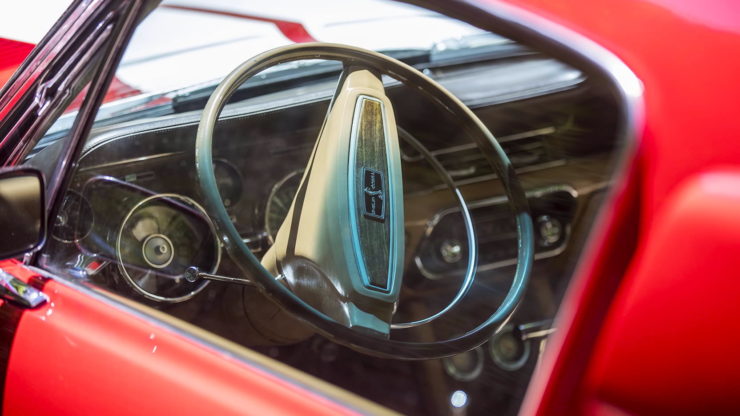 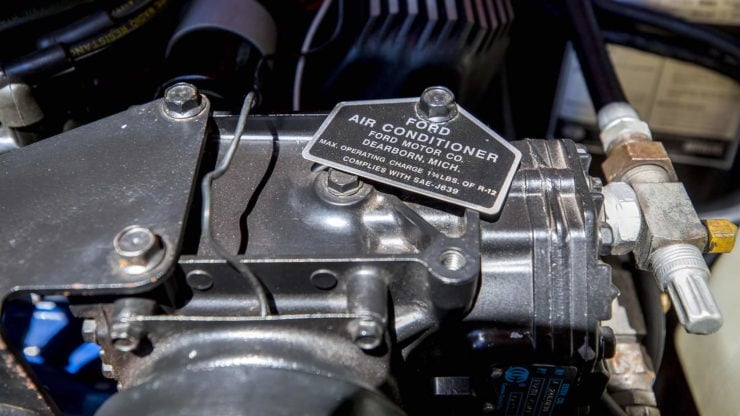 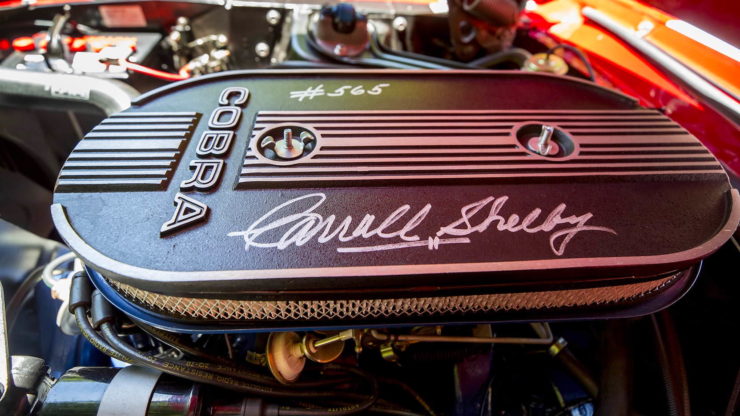 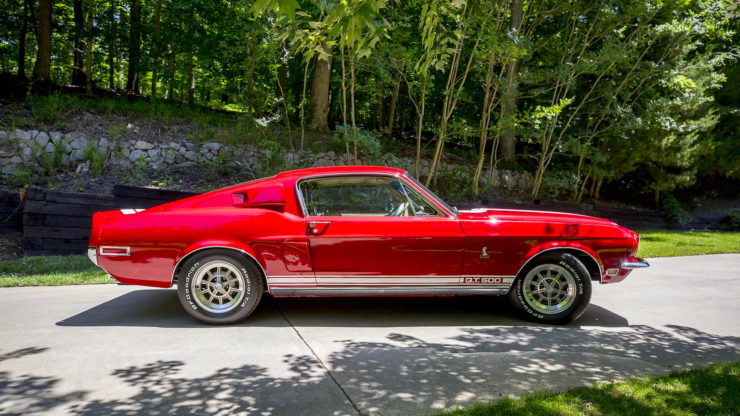 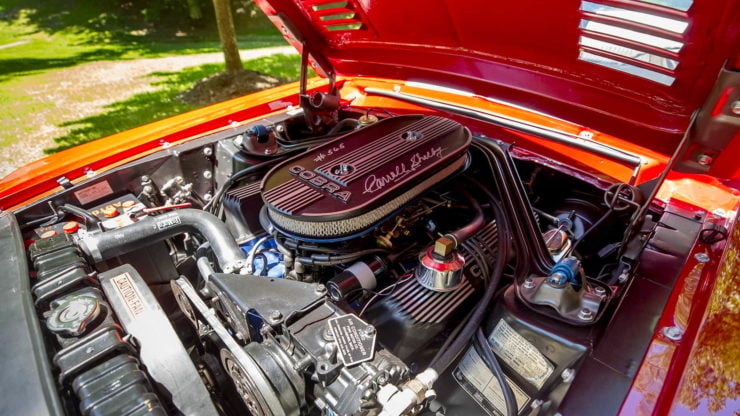 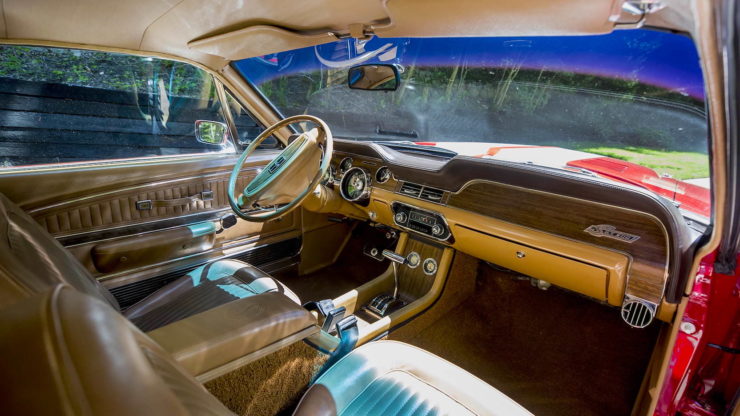 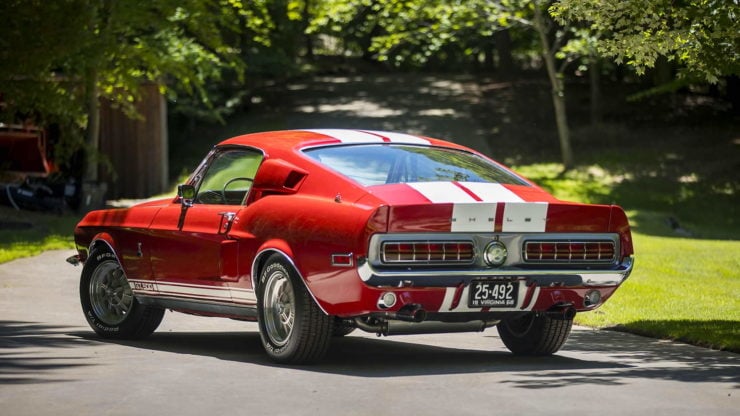 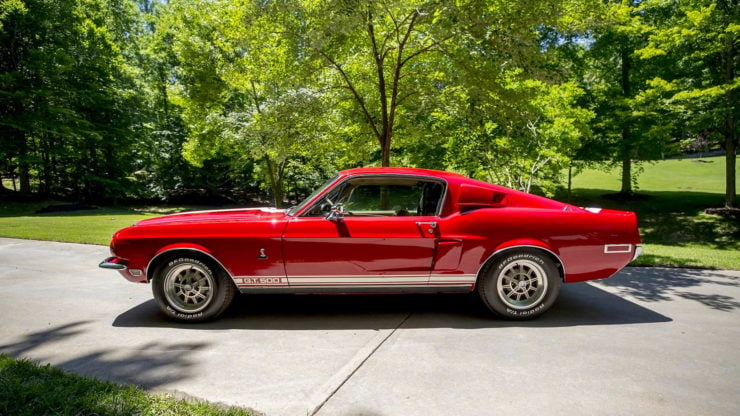