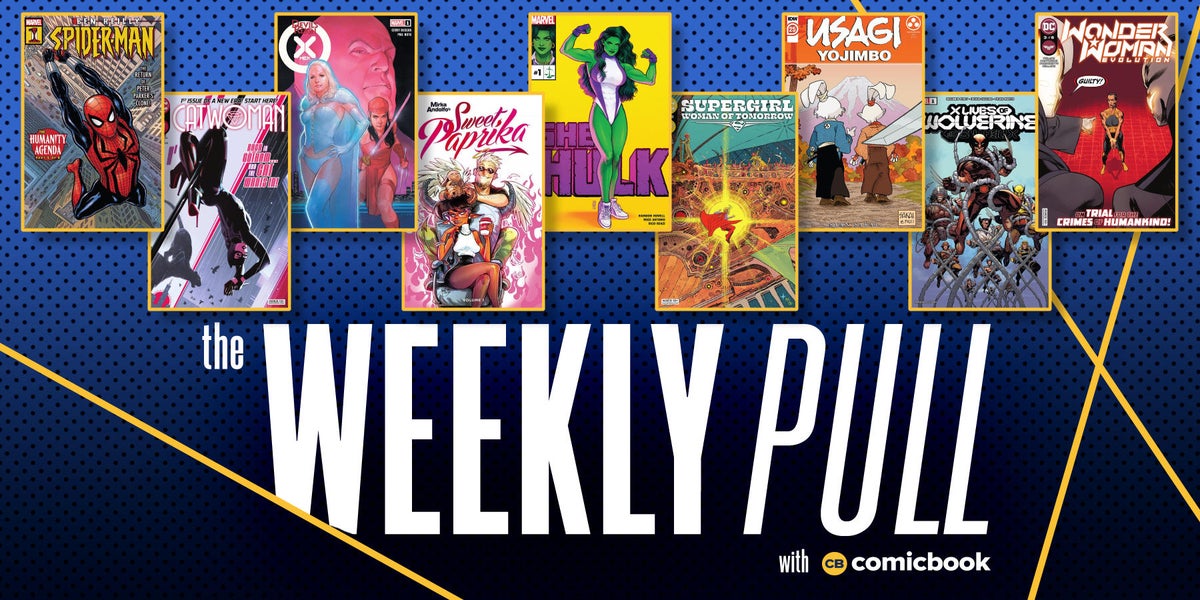 It’s almost another new comic book day, which means new releases hitting stores and digital platforms. Each week in The Weekly Pull, the ComicBook.com team highlights the new releases that have us the most excited about another week of comics. Whether those releases are from the most prominent publisher or a small press, brand new issues of ongoing series, original graphic novels, or collected editions of older material, whether it involves capes and cowls or comes from any other genre, if it has us excited about comic books this week, then we’re going to tell you about it in The Weekly Pull.

This week, Catwoman begins a new era with a new creative team, X Lives of Wolverine starts bridging the gap between Reign fo X and Destiny of X, and the Teenage Mutant Punk Frogs debut. Plus, a new She-Hulk series, Ben Reilly goes solo, and more.

What comics are you most excited about this week? Let us know which new releases you’re looking forward to reading in the comments, and feel free to leave some of your suggestions as well. Check back tomorrow for our weekly reviews and again next week for a new installment of The Weekly Pull.

The current Ben Reilly era of The Amazing Spider-Man has provided the series a much-needed revival with a return to meaningful melodrama, a regular rotation of fun villains, and some of the strangest subplots in some time. A promise to see more of what Reilly’s slightly more woebegone version of Peter Parker presents is more than welcome. Considering it comes from one of Spidey’s most renowned scribes, J.M. DeMatteis, and a talented artist like David Baldeón only makes it clearer that readers should expect a lot. The solicit for Ben Reilly: Spider-Man #1 promises to fill in the gaps of Reilly’s life with remembered adventures. It’s the sort of arrangement that can sometimes deliver lackluster and unnecessary stories, but given DeMatteis’ typical ambition we ought to expect something much more inventive using the timeline to greater effect. Regardless, Ben Reilly has been proving to readers that he has what it takes to star in excellent Spider-Man comics and it’s good to know he’ll hold onto a title of his own even after Parker inevitably returns. — Chase Magnett

After years worth of narrative crafted by Joelle Jones, Ram V, and company, DC’s Catwoman ongoing enters a new era with this week’s issue — and it does so in style. As Selina Kyle dives into a new criminal status quo in Gotham City, her reputation among the world of heroes and antiheroes begins to be put to the test. Unsurprisingly, Tini Howard brings heart, energy, and whimsy to every element of the narrative, and Nico Leon’s art perfectly combines the salt-of-the-earth and glamorous aspects of Selina’s life. This is the perfect jumping-on point for Catwoman and one that I could not be more excited to further explore. — Jenna Anderson

The Kingpin continues to make his mark on the Marvel Universe in Devil’s Reign, but what happens when the Kingpin of Crime funs into the Nation of Krakoa? In Devil’s Reigns: X-Men #1, long-held secrets will finally be brought into the light, and few people have as many secrets as Wilson Fisk and Emma Frost. We’ll find out not only about their secret past, but where Frost’s loyalties lie after Inferno did some damage to her alliance with Xavier and Magneto. There’s a lot on the line, but Emma loves being in the driver’s seat, and her next choice will have some major ripple effects. — Matthew Aguilar

I already know Marvel’s She-Hulk Disney+ series is going to be the highlight of my year, so I am so hyped to be getting a brand new ongoing comic to tie along into that. This debut issue reintroduces readers to Jennifer Walters and her status quo, before bringing in some familiar and surprising faces to shake that all up. After the slice-of-life earnestness that Rainbow Rowell brought to Marvel’s Runaways, I’m very curious to see what she adds to the tapestry of She-Hulk’s story, and it looks like Roge Antonio’s art and Rico Renzi’s colors are going to pack a stylish punch. This will definitely be one of my must-read books this year — and it should be yours too. — Jenna Anderson

The penultimate issue of Supergirl: Woman of Tomorrow is not one to be missed. Not only does it deliver stunning artwork from Bilquis Every with brilliant and beautiful color from Matheus Lopes, but the issue begins to deviate a bit from the series-long mission of finding Krem, the man who killed Ruthye’s father, to solidifying Kara’s legacy as well as Ruthye’s own destiny and story as well. While this has been a Supergirl story, it’s also very much Ruthye’s journey as well and that comes into clear focus in this stunning issue. Don’t miss it. — Nicole Drum

I feel the words “Teenage Mutant Punk Frogs” scrawled onto the issue’s cover ought to be enough to convince anyone to purchase this comic book, but if you somehow need more convincing, then OK. Since taking over writing IDW’s Teenage Mutant Ninja Turtles series, Sophie Campbell has done a fantastic job of turning it into a character and community-focused drama. A few issues ago, the Turtles managed to wrestle control of the developing Mutant Town community from would-be de facto leader Old Hob. Now, after a quiet holiday issue, the Punk Frogs are strolling into town looking like a rival gang ready for a fight. It seems like things are about to get intense for the Turtles. Teenage Mutant Ninja Turtles #125 is a great place to jump aboard this excellent series as the start of an exciting new arc. — Jamie Lovett

Since the jump to IDW, Stan Sakai has continued to make Usagi Yojimbo one of the most reliably entertaining series in all of monthly comics. He has also been developing a foundation, telling a wide range of stories showcasing many of the styles and approaches the series has successfully delivered over decades. Arriving at Usagi Yojimbo #25, it seems like Sakai is building to a canonical Usagi story, the sort that changes the series status quo and offers much larger stakes. Usagi has been traveling with his cousin Yukichi and recently encountered some trouble surrounding Lord Mifune’s legacy. Now they find themselves pulled back into the province they just escaped with further trouble and a righteous search for justice. It’s a confluence of events that guarantees a good story but also promises all sorts of unexpected dangers and grandiose conspiracies. Wherever Sakai plans to take everyone’s favorite rabbit ronin, readers know they can expect an excellent story whatever it brings. — Chase Magnett

The third issue of Wonder Woman: Evolution sees the trial for humankind begin and as a result, the issue starts to get into the charges against humanity that Diana is standing up against. It’s not exactly a unique situation as Wonder Woman often is the character that is seen to carry the weight of humanity on her shoulders as its great protector, but the issue sees Diana answer these charges by also having to deal with her own past and her own failings all while still trying to sort out the rules of this challenge. It’s a book that is a bit introspective which makes it worth picking up to ponder. — Nicole Drum

‘The X-Men are preparing to enter a new era as Jonathan Hickman exits the X-office and Reign of X transitions into Destiny of X. X Lives of Wolverine, along with sister series X Deaths of Wolverine, is positioned as the bridge between the two eras. Wolverine writer Benjamin Percy teams with his X-Force collaborator Joshua Cassara for the most ambitious story they’ve crafted since joining the Krakoan era’s creative stable, sending Logan through time on a mission that could determine mutantkind’s future. Publishing this series using the same model as House of X and Powers of X sets a high bar, but If you’re looking for the next big X-Men story, this is it. — Jamie Lovett

Raid nothing but a political vendetta against me: Punjab chief minister Charanjit Singh Channi