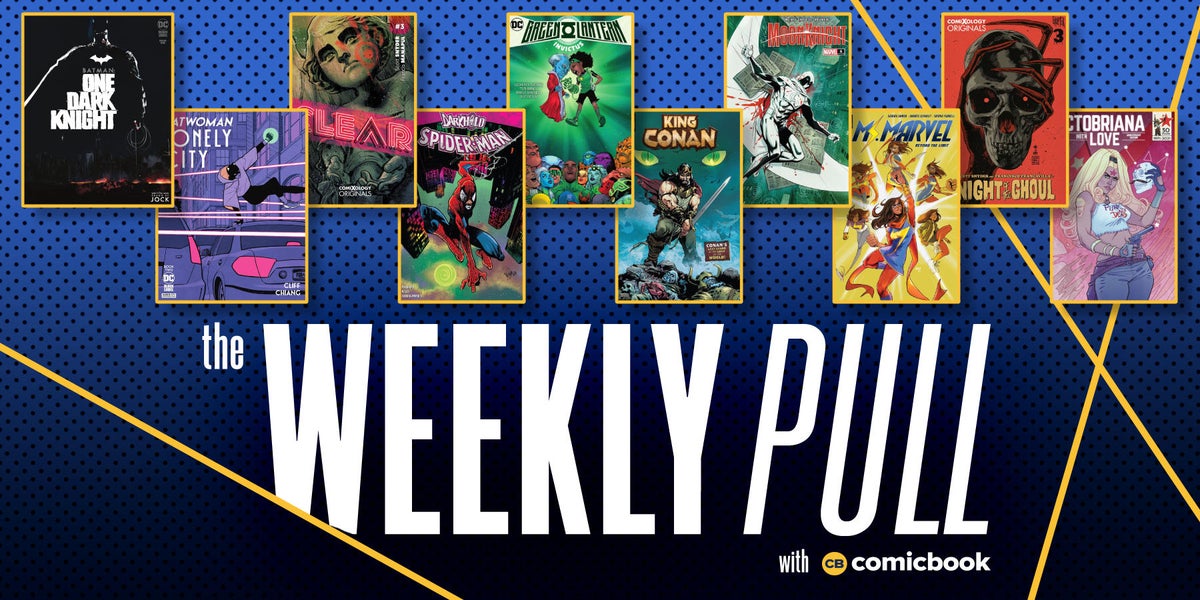 It’s almost another new comic book day, which means new releases hitting stores and digital platforms. Each week in The Weekly Pull, the ComicBook.com team highlights the new releases that have us the most excited about another week of comics. Whether those releases are from the most prominent publisher or a small press, brand new issues of ongoing series, original graphic novels, or collected editions of older material, whether it involves capes and cowls or comes from any other genre, if it has us excited about comic books this week, then we’re going to tell you about it in The Weekly Pull.

What comics are you most excited about this week? Let us know which new releases you’re looking forward to reading in the comments, and feel free to leave some of your suggestions as well. Check back tomorrow for our weekly reviews and again next week for a new installment of The Weekly Pull.

Few modern artists are associated with Batman’s looming shadow more than Jock. His singular style has proven a perfect match for the Dark Knight in stories like The Black Mirror and The Batman Who Laughs. With razor-sharp lines, dynamic designs, and some of the most impressive use of light, shadow, and silhouettes in superhero comics, his vision is perfectly suited to the violent streets of Gotham City. That’s exactly what the new Black Label miniseries Batman: One Dark Knight seeks to explore, too. The story, both written and illustrated by Jock, takes place on a single night when an E.M.P. wipes out the power in Gotham and sends the city into a spiral. Dark streets filled with dangerous criminals and only one man capable of salvaging hope from the crisis is a potent pitch, but in Jock’s hands, it becomes a must-read playing against the acclaimed creator’s greatest strengths. Batman: One Dark Knight already seems to be must-read material for Batman fans of all stripes. — Chase Magnett

The first issue of Catwoman: Lonely City absolutely took my breath away earlier this year, and proved to me just how much-untapped potential there still is in the world of superhero comics storytelling. If they’re not already, the subsequent issues of the series absolutely need to be on the top of your reading list. Cliff Chiang’s take on an older Selina Kyle — and a Gotham City that both she and the reader might not recognize — is effortlessly compelling, with an artistry and a love that can be felt on every single panel. Lonely City #2 is easily the most anticipated book I’m reading this week — and it should be yours too. — Jenna Anderson

There’s no shortage of sci-fi comics out in the world. On the contrary, it sometimes seems like too many otherwise mundane comic stories feel the need to shoehorn in aliens or something another speculative idea to get attention (the reasons why are a whole other can of worms). Because of this, it can be hard to wade through the glut to find the good stuff. Scott Snyder and Francis Manapul’s Comixology Originals series Clear qualifies as the latter. Snyder is scripting a cyberpunk-noir story built on hauntingly relevant themes, and Manapul teaches a masterclass in moody visuals and versatility. With the third issue coming out this week, it won’t take long to play catchup. — Jamie Lovett

So far, The Darkhold has proven itself to be a step above similar strung-together, one-shot events Marvel Comics has published over the past several years. Each issue has provided a different creative team the opportunity to imagine a Twilight Zone nightmare for a different Marvel superhero and, even when the results are uneven, each issue has been interesting at the very least. Spider-Man has crossed into the realm of horror plenty in the past—Amazing Fantasy #15 is as much a horror tale as a superhero one—so it seems the final installment in The Darkhold may also hold the most potential. Combine that source material with an impressive creative team of rising talents, and fans of either Spider-Man or horror comics ought to be intrigued. Writer Alex Paknadel has produced some genuinely skin-crawling terror in past comics work like Roofstompers and Redfork, while artist Dio Neves is well prepared to tackle the nastiest aspects of Marvel Comics following impressive contributions to Sinister War. Read on its own or as part of The Darkhold crossover, this terrifying Spider-Man tale is bound to impress. — Chase Magnett

The talented team of Geoffrey Thorne, Tom Raney, Marco Santucci, Dexter Soy, Mike Atiyeh, Alex Sinclair, Rob Leigh, and AndWorld Design have taken the Green Lanterns out of their comfort zones quite a bit over the past year, and yet the characters’ best aspects still feel like they are front and center. From John Stewart’s leadership and resourcefulness to Jo Mullein’s fearlessness and analytic mind and everyone in between, they all feel true to themselves but in scenarios that push them into new territory. That’s not even covering Keli, Jessica, Sinestro, Simon, and all of the other players on the board that introduce their own twists and turns, and the book’s art team makes sure each of those moments stand out with impact. I’ve really enjoyed what the Green Lantern team has cooked up in 2020, and I cannot wait to see what 2020 holds in store. — Matthew Aguilar

Hey, remember how Marvel published Conan comics? It’s no surprise if you don’t. Marvel put out plenty of fanfare when they reacquired the rights to published Conan comics in 2018, launching multiple series. The highlight was relaunching Conan the Barbarian with writer Jason Aaron (who had successfully made Star Wars into a marquee Marvel title again a few years earlier) and star artist Mahmud Asrar. Conan even came to the Marvel Universe and joined the Avengers. Since then, the heat has fallen off of Marvel’s Conan line. Savage Sword of Conan wrapped after 12 issues, Savage Avengers is about to end, and the flagship Conan the Barbarian series mostly faded from the conversation after the original creative team departed, ending after 25 issues. Now, Aaron and Asrar are back with the six-issue King Conan miniseries, which — given Funcom’s recent acquisition of the Conan intellectual property — could be Marvel’s swan song with the character. Fans of sword and sorcery should check it out. — Jamie Lovett

Marc Spector has found a new mission and purpose in life, though a new enemy brought at least part of that down in flames. Now Moon Knight has to pick up the pieces and pick himself up at the same time as he tries to stop the bleeding because Zodiac is not going to stop until all of what he’s built is in flames. The good news is Spector’s been in this spot before, and Jed MacKay, Allesandro Cappuccio, Rachelle Rosenberg, and Cory Petit have shown how great they are at mining the character’s past to simultaneous build up his future. It should interesting to see where things go, and it certainly will never be boring. — Matthew Aguilar

Ms. Marvel: Beyond the Limit #1

As a big fan of Kamala Khan/Ms. Marvel, I would be remiss if I didn’t recommend Ms. Marvel: Beyond the Limit #1 this week. The book sees Kamala visit her cousin, Razia in Chicago, but there’s no rest for the superhero. It’s a fun, fresh adventure for the character that also leans into her culture in a way we haven’t really seen before so that’s a real treat. Truly, this is a delightful book that you just need to check out because Ms. Marvel is a delight. Don’t miss this one. — Nicole Drum

Night of the Ghoul #3

I’m always a little reluctant to suggest books from series in progress when making my weekly recommendations, but I just can’t help myself when it comes to Night of the Ghoul so consider this as much a recommendation for the series thus far as specifically for Night of the Ghoul #3. This pulpy, noir-esque, old-school horror story keeps getting better and better as the story of the mysterious titular film unfolds while, simultaneously, a terrifying tale of an ancient evil in the real world also unfolds. Issue #3 continues both stories, but ups the ante a bit by taking the reader more into one of its main characters’ life, Inman — the man who was seeking out the story of the film. It just takes things to a new level and hooks the reader in a way that makes it a must-read (and a solid antidote to holiday cheer if Christmas isn’t really your thing this week.) — Nicole Drum

To put it simply, Octobriana is the coolest superhero you’ve never heard of. The Russian heroine first made her debut in the 1970s (with lore surrounding her creation that is blockbuster-worthy in its own right), and has always existed in the public domain, allowing her to pop up in whatever comics and stories a creative team chooses. While the immortal warrior has spawned tributes from Billy Idol and (almost) a film adaptation by David Bowie, she still remains relatively unknown to comic readers. Luckily, this week’s Octobriana With Love — a softcover graphic novel celebrating her fiftieth anniversary — is the best opportunity yet to dive into her world. With an impressive roster of creatives including Stephanie Phillips, Marguerite Sauvage, and more, this is sure to be an accessible and entertaining showcase of the best superhero you’ve never heard of. — Jenna Anderson