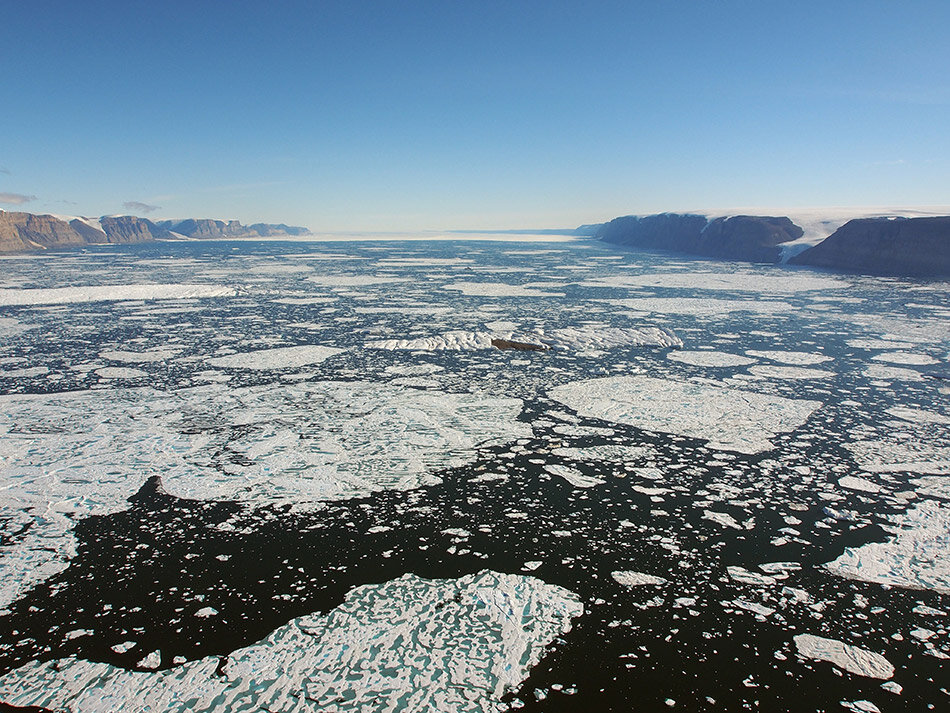 The type of material present under glaciers has a big impact on how fast they slide towards the ocean. Scientists face a challenging task to acquire data of this under-ice landscape, let alone how to represent it accurately in models of future sea-level rise.

“Choosing the wrong equations for the under-ice landscape can have the same effect on the predicted contribution to sea-level rise as a warming of several degrees,” says Henning Åkesson, who led a new published study on Petermann Glacier in Greenland.

Glaciers and ice sheets around the world currently lose more than 700,000 Olympic swimming pools of water every day. Glaciers form by the transformation of snow into ice, which is later melted by the atmosphere in summer, or slides all the way into the sea. With climate change, glaciers are breaking up and drop icebergs into the ocean at an accelerating pace. Exactly how fast depends to a large extent on the bed below all the ice. Glaciers conceal a landscape under the ice covered by rocks, sediments and water. A new study shows that the way we represent this under-ice landscape in computer models means a great deal for our predictions of future sea-level rise. More specifically, how we incorporate the friction between the ground and the ice sliding over it in glacier models is what affects our predictions. This was found by a team of Swedish and American scientists, when they simulated the future of Petermann Glacier, the largest and fastest glacier in northern Greenland.

Petermann is one of the few glaciers in the northern hemisphere with a remaining ice tongue, a type of floating glacier extension otherwise mainly found in Antarctica, where they are called ice shelves. These floating extensions have been found to be exposed to warm subsurface water flowing from the open ocean towards the glaciers. This happens both in Antarctica and in many fjords around Greenland, including the Petermann Fjord.

“Peterman lost 40% of its floating ice tongue over the last decade. It still has a 45 km tongue, but we found that a slightly warmer ocean than today would lead to its break up, and trigger a retreat of the glacier,” says Henning Åkesson, a postdoctoral researcher at Stockholm University who led the study.

Many glaciers in Greenland and Antarctica flow towards the ocean much faster than they did a few decades ago, and therefore contribute more to global sea-level rise. Scientists have therefore mobilized great efforts into learning what is going on in these environments. This has spurred new insights into the landscape under glaciers and the shape of the seafloor where they drain. We now also know much more about what happens to the ice when glaciers meet the sea.

Still, the remote polar regions are notoriously difficult to study because of sea ice, icebergs, and often harsh weather. The under-ice landscape is a particular challenge because, frankly, it is hard to measure something covered by a kilometer of ice on top. Even in areas of known under-ice topography, describing its physical properties using mathematical equations is difficult. Computer models are therefore still somewhat in the dark when it comes to how to represent things like sediments, rocks, ponds and rivers under glaciers in the equations that describe ice flow. These equations are ultimately the foundation of the models used by the IPCC to estimate how fast glaciers flow and how much sea levels will rise under future climate warming.

“As we said, choosing the wrong equations for the under-ice landscape can have the same effect on the contribution to sea-level rise as a warming of several degrees,” Åkesson says.

“In fact, predicted sea-level rise for this Greenland glacier can quadruple depending on how we represent friction under the ice. We still don’t know which way is the best, but our study illustrates that ice-sheet models still need to progress in this respect, in order to improve our estimates of mass loss from Earth’s polar ice sheets.”

How Apple may have created around 20,000 jobs in India