The Pepper Pod: A Retreat for Women Veterans in Chelsea, Que. 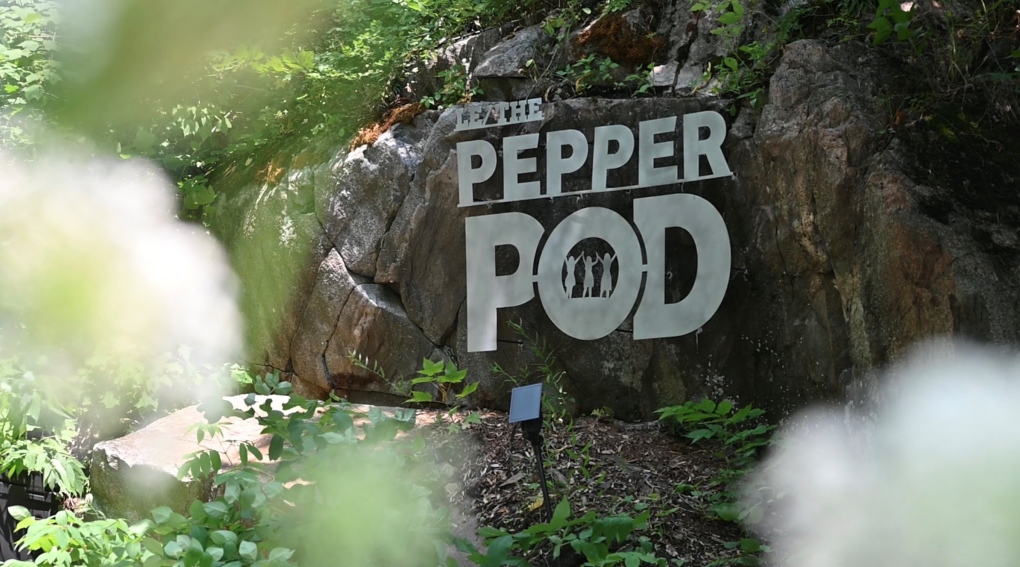 Sandra Perron is at the controls of a Kubota, using its large steel bucket to strategically nudge flagstones into place outside of her Chelsea, Que. home.

Perron didn’t know much about operating the machine when she rented it.

But that didn’t bother her.

“Well, I’ve driven tanks, so I thought how hard can it be?” she said with a smile.

So, the Kubota is just another welcome challenge in Perron’s world of firsts.

“I went on YouTube, looked up a few things, and then I practiced.”

Perron’s art of practice was first learned as a teenager, while dreaming of a future in the Canadian military.

“When I was 14, I joined Cadets, the Airborne Cadets in Edmonton,” she said, beaming as she recounts her youth.

“From then on, they were my family. I wanted to be in the military for the rest of my life,” she said.

“I wanted to die, perhaps a General on the battlefield, and I wanted that to be my life-long career.”

She was at the top of her class during training, deployed to Bosnia, and later serving valiantly in Croatia as a Platoon Commander.

Despite her devotion and superlative service, Perron says she was subjected to unrelenting abuse and harassment by some men in the Forces who believed women had no place in combat.

“I wanted to climb mountains with people who would help me along the way, not trip me up,” she said.

“There were many good guys who went out of their way to make sure I was safe, but unfortunately, for the most part in my career, there were men who were intent on harassing, on abusing, and making sure that I would leave,” she said solemnly.

After 15 years of service, Perron did leave.

“I had battle fatigue. Not from serving in Bosnia or Croatia, but from defending my right to defend my country,” she said.

Perron said many of the men responsible for harassing her have sent letters of apology.

Despite her experiences, she still considers the military to be “very much my family.”

Still, she was forced to walk away from the only career she had ever wanted. And Perron said she struggled to transition from the military to a life as a civilian.

“That was one of the hardest periods of my life,” she said.

“It was even harder because I had very few women friends to talk with, to share with, to go through that transition into civilian life with, which is why I built this place.”

According to Pepper Pod founder Sandra Perron, to ‘pepper pod’ in the military is to “advance toward the enemy while covering your buddy.” (Joel Haslam/CTV News Ottawa)

Perron’s “place” of refuge, comfort and calm is nestled in the Gatineau Hills.

It’s a retreat centre for female veterans and women about to leave the military called the Pepper Pod.

“To ‘pepper pod’ in the military is to advance toward the enemy while covering your buddy. This what we do here.  We help each other out when we’re transitioning out of the military or having different challenges in our life,” she said.

“She’s dedicated to creating a generation that follows us that has opportunities and has strength in their core and confidence in their soul.  She brings out the best in people and helps them develop it,” said Priestman.

“I had been out of the military for 22 years but was profoundly shocked by how the Pepper Pod helped me close that chapter of my life.  When I left the military, I didn’t leave because I was bitter or sad.  It was just the right time of my life.  Still, I missed it so much.”

“Coming back here, I felt like I was still part of a family, even though I wasn’t wearing a uniform anymore.  And it really helped with closure two decades later.”

The Pepper Pod offers a series of Life-Shops, inspirational events and educational programs.

Participants are bonded by their shared military pasts.

“If you talk to a neighbour, or even a high school friend, they’ll never know what you actually went through or what your experiences were,” said Maj. Susan Cummings.

“But amongst ourselves, we get that.”

“It’s like we’ve known each other forever, and you just can’t make those bonds anywhere else.”

Cummings is still in the military but has attended a retreat at the Pepper Pod to help her, “figure out what’s next.”

“It’s a fantastic weekend.  We were together for 48 hours and within 12 we were best friends. Sandra has this way of establishing a safe and open environment.  There was lots of laughter and lots of tears,” said Cummings. 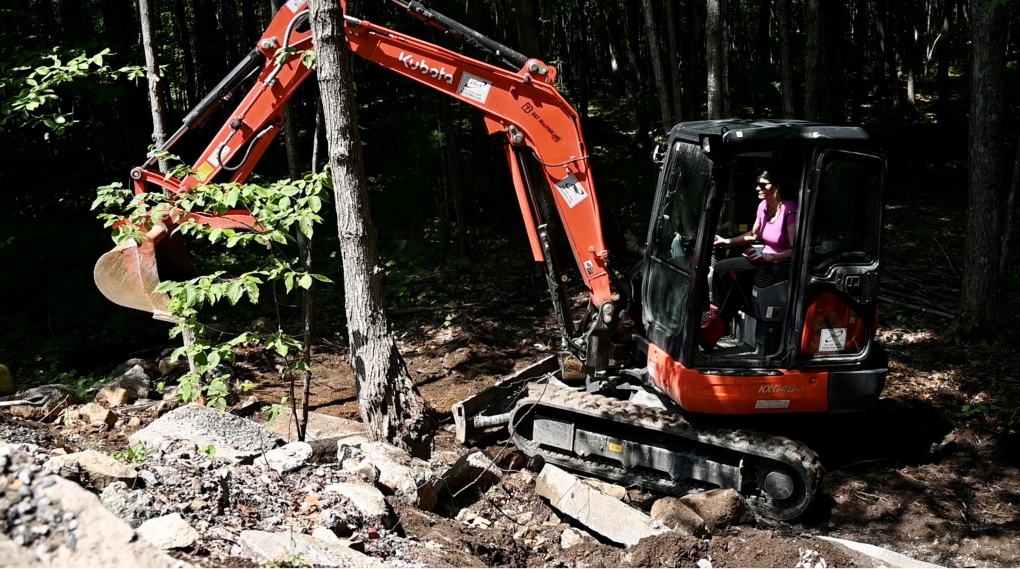 Sandra Perron aboard a Kubota, changing the landscape on her property, along with the landscape for Canada’s women veterans at her Chelsea, Que. Retreat Centre. (Joel Haslam/CTV News Ottawa)

“Within 48 hours we were able to laugh and cry and share. And there were no barriers.”

Welburn retired from the military in 2013.  She started in the infantry and became a supply technician.

“I was so grateful to be a part of one of Sandra’s transition workshops. This is a safe place to share the good, the bad, and the ugly, and to leave with your soul recharged.”

“I hope she keeps building on this, and it becomes a national resource that others can fully take advantage of and leave with their hearts full,” said Welburn.

“This retreat centre allows women to lean on each other, to build friendships, deep, meaningful sisterhood friendships,” said Sandra Perron.

“When you become vulnerable, it’s like putting down your weapons.  You’re easy to love and that’s what happens.”

“Within 40 hours, they’ve developed deep bonds with the other women around the table, and have learned a lot about themselves through the eyes of those women,” she said.

“They grow and strengthen and sometimes they heal.  It’s magical.”

For moments of solitude and reflection, there’s a meditation room. 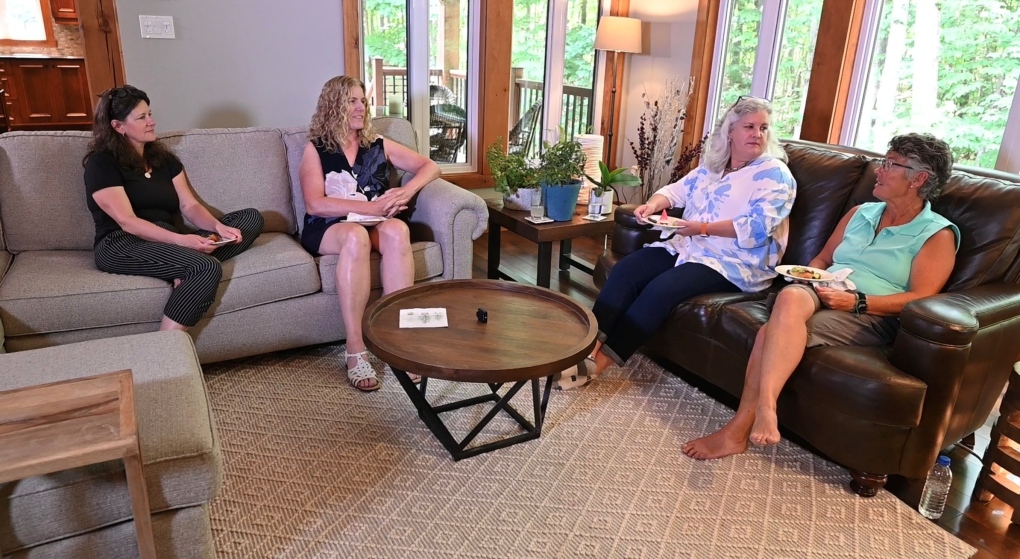 A space where women can be candid in the company of others who understand.

“When someone’s in pain you just feel for them,” said Susan Cummings, tears filling her eyes.

“And just talking about it makes me think of people who have been in pain,” she said, her voice breaking.

“They’re not all tears of sadness, there are tears of joy, as well. I would say this place goes through a lot of Kleenex,” she said with a laugh.

After our interview, Perron again climbs into the cab of her rented Kubota and begins moving the controls.  She’s doing much of the work on her Chelsea property herself. It is an effort to save money that could be used, instead, on Pepper Pod programs.

Many sponsors help her operate this place, but the costs are significant.

“This place costs a lot of money,” she said.

But for Perron, no price is too high to give her military sisters the gift of each other.

That’s why she’s determined to change the landscape for generations of women. 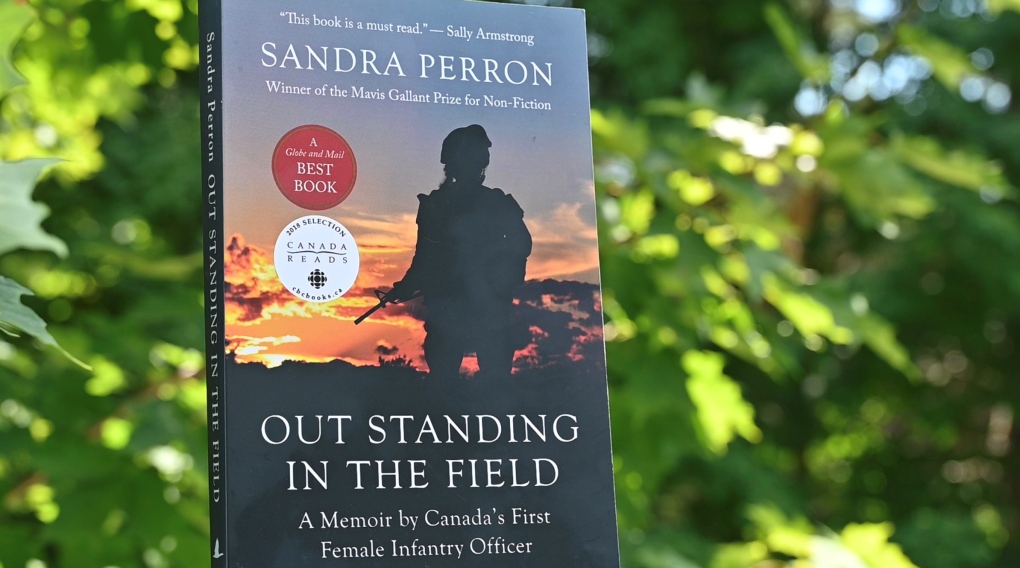 Sandra Perron’s poignant award-winning memoir “Out Standing in the Field” is a compelling account of her journey to become Canada’s first female Infantry Officer and the first female member of the Royal 22nd Regiment, the legendary “Van Doos.” (Joel Haslam/CTV News Ottawa)

She said the Pepper Pod has the support of Canada’s top military leaders.

“Very humbly, I think women are saving their lives by coming here.  To be vulnerable, to share their story, to connect with other women, it takes courage. They come here to have a different life. They’re doing that.  I’m just creating the space,” she said.

“It makes me do cartwheels of joy to see them leave with tools, friends and hope.”

“I can’t think of anything that would set my soul on fire as much as this. I’m the luckiest person in the world.  I feel blessed.”

The Pepper Pod is hosting a Garden Party and Open House on Saturday, Aug. 6 from 1 p.m. to 4 p.m.  The Retreat Centre is located at 35 Chemin Nordik in Chelsea, Que.

To celebrate its first-year anniversary, the Pepper Pod Gala is holding a gala on Sept. 10 at the Canadian War Museum. Tickets and information are available at pepperpod.ca.