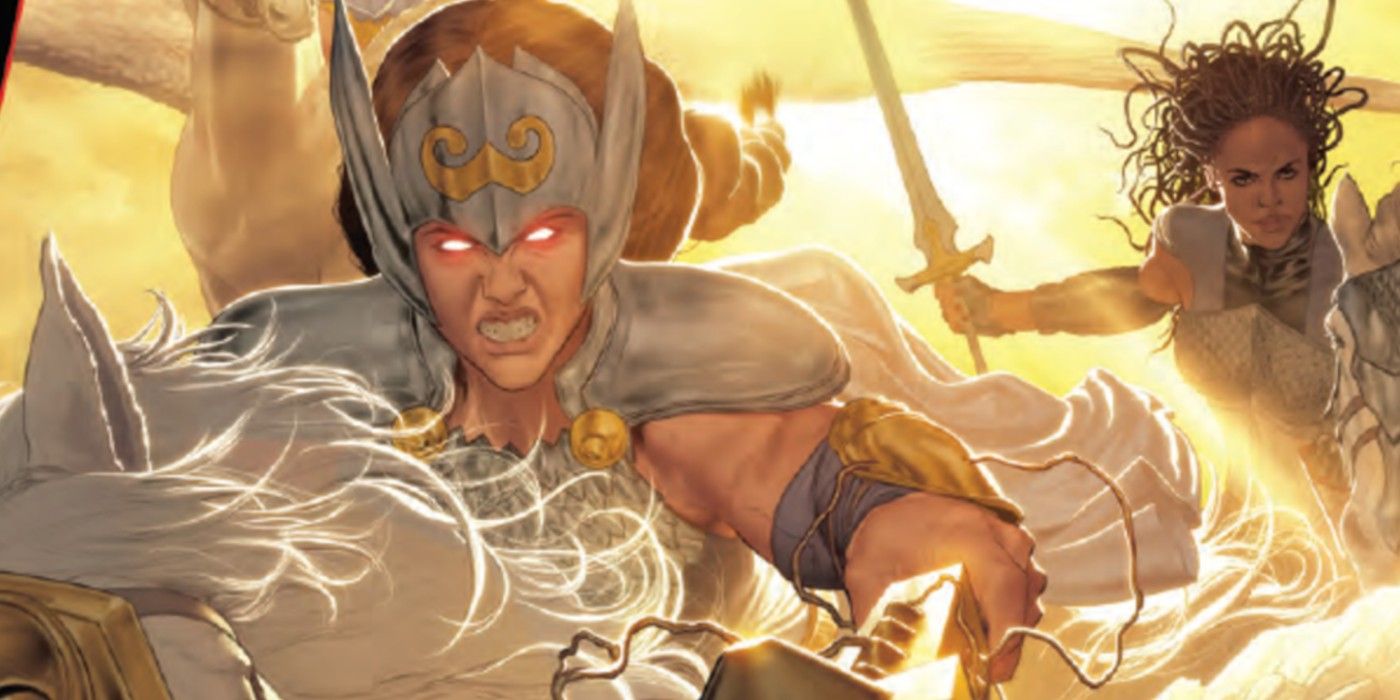 As Jane Foster helps the strongest Avenger move on, she discovers the dead body of a powerful god, and it might change everything for the Valkyrie.

The Marvel Universe is in a dark place, and not just because of the terror that the King in Black has spread throughout the galaxy. As Knull’s attack on the Marvel Universe began, the Sentry, one of the few heroes to make it out past Knull’s reach on our world was unceremoniously torn in half when he attempted to dispatch the dark god of the symbiote. Now, Jane Foster is at his side to bring his soul to Valhalla, but what they find along the way is even worse than death in King in Black: Return of the Valkyries #1.

Jane Foster has taken up the mantle of Valkyrie since she lost her role as the God of Thunder. She listens as the spirit of the Sentry waxes poetic over the side of his own mangled corpse. They discuss his death and the nature of it as a concept, with the Sentry being caught up in the depth of it all while Jane offers a kind ear and supportive words. The two look down on the Earth, both seeing it covered in Knull’s black tendrils, but only the Valkyrie seeing the sheer volume of death that is soon to come. Not telling the Sentry of what is to come is even described as merciful before the two depart for Valhalla.

And on their way, the two heroes discovered the slain body of a dead Celestial.

As the two explore the space that exists between the realm of the living and that of the dead, Jane’s focus is drawn to a buzzing, and as it grows closer she recognizes the decapitated corpse of a Celestial slain eons ago, with a red, viscous substance moves along entwined with black, metal tendrils carrying the remains of beings long since passed on.

This body could even belong to the Celestial whose head became Knowhere. Before anything else existed in the universe, there was the darkness, and there was Knull. When the Celestials brought their light of creation into being, they disrupted Knull’s slumber, so he reached into his newly cast shadow and from it, the first symbiote, the All-Black, was born. With his blade of living darkness, Knull beheaded one of the Celestials, beginning his campaign of deicide that would stretch across the galaxy before he was imprisoned. Before being locked away, Knull repurposed the skull of the slain celestial as his own base of operations and forge world, a place where he could hone and perfect his craft of creating a symbiote which would come to be known as Knowhere.

Whether or not Jane Foster has found what remains that particular dead Celestial, she is confronted with what it has become. The body is not only covered in the violent and relentless dead, but it also contains a place beyond any other realm she has seen. Jane strikes one of the undead constructs with her blade, shattering the metal body into fragments in which she can hear and feel the screams of those whose fates led them here. The Sentry becomes just another of their captives, and when Jane strikes against the mass into which he has been dragged she discovers an entire other world behind it. Standing there in some unreal place and time is an unnamed woman wearing similar armor. Jane nearly loses herself in the darkness, but the mysterious new hero gets her free.

Though her new ally is yet unknown to Jane Foster, she is of course revealed to be one of the original nine Valkyrior, slain by a dark presence long, long ago. If she can confirm that this is indeed Knowhere, it could prove to be vital to understanding Knull’s origins, possibly even a way to actually put up a fight against him. If the lost souls that Jane saw are of those that Knull has slain, or are connected to him in any way, it could very well also be a way to hurt him.

King In Black: Is a Major MCU Hero Destined to Be Marvel’s Anti-Knull?