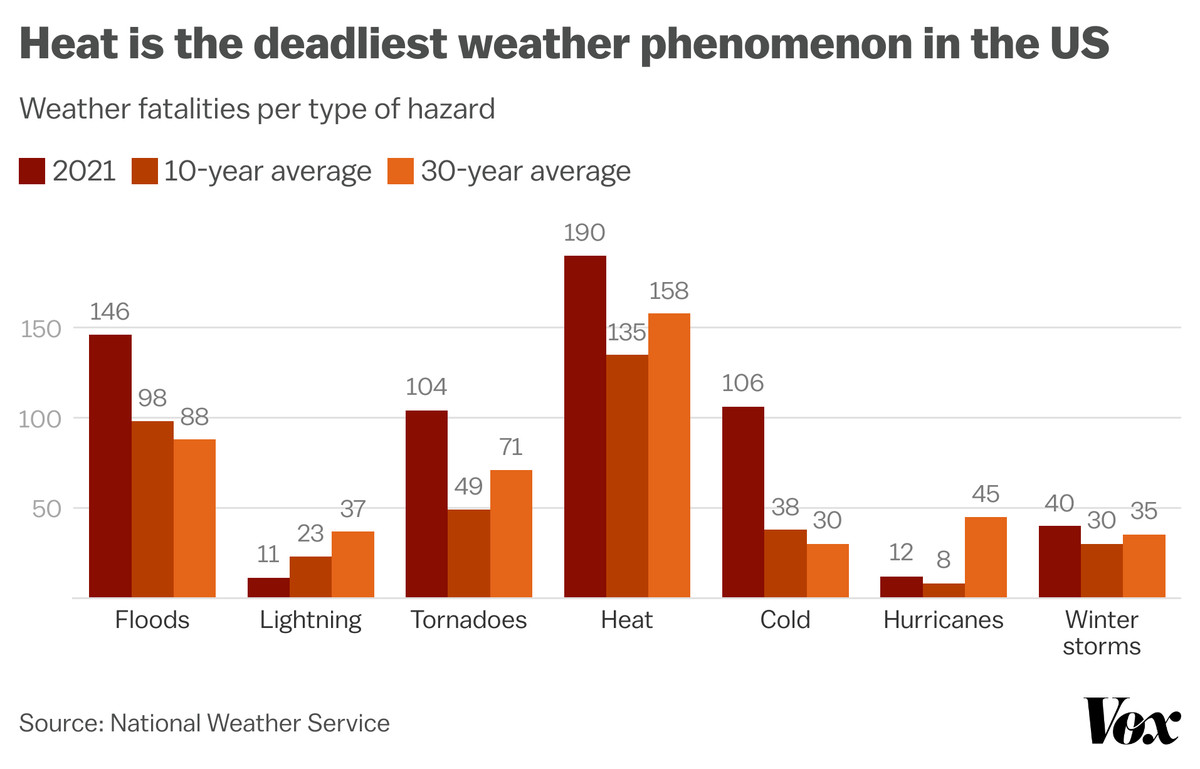 We talk about heat waves in a weird way.

Natural disasters like hurricanes and wildfires are (rightly) accompanied by warnings of their danger. They bring a visible, elemental fury that’s hard to ignore. Heat, on the other hand, is invisible and insidious. We feel it on our skin, radiating from the sun or bouncing off asphalt and concrete, but we don’t see it the way we see, say, floodwaters carrying cars down the street. That makes heat waves easy to dismiss as quirky summer weather.

“Heat is an interesting hazard because it can kind of creep up on you,” said Jennifer Marlon, a research scientist at the Yale Program on Climate Change Communication. “It tends to affect millions of people at a time, and a lot of people don’t realize the danger.”

But heat is the deadliest weather phenomenon in a typical year in the United States, killing an average of 158 people annually in the 30 years from 1992 to 2021, and climate change is only going to make heat waves more common. We already categorize tornadoes, and we name wildfires. Hurricanes get both. Would extending those ideas to heat waves help?

“Naming hurricanes has been really effective,” said Kathy Baughman McLeod, director of the Atlantic Council’s Adrienne Arsht-Rockefeller Foundation Resilience Center (Arsht-Rock), which studies climate resiliency. Hurricane-prone communities tend to have what McLeod called “a culture of preparedness and prevention,” where residents know how to prepare for storms of varying intensity. Residents who decide to ride out a weaker storm at home, for example, might board up their windows and store a few days’ worth of water. “Heat waves need that branding, that identity,” McLeod said.

To figure out how that branding might work, scientists at Arsht-Rock are running pilot projects in six cities — Los Angeles, Miami, Milwaukee, and Kansas City in the United States, along with Seville, Spain, and Athens, Greece — to test-drive a heat wave categorization system they developed. In July, Seville became the first city in the world to give a heat wave a name: Zoe. Spanish authorities ranked the heat wave at Category 3, indicating the highest level of risk.

Categorizing heat waves isn’t easy. “The same heat wave can create very different impacts depending upon when and where it occurs,” said Larry Kalkstein, Arsht-Rock’s chief heat science adviser and president of Applied Climatologists, Inc, a climatology lab that studies the effects of extreme weather on human health. “You can have two cities with almost identical weather, and you’ll still need two different categories.”

New York City and Philadelphia, for example, are close enough to each other that they tend to experience similar weather conditions on most days, but local conditions make a difference to how the residents of each city experience heat. That means heat waves can’t simply be categorized by temperature.

The National Weather Service uses a metric called the Heat Index that combines relative humidity with air temperature to give an idea of how heat actually feels, and an accompanying chart provides an idea of what effect that heat will have on the body. But while the heat index provides a better understanding of how heat might feel, it’s essentially an enhancement of the temperatures we already know. That means it runs the risk of being just as easy to ignore or underestimate.

Kalkstein and his colleagues instead developed a system that looks at historical weather and mortality data from past heat waves to determine what combination of weather conditions — heat, humidity, overnight temperatures, cloud cover, and more — leads to the most excess deaths in a particular region. From there, they developed an algorithm that compares the conditions of an incoming heat wave against that data, determines its likelihood of causing excess deaths, and then issues a category based on expected mortality. The categories come with recommendations for steps cities and their citizens should take to safeguard from the heat.

This is a notably different approach from most weather warning systems. Meteorological agencies usually issue warnings based on weather conditions alone. Hurricanes, for example, are solely classified according to wind speed.

“We’re suggesting an approach that is linking health and weather together,” said McLeod. “So there’s going to be obvious discomfort for meteorological agencies because they’re not health agencies. That’s a big change.”

The idea is already getting some pushback. In July, the World Meteorological Organization (WMO), a UN agency that coordinates weather data and planning across the world, released a statement saying it had no plans to name heat waves.

“What has been established for tropical cyclone events may not necessarily translate easily across to heatwaves,” the agency said. “Caution should be exercised when comparing or applying lessons or protocols from one hazard type to another, due to the important differences in the physical nature and impacts of storms and heatwaves.”

A 2017 study showed that naming winter storms — as the Weather Channel started doing in the US in the 2010s despite pushback from the National Weather Service — didn’t necessarily raise awareness of the storms, though that study’s sample size was limited to a few hundred college students. But pushing ahead with names and categories risks undermining the WMO and country-level agencies like the National Weather Service, according to Kristie Ebi, founding director of the University of Washington’s Center for Health and the Global Environment.

The system for naming and categorizing hurricanes is overseen by the WMO, which allows for cross-border coordination. Ebi said a system like Arsht-Rock’s, which is collaborating with some national meteorological offices but not with the WMO, raises questions of who people should listen to in case of extreme weather. “Are we not supposed to listen to the National Weather Service in cities that are doing something different?” Ebi asked.

There’s also a risk that giving heat waves names could prove counterproductive in the face of every other climate disaster we’re bound to experience. We already name fires and hurricanes, Marlon pointed out, and giving names to every natural disaster could create a confusing jumble of names that risk being blown out of proportion by an attention-hungry media.

For the climatologists at Arsht-Rock, the best-case scenario is to avoid that problem by simply having organizations like the WMO adopt their system. The idea is that their pilot program would collect evidence about whether the names and categories do or do not work. More than anything else, said McLeod, they see the categories as a system of communication that will help people understand when they’re in danger and what kind of precautions they need to take.

“Institutions change slowly,” said McLeod. “We think that the conditions and the death tolls push us to accelerate what we’re doing to save lives as soon as we can.”

If their pilot shows naming heat waves isn’t very effective, the climatologists will drop that part of their plans. But if naming does prove to be effective and organizations like the WMO still decide not to adopt them, McLeod said, they’ll continue working with whatever governments do want to use the system — exactly what Ebi and the WMO are afraid of.

Whatever happens, it’s clear we need to change how we talk about heat waves. ”I think there’s lots of creative ways to start raising awareness,” Ebi said. “We have to try to get people to really understand those risks. Nobody needs to die in a heat wave.”