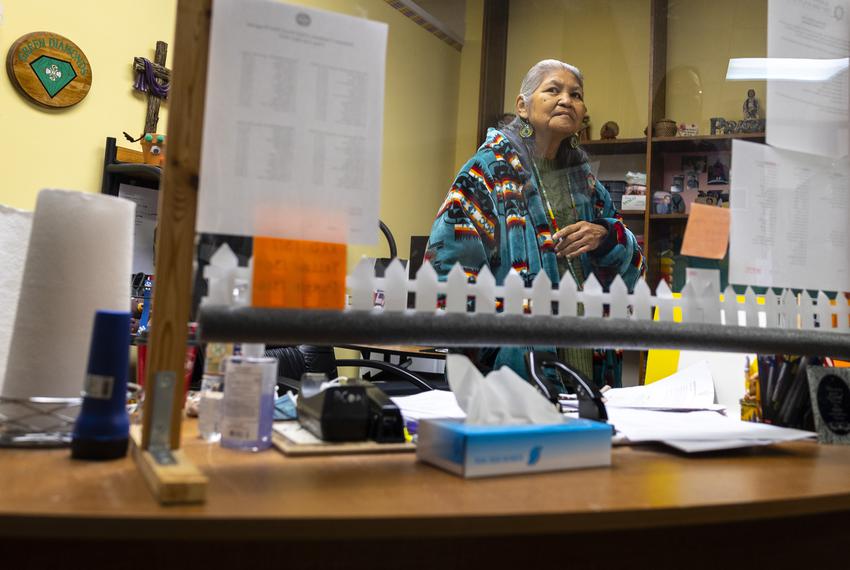 LIVINGSTON — When Millie Thompson Williams and her cousin Myra Battise were growing up, they’d play make-believe underneath a canopy of pine trees in the Big Thicket National Preserve, pretending to be tribal council members.

It was a true fantasy for the two girls growing up during the 1960s, when the seven-member governing body of their tribe was made up entirely of men.

“We’re going to say no to everything they say!” Williams would tell Battise, who laughed along and continued the charade.

Now, 60 years later, Williams recalls those memories fondly and realizes they are no longer the things of daydreams.

On New Year’s Day, Williams, 66, was inaugurated as second chief of the Alabama-Coushatta Tribe of Texas, becoming the first woman elected to the post in the tribe’s over-200-year history.

The second chief, along with the principal chief, acts as an ambassador of the tribe and provides cultural advice to the tribal council and key tribal committees. Williams’ ascension to power follows a string of family tragedies that left her widowed — but comes at an opportune moment for women of her tribe. Her leadership coincides with the first time that the tribal council is made up predominantly of women, not men.

“To me what this represents is not a step forward, but things coming full circle,” said Nita Battise, vice chair of the Alabama-Coushatta Tribal Council and a distant cousin of Williams. “We were a matriarchal society at one time. … Things always come full circle.”

Before facing encroachment from European settlers during the 18th century, both the Alabama and the Coushatta tribes operated as matrilineal and matriarchal societies, similar to other Indigenous tribes. Women were highly regarded as key decision-makers, and children inherited their clan membership through their mothers — a tradition that has continued. Still, the influx of Christianity and white European influences brought about a shift toward a more male-dominated system of government. It wasn’t until 1980 that the tribe had its first female council member.

Now, as Williams makes history and power shifts back toward women, she hopes to steer the tribe in a direction that balances economic prosperity with cultural traditions. As the oldest reservation in Texas and one of three federally recognized tribes in the state, the Alabama-Coushatta have long fought for sovereignty and respect from state and federal leaders. For years, politicians have — at best — ignored the tribe, and, at worst, have gone against their best interests. Finally, the tribe is in a place of economic growth. Last year, the tribe secured the legal right to operate an electronic gaming facility on their reservation. The operation, Naskila Gaming, has proven a boon to economic development, creating hundreds of jobs and generating millions of dollars in revenue.

Still, the tribe struggles. The tug-of-war battle for recognition from politicians continues, and the reservation faces the same challenges as other rural Texas communities — aging infrastructure, limited access to health care and low educational attainment. They are also experiencing a baby boom that threatens the tribe’s connection to its past. Of the roughly 1,400 tribe members, 39% are under the age of 18, more than 1.5 times the rate in the United States at large. With fewer elders around, tribal traditions, including the Alabama language, crafts and folklore, are at risk of disappearing. Williams is intent on preventing that.

“I want to be there for my tribe, especially the young people who are coming up,” said Williams, who has a slender frame, round face and soft features. “I want them to be proud of who they are and where they come from.”

A fight for sovereignty

Williams was born and raised on a 10,200-acre reservation situated 17 miles east of Livingston. The entrance to the reservation appears as a wooden billboard between rows of pine trees on the two-lane Highway 190. Beyond the sign sits a culture center that serves as a hub for tribal activity and the seat of tribal council meetings. Across the street at Naskila Gaming, the lights of slot machines blink on and off.

Williams is one of roughly 1,400 enrolled members of the Alabama-Coushatta tribe, about half of whom reside on the reservation. The heavily forested region sits in Deep East Texas. Her ancestors first migrated to the region from present-day Alabama during the late 18th century after facing pressure from European settlers.

Although recognized as two separate tribes, the Alabamas and Coushattas have been closely associated and share a similar history of displacement and an ongoing battle for state and federal recognition. After Texas won independence from Mexico in 1836, many tribes were expelled from the state, but the Alabama and Coushattas had maintained amicable relations with their neighbors. They had even assisted Texans in their fight for independence by caring for the troops of General Sam Houston as they retreated from the Mexican army. When Mirabeau Lamar became president of Texas, he authorized an act to purchase land for the tribes.

Since then, the tribe has had to fight for sovereignty.

In a 1918 report, the U.S. Department of the Interior investigated the status of the tribe and found that the tribe’s greatest needs were for more land and vocational education. Congress appropriated land to the tribe in 1928 and authorized the acceptance of title over the land, effectively establishing a government-to-government relationship with them. But in 1954, as part of a series of laws aimed at assimilating Native Americans to Western culture, Congress terminated its relationship with the tribe. The reservation became an unincorporated association subject to the same state laws as other private associations. During the following decades, the Alabama-Coushatta Tribal Council advocated for recognition, traveling to Washington, D.C., to speak before Congress and appealing to local leaders for support.

Finally, in 1987, President Ronald Reagan signed into law the Restoration Act. With this federal recognition, the Alabama-Coushatta gained the power to self-govern and to uphold their own laws within their reservation. They were no longer subject to certain state laws and became entitled to certain federal benefits, services and protections, including federal protection over their reservation. Last summer, the tribe won a critical U.S. Supreme Court case that reaffirmed their autonomy to regulate non-prohibited gaming on their lands. The ruling ended a battle with Texas Attorney General Ken Paxton over Naskila Gaming.

The facility has created over 700 jobs and is the second-largest employer in the county, according to the tribe. But further progress is hard to come by. Tribe leaders hope to see the passage of a federal bill that would put them under the Indian Gaming Regulation Act. That legislation would prevent the state from seeking to shut down Naskila Gaming and would allow them to operate casinos, a potential additional source of revenue for tribe members, about 20% of whom live below the poverty line, according to data from the U.S. Census Bureau. The bill has passed the U.S. House several times but has stalled in the Senate.

More fundamentally, the tribe is seeking respect from state leaders.

Amid personal heartbreak, a chance to make history

Williams was grappling with the COVID-19 pandemic and its impact on her reservation’s Head Start program, with which she had worked for 37 years, when her husband died of a heart condition. It was the first in a series of losses she’d face at the dawn of the new decade.

She felt as if half of her physical body was gone.

Amid her grief, Williams’ cousin Battise called her on the phone one day, saying she planned to nominate her for the position of second chief, a lifetime appointment.

Williams graciously accepted the nomination but decided not to campaign for the role.

A woman of faith, she’d instead leave the results up to God.

“If He wants me to be a second chief, then he’ll make a way,” Williams recalled thinking. “If He says no, then I’d understand.”

A few days after the election, Williams sat in the front row of her church, a modest brick building where Williams attends weekly services and teaches adult Sunday school classes in her tribal language.

From the pulpit, a community member shared the results of the election: Williams won by a slim margin. She was shocked.

“Who ever thought I would be chief?” Williams said. “I grew up in a single-parent household and was at the bottom of the totem pole all my life. I never thought I’d be here.”

As one of a dwindling number of tribal elders on the reservation, Williams wants to use her position to instill cultural traditions and values in young people.

She is most focused on teaching young people Alabama, a tribal language that has been passed down orally from generation to generation.

“It’s important that we know how to talk in Alabama because God gave us this language to talk,” Williams said. As second chief, she plans to regularly visit the youth center, a building where kids gather on the reservation for after-school and weekend activities. She’ll use her skills as an educator to teach language classes to young children. And she’ll recruit other tribal elders to teach what they know, including weaving baskets out of longleaf pine needles, cooking traditional foods such as fried bread and corn soup and making jewelry out of beads.

“I want them to want to learn,” Williams said. “I love my people, and I want us to survive.”

On the day of Williams’ inauguration, four empty chairs sat in the front row of the pavilion, where community members gathered for a sacred ceremony. Williams had requested the chairs so she could honor her deceased husband and children.

During the weeks before the inauguration, as committees of tribe members prepared for the big day, Williams had vivid dreams. In them, her deceased family members would visit her to offer words of encouragement. In one dream, Williams thought she was in heaven with her husband. But he told her that she still had work left to do on Earth. Williams found his presence reassuring.

“He said we’re going to be fine,” Williams recounted. “And you’ll come join us when you’re done.”

Tesla has the highest customer retention, and the industry…

Sobhita Dhulipala Looks Stunning at the promotions of The…

Wakanda Forever’ Star Admits She Wisely Sat Under the Angela…