Testing at BC Children’s Hospital limited to sickest kids 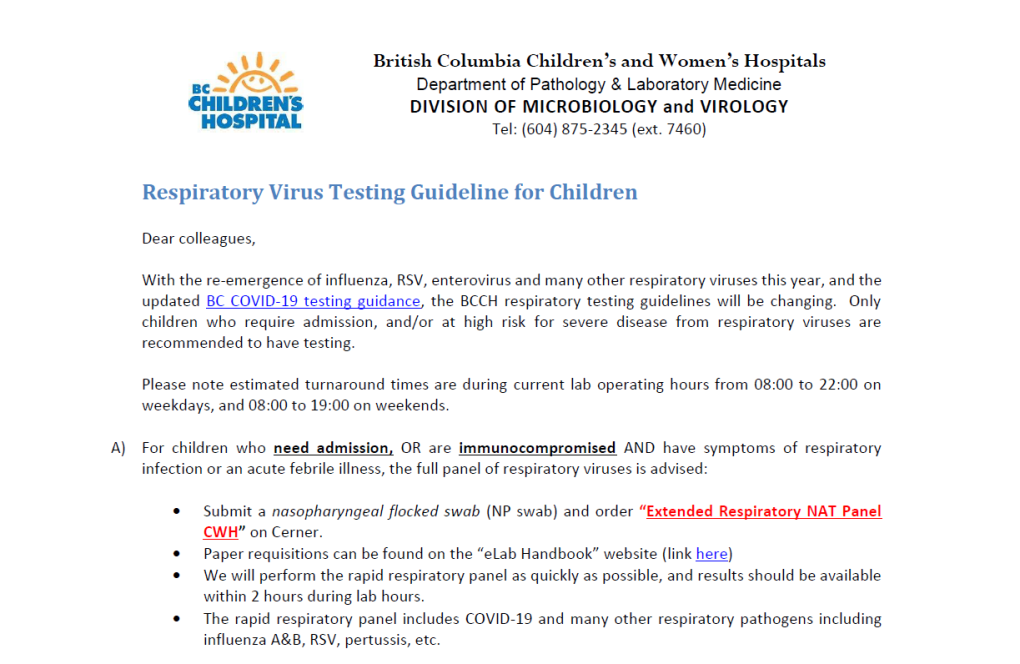 The large number of sick kids and the severity of their respiratory symptoms is prompting Canada’s medico-legal association to make a rare exception for doctors to undertake work outside their training to help treat children.

The urgency and dire circumstances described in a bulletin issued by the Canadian Medical Protective Association Friday appear to stand in contrast to frontline practices, however, with sources in the Lower Mainland telling CTV News very few sick kids are being tested to determine what respiratory virus or bacteria is sending them to hospital, prompting health-care workers to raise questions about how thoroughly B.C. policymakers understand the situation.

Only the sickest children are tested, typically upon admission for overnight stay, or if they’re at high-risk from viral infection.

On Friday morning, physicians around the country received a memo from the CMPA about the “Pediatric Care Crisis,” with the CEO writing: “Given the unprecedented overcrowding occurring in pediatric hospitals across the country, you may be asked to practise outside your usual scope.”

For example, emergency or ICU physicians not trained to care for children might have to do so, with pediatricians potentially asked to provide hospital-level care. The association, which provides legal advice and related services to doctors, assured them that “in exceptional circumstances such as these, you will be eligible for our assistance even if practising outside your scope.”

The last time such an exception was made for medical care outside a doctor’s scope was in March of 2020, when COVID-19 was new and very ill people required significant care in hospital.

The CMPA notification comes amid excessive waits for pediatric patients in B.C. hospitals, with children’s surgeries cancelled and significant waits for treatment. The surge in demand comes from a perfect storm of COVID-19, influenza and respiratory syncytial hitting kids all at once, but just how well the province understands the distribution and impact of each virus is now being questioned.

Multiple sources in the health-care system are frustrated that public health officials are confident about there respiratory viruses impacting children when, they say, little testing is being done to determine just how much is due to COVID, the flu or the common cold, for example.

CTV News has obtained an internal memo from BC Children’s Hospital in which administrators announced they were changed their testing guidelines so that only children admitted for overnight medical treatment or at high risk should be tested.

Part of a memo sent to BC Children’s Hospital workers on Oct. 31 detailing changes to testing procedures for respiratory illness in children.

“For children who need admission, OR are immunocompromised AND have symptoms of respiratory infection or an acute febrile illness, the full panel of respiratory viruses is advised,” reads the memo, dated Oct. 31.

“For children who do not need admission, but have risk factors for severe RSV, influenza, or COVID-19 (see Table 1), AND have acute respiratory symptoms or flu-like illness, targeted testing for these three specific viruses is advised to direct treatment.”

The children’s hospital is discouraging parents from taking children to hospital for non-emergency medical attention, but with the shortage of pediatric cold and flu medications, many feel they have no alternative, despite multi-hour waits with a feverish, coughing child.

On Wednesday, the Ministry of Health announced a panel that is now co-ordinating pediatric resources province-wide under the leadership of a committee at BC Children’s Hospital.

There are only 21 pediatric intensive care beds in British Columbia.