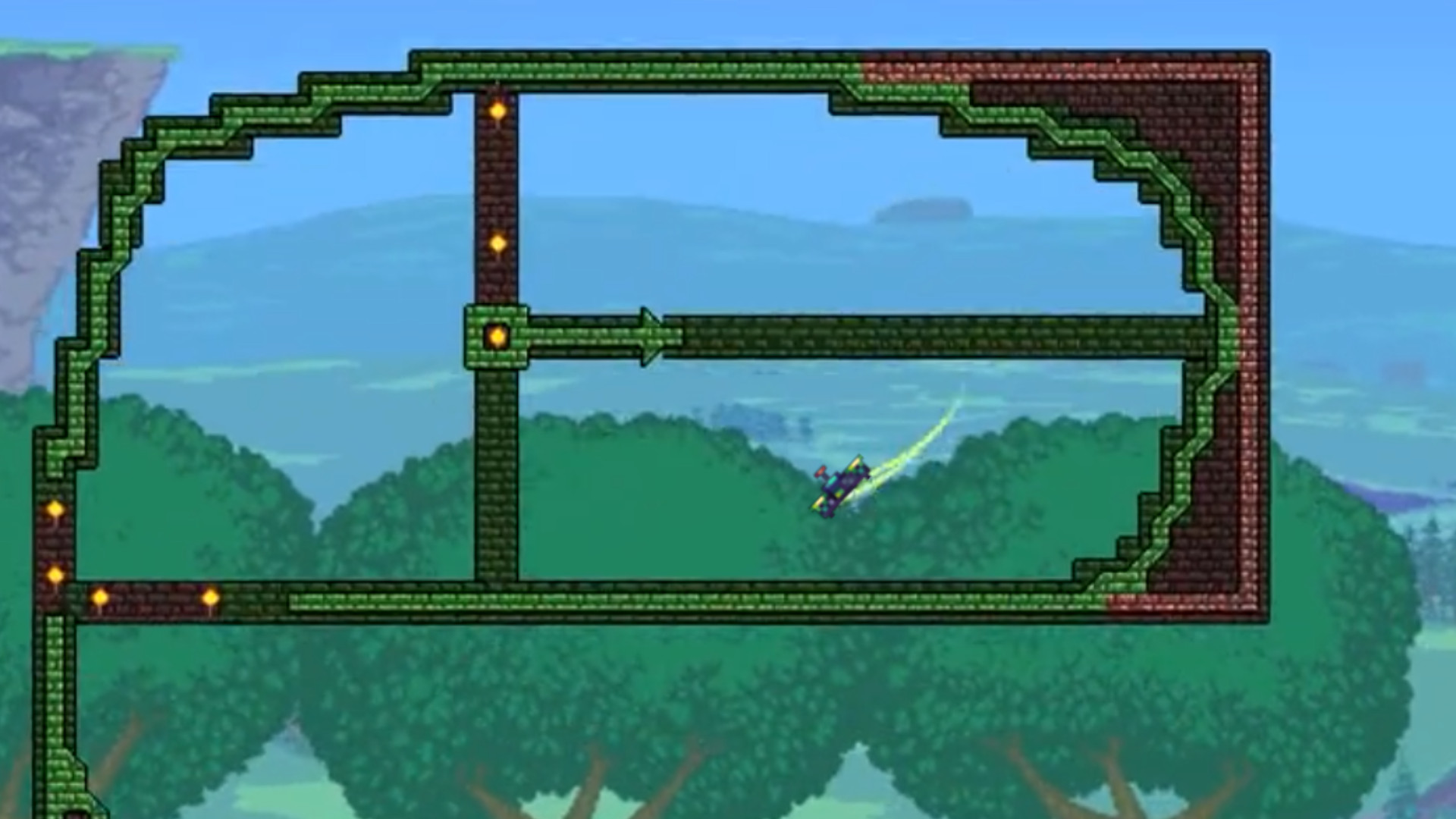 The Terraria 1.4.4 update Labor of Love is here, and one of the most fun new items introduced in the latest patch for one of the best crafting games is a fully pilotable drone. The Kwad Racer Drone is a fast, flighty thing that can really zoom around the map – if you can wrap your head around its sensitive controls. Of course, someone who’s had a bit more time to practise is Re-Logic artist Jim ‘Jaxrud’ Kjexrud, and he’s been showcasing his skills to fans.

The Kwad Racer Drone can be bought from the Cyborg for 10 gold after defeating Plantera – so you’ll have to work your way through quite a few Terraria bosses before you can get your hands on one. In addition, the Cyborg offers an accessory called the FPV Goggles for another 10 gold. Wearing these will let you see a ‘first-person view’ – essentially causing the camera to follow your drone while it is active, rather than fixing to your player character.

Despite its somewhat wide appearance, the drone can squeeze through one block wide gaps – meaning that plenty of Terraria adventure mode fans are already talking in hushed whispers about the potential for some creative maps using the drone to navigate through complex maze systems. YouTuber BlueJayT Gaming shows off a basic test design, which includes several pressure plates used to open gates in the maze. However, as a newcomer to the drone controls, it took him quite a few attempts to navigate around his creation.

Re-Logic’s Jaxrud, on the other hand, has been showing off what can be done by a more experienced user. In a video on his Twitter, Jaxrud dances around a mid-air course made of bricks, weaving in and out of small gaps and spinning through the air as he makes his way around the various obstacles. Responding to BlueJayT’s wonder at his fine control, Jaxrud notes that “It helps that I specified how it should work myself,” though he adds that “I’m sure I’ll see clips of people doing amazing stuff I could just dream of soon enough.”

We’re certainly excited to see people get to grips with the Kwad Racer Drone and see what incredible tricks they can pull off. Even if you aren’t the most competent pilot around, there’s still plenty of potential for creativity here – Jaxrud also says he hopes to see plenty of more fully-fledged racing and stunt courses built for the drone and published through the Workshop.

Just playing around
I’m hoping to see a lot of courses more proper built and published to the Workshop! 😀 pic.twitter.com/7YJcBADBym

If you’re after even more drone practice and you love free games, the current Epic Games Store freebies at the time of writing include Drone Racing League Sim for free. If you’d rather stick to Terraria for now, we’ve got the Terraria 1.4.4 patch notes for the latest update, which includes plenty of secrets including a magical new Terraria liquid. We’ve also got all the best Terraria mods so you can expand one of the best sandbox games on PC even further.