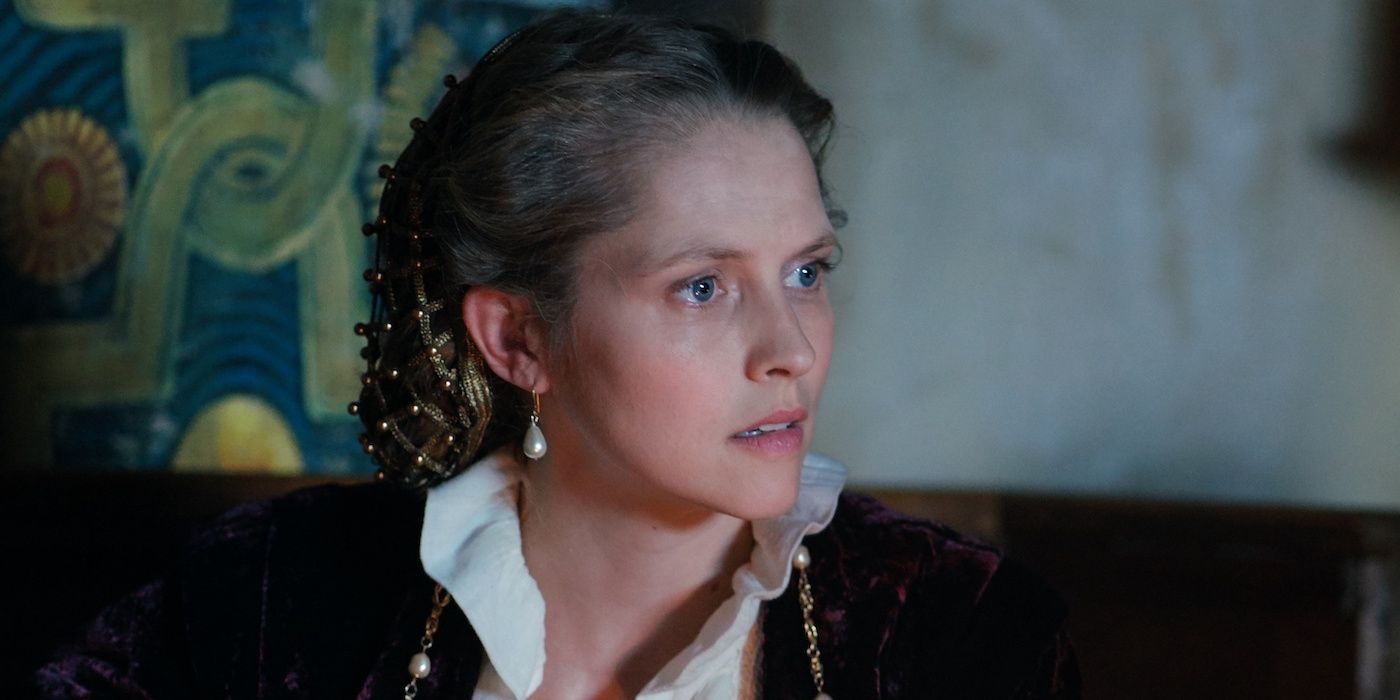 Adapted from Deborah Harkness’ All Souls trilogy, the 10-episode second season of A Discovery of Witches follows Matthew Clairmont (Matthew Goode) and Diana Bishop (Teresa Palmer) as they hide out in Elizabethan London, which has its own set of dangers and threats. While there, Diana must find a powerful witch teacher to help her control her magic and Matthew struggles to overcome his own demons, in the hopes of getting back to the present day.

During this 1-on-1 phone interview with Collider, Palmer talked about what she loves about her character, what she enjoys about working with Goode, the show’s incredible production design, how emotional it is for her to currently be shooting the end of Season 3 and the conclusion of Diana’s profound journey, and much more.

COLLIDER: You’ve talked before about having fallen in love with this character. What do you love most about her and what was the moment that made you realize what a great character she is?

TERESA PALMER: I love her humanity. I think she’s a really compassionate, open, brave woman. She’s also really layered with vulnerabilities and she’s just fierce. I love a colorful woman who could be all things. It’s really hard to put Diana in a box. She’s just such a dynamic individual. When I first read the scripts for Season 1, I had hints of that in her. I loved that she ran away from her true nature. I thought that was quite a human way to be, even though she’s not human. She absolutely is someone who struggles with her identity, in the first season, and I loved that. I felt like I could relate to that. And then, she goes on the immense journey of growth. It’s such a privilege to be able to bear witness to that, but also to be able to breathe life into that. It’s such a joy and a blessing for me. I feel very grateful that gets to be a part of my journey too because I feel really connected with her in so many ways.

PALMER: When I first signed on, it was a world that I didn’t know much about, but I hoped it would be enthralling and exciting, and it has been. For me, I’m always advocating for Diana and her journey. The books are so rich in character and nuanced, and Diana is the narrator of these books. You’re on this internal journey with her and you feel so close to her, but we couldn’t weave that into the TV adaptation. It hasn’t been straightforward to find her voice and what parts of the book we’ll weave together for this adaptation. That’s the hardest thing. You fall in love with so many aspects of the story, but then when you only have eight or 10 episodes to have that story unfold, you inevitably have to kill some of your darling, which is probably the most challenging for me.

Now that you’re shooting Season 3, how different does the Diana of Season 2 feel to what you’re doing now?

PALMER: Diana was on her journey, towards the end of Season 2, into being this fully realized, completely empowered, layered being. Where she is now, during the very last moments of Season 3, it’s emotional for me. Getting to witness the transformation and growth in her has been really moving. Because I’ve been with this character for so many years, and I can feel the passion and the connection that people have for Diana and her journey and her experience, I just feel even closer to her and I love her. I love seeing where she is. She takes many steps forward in Season 3. It’s just very rewarding, where we end with this story, and who she is at the end of this trilogy. Her journey is very profound.

What does it feel like to know that you’re getting so close to the end of this story? Does it change how you’re approaching things? Does it feel like you’re trying to be more present in every moment that you have left with her?

PALMER: Yeah. I’ve had some moments, just looking around. I was looking at Matthew’s face, Steven Cree, Ed Bluemel, and Aiysha Hart, and we were just having a laugh. We all went quiet for a moment and we realized, “We don’t know when we’ll get to see each other again. This is it.” We’re coming to the final days of this family, and then we’re breaking up. There’s this bittersweet feeling, to say goodbye to these people who have been such an important part of my life. So, I’m trying to be as present as possible, but I’m also looking to the future and excited about what this means for my family and getting to spend more time in Australia. Also, I think the audiences are gonna feel so wonderful with how everyone’s story comes to such an organic, beautiful conclusion. I think everyone will be really happy.

Now that you’ve had an experience like this, on a TV series where you’ve gotten to really live with a character for a while, is that something that you’d want to do again? Would you want to do another series where you get to play a character for a longer period of time, or do you think it would make you even more selective about it because you had an experience like this?

PALMER: One of my intentions is to find shorter pieces. Whether I go back into film and do things that take seven weeks to film or four months to film, I think that’s where I’m at. I don’t wanna let go of Diana so soon, to have to start a new relationship with a new character, over a long period of time. I’m not ready for it. I’ll be so bruised from my break-up that I won’t be ready to take that next step. When I find the right project, whether that’s a couple of years from now, I’m not sure, but I’m definitely open to having this experience again. I will say there’s something so liberating and wonderful, as a performer, to be able to marinate in a character and grow with them and find little pieces about them that you didn’t find in the beginning seasons. I love that. That’s just such a nice gift, as a performer. So, never say never, but right now, that’s not what I’m looking to do. A limited series would be great because that’s like seven episodes, and then you’re done.

You’ve talked about how much you enjoy working with Matthew Goode. What’s it like to work with him and to get to know him, as a scene partner? How does he most challenge you as an actor?

PALMER: He most challenges me, as an actor, when he gets the giggles, which happens all the time. If it’s the end of the day, and he’s been on the horses and he’s having a laugh and he gets the giggles, that’s it. I’m done. He makes me laugh so much. When I can just see the corners of his mouth start to go up, I’m like, “All right, guys, we have to cut. I need to have a moment to compose myself.”

One of the directors on Season 2 cut together all of the footage of Matthew and me, bursting out laughing in the middle of scenes. There were so many of those situations, but it makes it so fun and light-hearted. He also makes me dig deeper because he is the most brilliant actor. Everything he does, everything he touches in this show, is gold. He’s just so wonderful. The funny thing about Matthew is that it comes so easily to him. He’s not someone that has to work really hard at it. Of course, he works hard, but he’s just so gifted. He’s so talented. He switches into his character and he’s just a remarkable performer. I’m always in awe of that. I’m always trying to dig deep and I find it really challenging sometimes. A scene might be hard, but he just always shines.

This season, the production design, the location, the sets, and the costumes are all so incredibly detailed and really transport viewers to the time period, but I’m sure there’s even more detail that we can’t see from watching it on TV. What would most surprise fans about that aspect of Season 2? What can’t we see that really helped transport you while you were on set?

PALMER: Well, the smells. The backlot was built on someone’s farm and it’s huge. I don’t think audiences will be able to see how massive the sets are, but around every corner, there was some little historical artifact that was so interesting and detailed and delicate. James North, who’s the production designer, cared so much about every tiny little piece of detail. There was so much attention and thought put into it, and as the audience, you can’t pick that up on the camera. He feels like, if he can transport the actors, then he’s done his job. Even when it’s not on camera, if it sets the scene, he’s done his job. And that backlot where we shot in Wales was breathtaking. We walked on set and there were these smells that smelled like bread was baking and I was in my grandma’s kitchen. I didn’t have to imagine it because it smelled amazing. It was just such an incredible experience. I have never, in my career, seen a set like that and been so transfixed when I’ve walked onto the set in my costume. I’ve never felt like that before.

Some of the costumes that you wear in Season 2 are just incredible. What was it like to actually wear those? How challenging are they to move around and actually be able to breathe in?

PALMER: Sarah Arthur, our costume director, was just brilliant. Deb [Harkness] would bring her images and say, “I really picture this dress looking like this,” and Sarah would find the material and her brilliant team would work for 12 hours a day on these amazing dresses. And to wear them, I felt like the luckiest woman alive. Every time I descended the stairs of my trailer in one of those massive gowns, I couldn’t believe that this is my job and this is what I get to do for a living, to be dressed up in this way, with my hair done and beads threaded through it. Of course, it always grounds me when I have my seven-month-old daughter ripping at my dresses and trying to breastfeed. Luckily, I had a corset under each of my dresses that would pop open at the front, so I could quickly rip it off and get them out and make my daughter happy. It was such a dream.

A Discovery of Witches Season 2 available to stream at Sundance Now and Shudder.

Christina Radish is a Senior Reporter at Collider. Having worked at Collider for over a decade (since 2009), her primary focus is on film and television interviews with talent both in front of and behind the camera. She is a theme park fanatic, which has lead to covering various land and ride openings, and a huge music fan, for which she judges life by the time before Pearl Jam and the time after. She is also a member of the Critics Choice Association and the Television Critics Association.

View: Let Pujara be. Judge a batsman by his average rather than strike rate in Test cricket