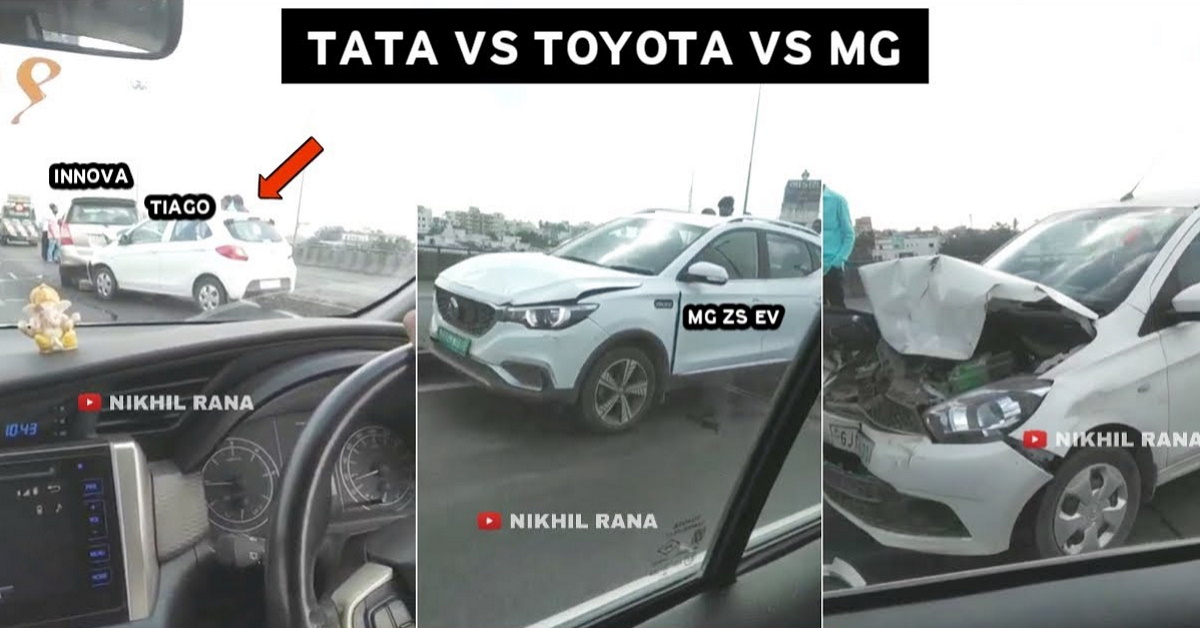 Road accidents are quite common in India and there are thousands of accidents that go unreported daily. Here is an accident between three cars – Tata Tiago, MG ZS EV and Toyota Innova on the expressway that shows the build quality of the cars and also shows the importance of maintaining distance between the vehicles while driving.

The video by Nikhil Rana shows an accident on the Mumbai-Pune expressway between three cars. According to the information, it was a pile-up accident. The MG ZS EV, which was at the front applied the brakes suddenly, which caused the Toyota Innova driver to crash into the ZS EV. A Tata Tiago hatchback, which was behind the Innova could not stop in time and crashed into the Innova.

Such pile-up accidents are not uncommon but they can be extremely dangerous as the cars can be sandwiched between much bigger vehicles like trucks or buses. This pile-up accident shows the real importance of maintaining distance between two vehicles, especially while travelling on high-speed roads like expressways.

How to maintain a safe distance on highways?

Maintaining a safe distance on the roads, especially on high-speed corridors like highways and expressways is essential to safety. In India, most motorists do not maintain distance from the car ahead, which can lead to such accidents. This is not the first such accident. We have seen many such accidents on the roads.

The video explains how heavier vehicle stops slower than regular vehicles on the roads. The heavier vehicles require extra distance to slow down and stop when compared to the regular vehicles. The 3-second rule is the thumb rule that every car and motorcycle rider should follow on the roads. How to follow the 3-second rule? Well, one needs to take a fixed object like a lamppost, tree or signboards on the roads and count the seconds after the vehicle in front of your crosses it. When your vehicle crosses the same object, it should be 3 seconds.

Following this rule ensures that your vehicle remains at a safe distance from the vehicle ahead and in case of an emergency braking, your vehicle gets enough road to stop in time. Heavier vehicles like SUVs need to follow the 5-second distance rule to remain at a safe distance. As SUVs take a longer time to slow down because of the heavy momentum, a longer distance is required.

Emergency braking on the highways can be tricky. One also needs to check in the rearview mirrors to ensure that there is no heavy vehicle like a truck or a bus following your vehicle before you apply the brakes with full force.

Also read: Oppo to launch electric vehicle in India by 2024

‘The Batman’ Fan Feels the Collective Wrath of MCU Fandom…