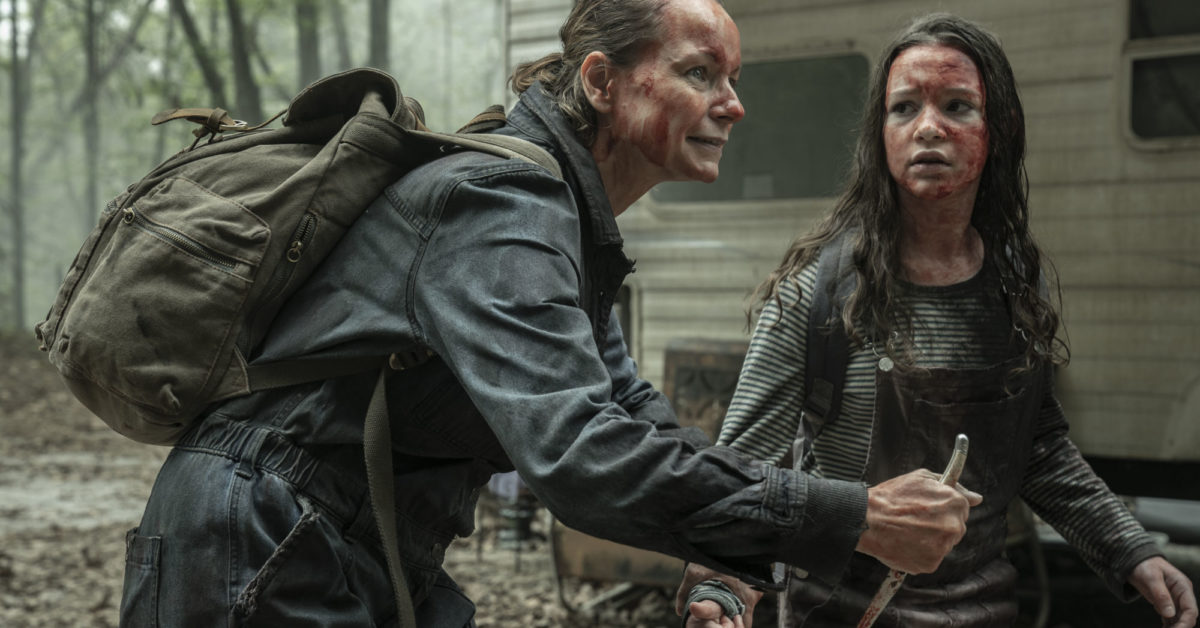 Two episodes in, and AMC’s horror anthology spinoff Tales of the Walking Dead has been living up to its promise of offering some distinctly different takes on the TWD universe (check out our thoughts on last week’s episode here). But this week’s chapter lands us squarely into the middle of Alpha’s (Samantha Morton) pre-Whisperers backstory, with S01E03 “Dee” (directed by Michael E. Satrazemis and written by Channing Powell) the best chapter yet. Believing they may have found a brief reprieve from the violence of their new lives on a vintage steamboat, Dee/Alpha (Morton) and Lydia (Scarlett Blum) deal with a deteriorating situation when an attempted coup forces Dee back to her violent ways to save both of their lives. So with that in mind, we’re throwing on the “MAJOR SPOILERS AHEAD!” sign and dropping an image spoiler buffer before doing a deep dive into this week’s story.

Before we begin, it should be noted for the record that I would watch & listen to Samantha Morton read a menu from The Cheesecake Factory, so this episode already has a lot going for it…

Our introduction to Lauren Glazier‘s Brooke aboard the boat during the opening minutes just oozes with serious Southern Gothic vibes.

“Would you be more comfortable in a suit?”- Brooke to Dee… an interesting question/”joke” made even more interesting by Dee’s reaction to it.

Lydia has taken to Brooke, and it’s interesting how Dee seems okay with it. The opening line is making much more sense now because there’s still some “Dee” here (but you can vibe the “Alpha” aspect continuing to grow).

The asshole bartender scene is an interesting one in that we see what Dee’s willing to do for her daughter yet never feels deserving (or “good enough”) to be with her.

Brooke represents the hope that existed at this point that somehow society can be maintained and rebuilt even in the midst of the walker outbreak. A very naive one, as we’ve come to painfully learn. And yet Dee still wants the best for Lydia to the point where she sees others as having a better future for her.

“I was made when I killed Daddy. Daddy deserved it”- the last lines from Dee before the credits, after sending a message to Brooke that her “safe society” isn’t as safe as she thinks it is.

Listening to Dee/Alpha (not sure who’s speaking) narrating the backstory we know while we see images of the fantasyland aboard the boat was wonderfully constructed and served as a nice dread-builder. It’s not that there weren’t smart aspects to it, but it was too focused on maintaining the status quo and less on survival in a new world.

Ouch! Lydia just told Dee that she can go… but she wouldn’t go with her. Dee believes Lydia wouldn’t survive without her, but Lydia counters that Dee doesn’t think she will survive either way. Damn, dropping “Brooke” hit Dee hard…

So now we’re seeing the road to Alpha… even as Dee tries to do the right thing by Brooke, she’s never going to get the benefit of the doubt. Partly her problem, partly how she’s stereotyped by those who feel above her.

Yeah, not a good move trying to challenge Dee when it comes to Lydia… as Lydia makes Brooke well-aware…

Looks like Billy the Bartender is “Negan, Jr.” as he’s looking to thin out the “undeserving” so his men have room on the boat. As Billy sees it, he’s the “hammer” that Brooke needs for her plan to work. And then Dee goes “Rambo” on the guard holding Brooke and all Hell breaks loose. And let me tell you, Dee is definitely a survivalist… especially with that rope dive into the water.

Dee did “The Empire Strikes Back” move, except splitting open a walker and hiding underneath it until the walkers left. From there, Dee continues to promise Lydia that she will do whatever it takes to keep her alive. And tragically, what’s going on around them only helps to prove her point to Lydia. Because things on the boat went south fast…

As much as may think she’s doing it for Lydia, Dee leaving Brooke alive but carving a “reminder mark” across her face because Brooke “failed her daughter” was strictly about getting payback for Brooke insulting her as a mother.

Making their way to the Sunny Creek RV park, we see the two scavenge for food and supplies. And it’s there that Dee wants to begin “training” Lydia, but it does not go well. And a side note? Dee killing the walkers by stabbing them in their heads through the tent had a very Inglourious Basterds vibe to it.

In their darkest hour, when Dee was ready to kill both Lydia and herself (or so she claims), we witness the beginning of the Whisperers and how alpha came to be… and a disturbing end scene showing us how she was able to take over as leader.

And with that, we have an impressive prequel-back story on how Alpha came to be while offering additional layers to the already complex Alpha/Lydia dynamic. Through all of it, what stood out the most was just how different things could’ve been between Brooke, Dee & Lydia. we even see a moment or two where you could imagine them working together. And for Lydia, the influence of both women is what would keep her alive the most. But motherhood is one area Dee will never share… or compromise. 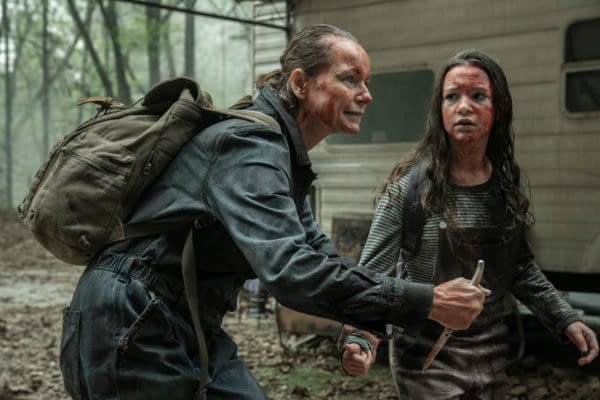 Two episodes into an already impressive season, AMC’s horror anthology spinoff Tales of the Walking Dead has lived up to its promise of offering some distinctly different takes on the TWD universe. But this week’s chapter lands us squarely into the middle of Alpha’s (Samantha Morton) pre-Whisperers backstory, with S01E03 “Dee” (directed by Michael E. Satrazemis and written by Channing Powell) the best chapter yet. Believing they may have found a brief reprieve from the violence of their new lives on a vintage steamboat, Dee/Alpha (Morton) and Lydia (Scarlett Blum) deal with a deteriorating situation when an attempted coup forces Dee back to her violent ways to save both of their lives.