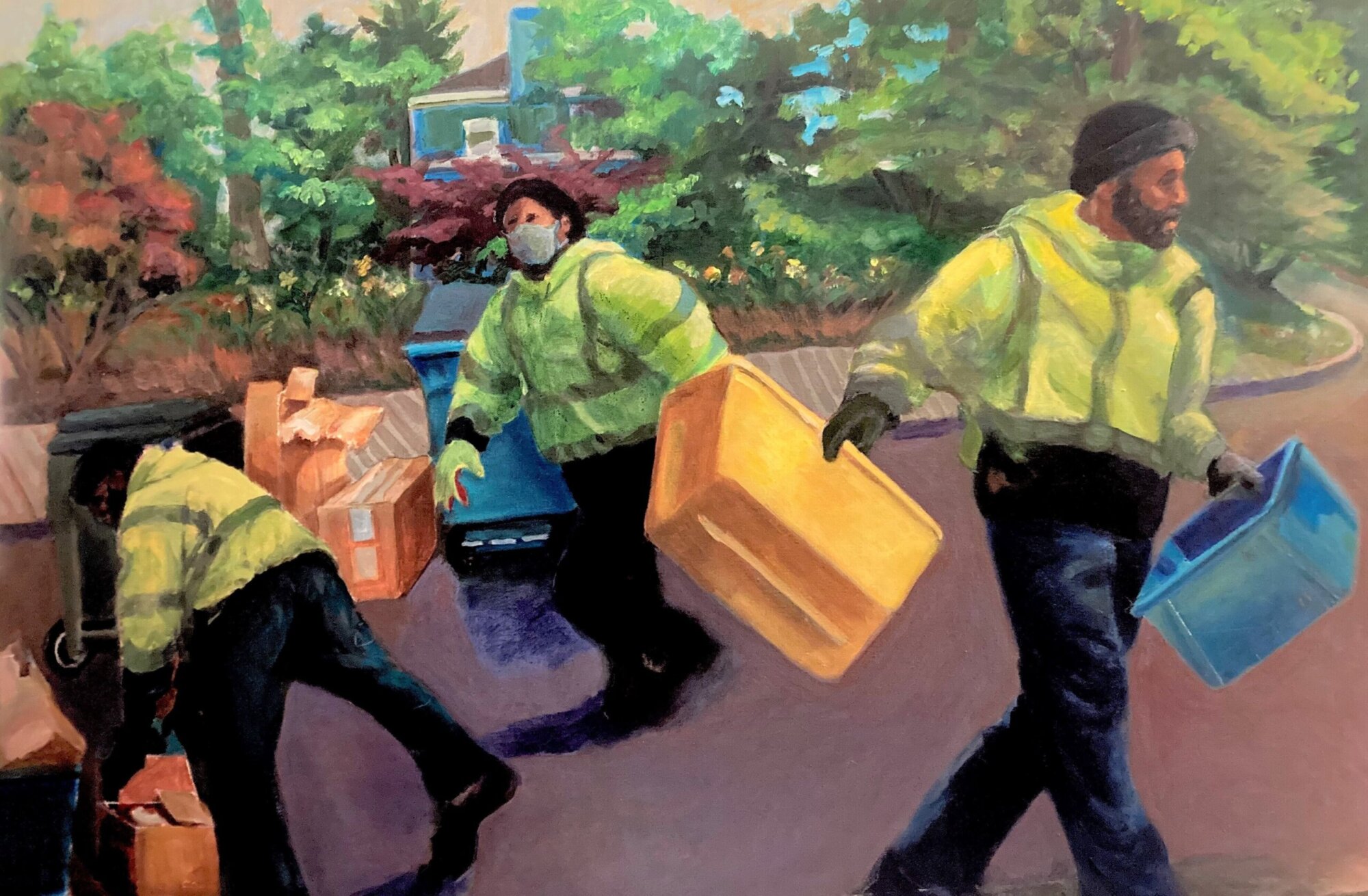 It was a chance look out the window at the fast-paced rhythm of sanitation workers one early morning that led a Takoma Park, Maryland, artist to create her latest work, “Unsung Heroes.”

It was a chance look out the window at the fast-paced rhythm of sanitation workers one early morning that led a Takoma Park, Maryland, artist to create her latest work, “Unsung Heroes.”

Renee Lachman said she was struck by the drive of sanitation workers sprinting from their trucks to pick up trash and recycling — it reminded her of Olympic athletes, she told WTOP in an interview.

“The strength that they had to have, and the endurance” impressed her, she said. Lachman then thought of other public employees, such as librarians and crossing guards, and decided to create a body of work to spotlight their contributions to the community.

It was especially important to Lachman to profile the workers she saw in her neighborhood, she said.

“At the time, COVID was raging and we saw a number of stories about policemen, and firemen and nurses and doctors,” she said. But sanitation and other service workers in her community also played a critical role during a challenging time, she thought: “They provide these services and we just don’t acknowledge them enough.”

Lachman got the green light from Takoma Park officials to follow various workers throughout their shifts, snapping the photographs she would work from.

Lachman spent one morning with a local librarian responsible for shelving books and preparing the library for opening.

“Let me tell you, Takoma Park Library is a popular library,” Lachman said.

She recalled bringing her own daughter to the library, and as they entered the children’s section, she thought about how she would paint the scene: “She’s shelving, but some of the books are starting to come alive.”

Brendan Smith, the arts and humanities coordinator for the City of Takoma Park, mentioned a few of his favorites among the show’s pieces, including a charcoal drawing of crossing guard Harriet Saxton.

A familiar fixture in the community, Saxton works at the intersection near the elementary school.

“She’s always just friendly and smiling and giving kids hugs and stuff,” Smith said. “It’s just a great portrait of her in her crossing guard jacket. She’s holding a whistle — which she blows a lot.”

The exhibition is open through Sept. 30 at the Takoma Park Community Center.

Best graphics cards you can buy on Amazon India