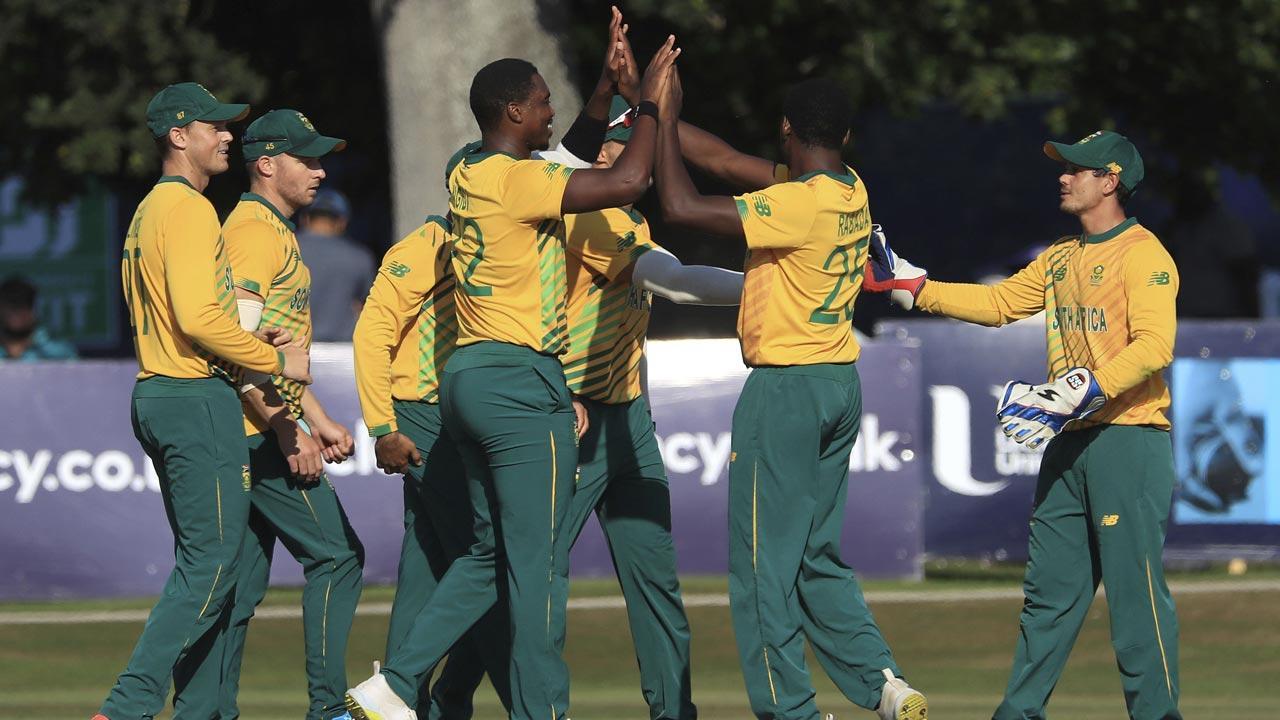 Tabraiz Shamsi produced a performance worthy of his number one ranking in the T20I rankings, when he took four wickets for 27 runs to help South Africa to a 33-run victory over Ireland in the first T20I here at Malahide on Monday.

The visitors have now gone 1-0 up in the three-match series. The hosts had no answers for Shamsi and George Linde`s (2/26) spinning charms as the pair claimed six wickets between them on the road to victory.

Lungi Ngidi returned to action after being rested from the last two ODIs and showed the value of downtime with his impressive return of 2/18 in his allotted overs. Kagiso Rabada (1/28) chipped in with a wicket and his intimidating presence as the Proteas reduced the home side to 132/9 in the end, chasing 166 for victory.

Ireland`s scorecard featured only four scores in double figures – 36 from Harry Tector, 30* by Barry McCarthy, 22 from the captain, Andrew Balbirnie and 15* from Josh Little. The latter`s 44-run, final-wicket partnership with McCarthy was the team`s batting highlight after the rest of the batsmen failed to either kick on or make a decent start.

Earlier in the match, South Africa was restricted to 165/7 at the end of their 20 overs after being asked to bat first by Balbirnie. Quinton de Kock and Temba Bavuma got off to a fiery start, the former smashing 20 runs off just nine deliveries before finding himself caught at mid-off by Paul Stirling off Mark Adair in the third over.

The visitors did a better job of trying to build partnerships even though they would be the first to admit that they should have put more runs on the board than they did. Aiden Markram top-scored with 39 off 30 deliveries after the loss of Bavuma and Janneman Malan for 13 and four respectively.

David Miller and Rassie van der Dussen added 28 and 25 each, but the real fireworks came courtesy of Kagiso Rabada in the end. He blasted four boundaries in a row to end the innings unbeaten on 19 off just nine balls.

Ireland`s Adair was the leading wicket-taker with 3/39, while Simi Singh (2/19) and Josh Little (2/27) chipped in with two each. The second match will be played on Thursday, 22 July in Belfast.

Denial of responsibility! My droll is an automatic aggregator of the all world’s media. In each content, the hyperlink to the primary source is specified. All trademarks belong to their rightful owners, all materials to their authors. If you are the owner of the content and do not want us to publish your materials, please contact us by email – [email protected]. The content will be deleted within 24 hours.
cricket newsirelandLungi NgidiSouth Africasports newstabraiz shamsi
0
Share

Warframe is coming to mobile, complete with cross-platform play

Golf POLL: Will Europe or USA win the Ryder Cup? Which player will score the most…