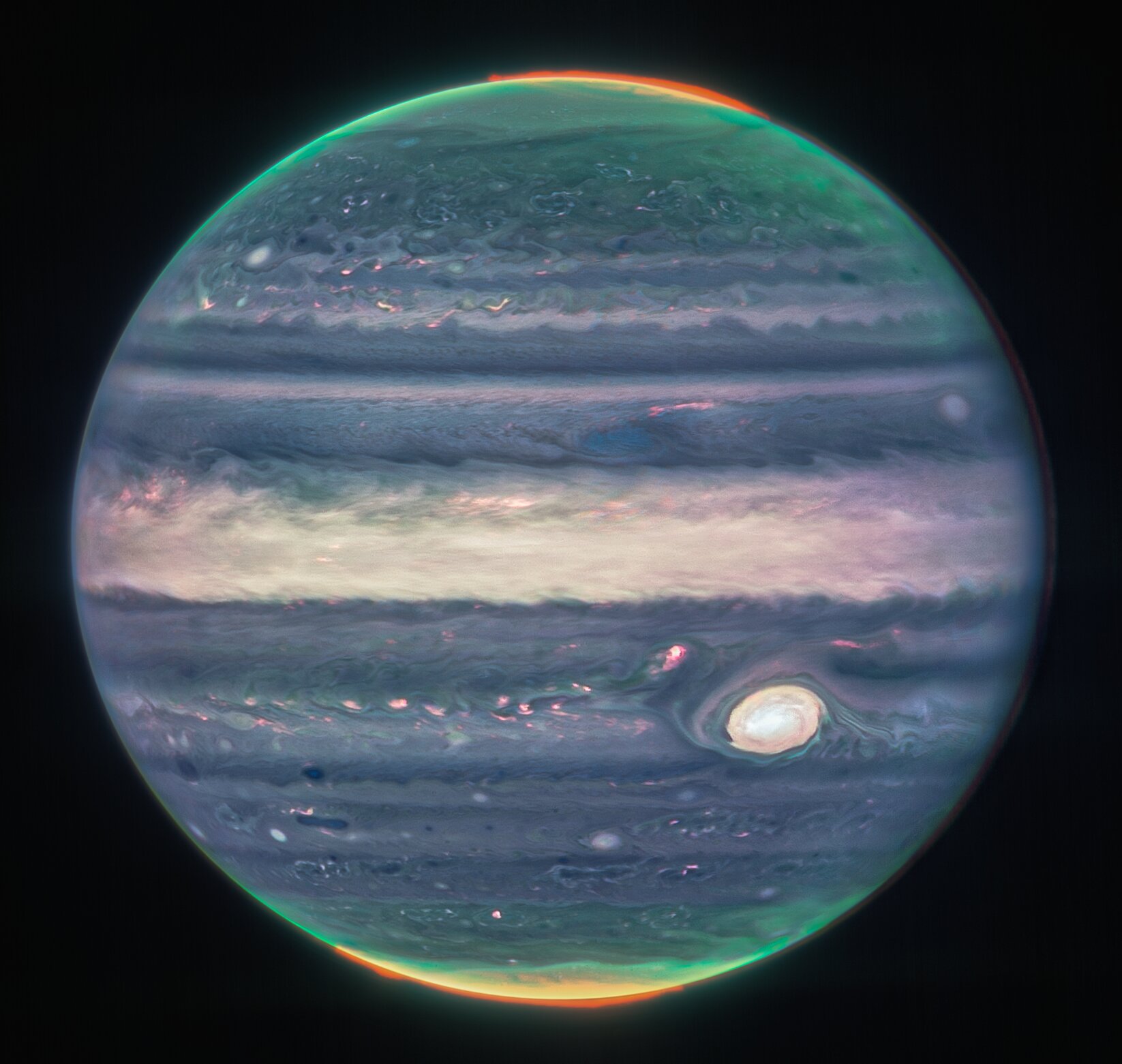 The latest images of Jupiter from the James Webb Space Telescope (JWST) are stunners.

Captured on July 27, the infrared images—artificially colored to make specific features stand out—show fine filigree along the edges of the colored bands and around the Great Red Spot and also provide an unprecedented view of the auroras over the north and south poles.

One wide-field image presents a unique lineup of the planet, its faint rings and two of Jupiter’s smaller satellites—Amalthea and Adrastea—against a background of galaxies.

“We’ve never seen Jupiter like this. It’s all quite incredible,” said planetary astronomer Imke de Pater, professor emerita of the University of California, Berkeley, who led the scientific observations of the planet with Thierry Fouchet, a professor at the Paris Observatory. “We hadn’t really expected it to be this good, to be honest. It’s really remarkable that we can see details on Jupiter together with its rings, tiny satellites and even galaxies in one image.”

De Pater, Fouchet and their team released the images today (Aug. 22) as part of the telescope’s Early Release Science program.

In addition to the enormous storm referred to as the Great Red Spot, numerous storm systems—seen as small pallid ovals —are also visible, as are tiny bright plumes of cloud particles. The transition between organized zonal flows and the chaotic vortex patterns at higher latitudes is also clearly visible.

“Although we have seen many of these features on Jupiter before, JWST’s infrared wavelengths give us a new perspective,” said de Pater. “JWST’s combination of images and spectra at near- and mid-infrared wavelengths will allow us to study the interplay of dynamics, chemistry and temperature structure in and above the Great Red Spot and the auroral regions.”

JWST’s Near Infrared Camera (NIRCam) also captured a wide-field view of Jupiter revealing its rings and two of its moons.

“This image illustrates the sensitivity and dynamic range of JWST’s NIRCam instrument,” Fouchet said. “It reveals the bright waves, swirls and vortices in Jupiter’s atmosphere and simultaneously captures the dark ring system, 1 million times fainter than the planet, as well as the moons Amalthea and Adrastea, which are roughly 200 and 20 kilometers across, respectively. This one image sums up the science of our Jupiter system program, which studies the dynamics and chemistry of Jupiter itself, its rings and its satellite system.”

The JWST images were processed with the help of citizen scientist Judy Schmidt of Modesto, California, who has worked with Hubble Space Telescope and other telescope images for the past 10 years, and Ricardo Hueso, who studies planetary atmospheres at the University of the Basque Country in Spain. Hueso is one of several coinvestigators on the Early Release Science (ERS) program, and is leading the NIRCam observations of Jupiter’s atmosphere.

“Something about it just stuck with me, and I can’t stop. I could spend hours and hours every day,” she said. Her goal, she added, is to “… try to get it to look natural, even if it’s not anything close to what your eye can see.”

Spectroscopic observations of Jupiter’s auroras are scheduled for later this year, while detailed spectroscopic observations of Jupiter’s Great Red Spot were taken on July 27 in the near-infrared and August 14-15 at mid-infrared wavelengths. The Great Red Spot observations are a joint project between the Early Release Science (ERS) team—with de Pater and Fouchet as co-principal investigators—and a program of Solar System observations developed by Heidi Hammel of the Association of Universities for Research in Astronomy (AURA), with the Jupiter observations led by Leigh Fletcher, a professor at the University of Leicester in England.

Provided by
University of California – Berkeley

What Is an APU (Accelerated Processing Unit)?

Fashion District stabbing: 2 teens in custody for killing of…

Dylan Edwards and Nicho Hynes left on standby list for…