Suppression of melatonin by blue light 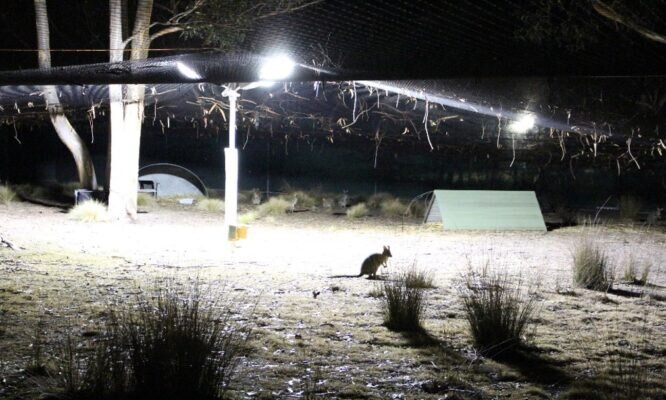 You may have heard that exposure to blue light can disrupt your sleep. As it turns, out it’s also harmful to wildlife.

In one enclosure, they were exposed to light-emitting diodes (aka LEDs). A second enclosure had blue-shielded LEDs much like the “night mode” setting on your phone or laptop. Wallabies in a third enclosure experienced natural darkness.

After 10 weeks, Alicia took blood samples to test the wallabies’ melatonin levels. As it turns out, LEDs have a dark side.

The ‘hormone of darkness’

Like us, wallabies rely on the hormone melatonin for a good night’s rest. And the level of melatonin produced in our bodies is regulated by a light-sensitive protein in our eyes called melanopsin. When certain wavelengths of light hit the melanopsin, it suppresses our melatonin production. Reduced levels of melatonin in our blood could mess with our bodies’ natural sleep-wake cycle.

“Melatonin is known as the ‘hormone of darkness,'” says Alicia.

“This is because production of melatonin is suppressed by light, and peak production occurs during the dark phase.”

Melatonin is also important for the immune system. In mammals, melatonin acts as an antioxidant, capturing free radicals.

Not all light equally activates melanopsin. Blue light with a wavelength between 420–440 nanometers is better at activating melanopsin.

In 2009, the Australian Government began to phase out incandescent globes for energy-efficient alternatives like LEDs.

Since then, LEDs have become the primary source of light for Australian homes, businesses and streetlights. Unfortunately, the energy-efficient light bulbs are causing health problems for nocturnal wildlife.

After 10 weeks of exposure to night-time LEDs, Alicia’s wallabies had lower melatonin levels.

“White LEDs cause problems because they contain a large amount of blue light, so they are really effective at suppressing melatonin,” says Alicia.

Beyond melatonin, for wallabies, the changing level of light throughout the four seasons is a timer for vital processes like reproduction.

“Animals that breed at a certain time of year, such as the tammar wallabies, rely on this biological clock to ensure that births occur when there is enough food to raise their young,” says Alicia.

“Many Australian mammals have been shown to reduce their activity even under a full moon due to an increased predation risk. So even very low levels of light pollution can disrupt our wildlife.”

The WA Department of Biodiversity, Conservation and Attractions has guidelines for businesses to reduce light pollution. However, they’re not legislated or enforced. Compliance with the guidelines is completely voluntary.

“The DBCA promotes the guidelines through education with industry and government agencies to ensure best-practice lighting design and reduce the potential impact of artificial light on wildlife,” says a DBCA spokesperson.

So if you wallaby the best friend you can to nocturnal wildlife near your home, consider getting blue-wavelength filters for your LEDs and placing them closer to the ground. They’ll love ‘roo for it!

Light pollution can suppress melatonin production in humans and animals

This article first appeared on Particle, a science news website based at Scitech, Perth, Australia. Read the original article.

Citation:
The dark side of LEDs: Suppression of melatonin by blue light (2022, September 9)
retrieved 9 September 2022
from https://phys.org/news/2022-09-dark-side-suppression-melatonin-blue.html