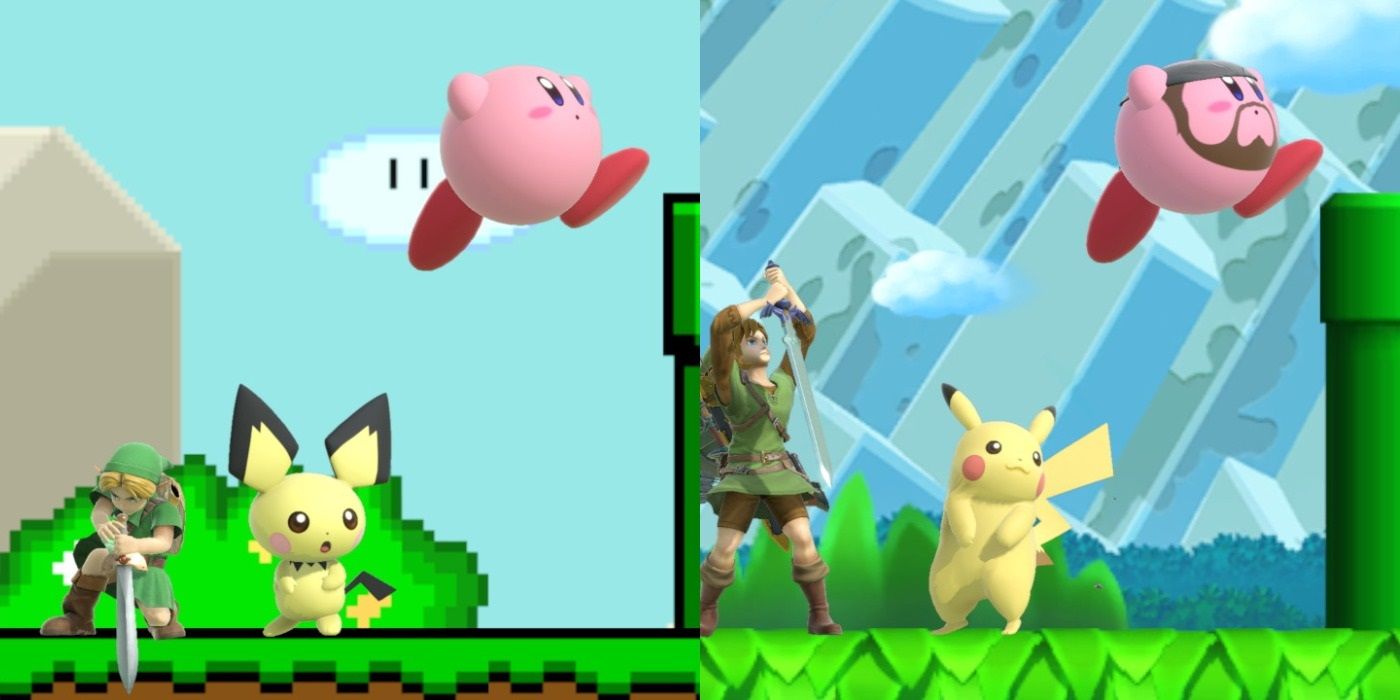 A couple of the fighters in Super Smash Bros. Ultimate include younger/older versions alternate versions or costumes. Super Smash Bros. Ultimate features Cloud from Final Fantasy 7, and a costume based on his appearance in Advent Children, which is a sequel move set a few years after the original game. The only difference between these versions was the costume, until Cloud gained a new Final Smash for the Advent Children outfit when Sephiroth was added to the game.

The SmashBrosJP Twitter page has uploaded some new screenshots to celebrate Coming of Age Day in Japan, despite Masahiro Sakurai saying that he was slowing down on the Twitter posts. The first image shows Ike from Fire Emblem: Path of Radiance, Pichu, Young Link from The Legend of Zelda: Ocarina of Time/Majora’s Mask, and Kirby. They’re all hanging out on a level based on Super Mario World from the Super Mario Maker stage. The second image shows the older version of Ike from Fire Emblem: Radiant Dawn, Pikachu, Link from The Legend of Zelda: Breath of the Wild, and Kirby with facial hair, as he has just swallowed the returning Solid Snake. They’re hanging out on a stage based on New Super Mario Bros. U, representing the passage of time.

In Japan, Coming of Age Day is an event that is held on the second Monday of January. It encompasses a number of different ceremonies for people who have turned 2o, as it marks their passage into adulthood. Many of these celebrations still happened this year, but they had to follow specific health and safety protocols, due to COVID-19.

The images are meant to show the characters passing into adulthood. Radiant Dawn is set several years after Path of Radiance, with Ike turning 20 in the sequel. It has long been theorized that the Pichu from Super Smash Bros. Melee later evolved into the Pikachu from Super Smash Bros. Brawl. The versions of Link from the N64 games and Breath of the Wild aren’t connected, but the older version is wearing the Hylian Tunic as a reference to Ocarina of Time. Kirby sporting Snake’s facial hair, however, is just a silly joke. The Super Smash Bros. series has already had its Coming of Age Day, as it celebrated its 22nd anniversary this year. Fans will likely still be organizing Super Smash Bros. Melee tournaments well into the 2040s, assuming they can still find enough old TVs for setups.

Scott has been writing for Screen Rant since 2016 and regularly contributes to The Gamer. He has previously written articles and video scripts for websites like Cracked, Dorkly, Topless Robot, and TopTenz.
A graduate of Edge Hill University in the UK, Scott started out as a film student before moving into journalism. It turned out that wasting a childhood playing video games, reading comic books, and watching movies could be used for finding employment, regardless of what any career advisor might tell you. Scott specializes in gaming and has loved the medium since the early ‘90s when his first console was a ZX Spectrum that used to take 40 minutes to load a game from a tape cassette player to a black and white TV set. Scott now writes game reviews for Screen Rant and The Gamer, as well as news reports, opinion pieces, and game guides. He can be contacted on LinkedIn.