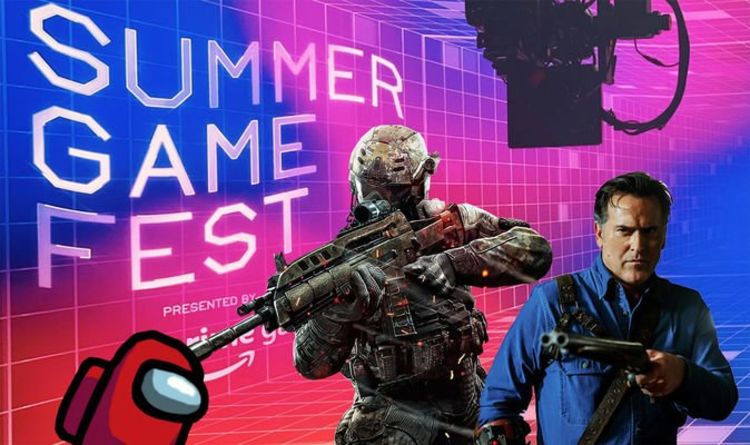 UPDATE 2: Elden Ring has finally been re-revealed at the Summer Game Fest event.

The spectacular Elden Ring trailer culminated with confirmation of a January 2022 release date.

Elden Ring will be available on PS5, PS4, Xbox Series X, Xbox One, and PC.

The event started with a look at 2K and Gearbox Software’s Borderlands spinoff Tiny Tina’s Wonderland. The game has an early 2022 release date on PlayStation, Xbox and PC.

Hideo Kojima made a surprise appearance during the event, speaking to host Geoff Keighley about his plans.

The conversation ended with a look at Death Stranding Director’s Cut, which launches on PS5 later this year.

Judging by the trailer, it looks like the Death Stranding update will feature new stealth missions, similar to Meta Gear Solid.

Call of Duty Season 4 was also previewed at the Summer Game Fest, where it was revealed that the content would have a June 17 release date.

Among Us fans were treated to a look at new content, including the Hide and Seek game mode, new colours, and new roles such as Sheriff and Scientist.

Two Point Campus was announced by SEGA, complete with a 2022 release date. A sequel to Two Point Hospital, the game tasks players with building and maintaining a successful university campus.

You can watch the action unfold by clicking play on the YouTube embed below.

ORIGINAL: The 2021 Summer Game Fest event is about to begin, just days ahead of this year’s E3 Gaming Expo.

Organised by journalist Geoff Keighley, the Summer Game Fest is an ongoing selection of events dedicated to new and upcoming video game releases.

It all begins with the Summer Game Fest Kickoff Live stream, which takes place at 7pm BST on June 10.

“This June, the video game industry unites to preview what’s next, starting with a spectacular Kickoff Live! show hosted by Geoff Keighley on Thursday, June 10,” reads the official announcement.

“Keep checking back as events are added to the calendar. Everything can be streamed for free, no badges needed.”

The Kickoff Live event will reportedly feature over 30 games, not to mention live musical performances and developer commentary.

Among Us will make an appearance during the event, as the developer provides an update on what’s next for the social deduction game.

It will be an exciting night for horror fans, as The Evil Dead Video Game showcases gameplay during the stream.

Elsewhere, Escape from Tarkov developer BattleState Games has promised to show something new during the event.

“Get ready to see something new at Summer Game Fest from @bstategames during Kickoff Live on June 10.”

Fans of Call of Duty Warzone and Black Ops Cold War should also tune in, as Season 4 is revealed during Kickoff Live.

With the new Call of Duty season expected to launch within the next few weeks, Activision is expected to unveil the release date and the theme of the season with a special trailer.

You can watch the events unfold live by clicking play on the YouTube embed below.

Finally, organiser and host Geoff Keighley recently dropped a hint that Elden Ring would make an appearance during the Summer Game Fest.

While this hasn’t been confirmed, Keighley has made multiple subtle references to the game on social media.

Needless to say, fans will be most disappointed if the new From Software game fails to make an appearance.

Elden Ring is a fantasy adventure collaboration between From Software’s Hidetaka Miyazaki and Game of Thrones author George R.R. Martin.

“Elden Ring is From Software’s largest game to-date and is set in a sprawling realm steeped in a rich and bloody history crafted by Hidetaka Miyazaki – creator of the influential and critically acclaimed DARK SOULS video game series; and George R.R. Martin – author of The New York Times best-selling fantasy series, A Song of Ice and Fire.”