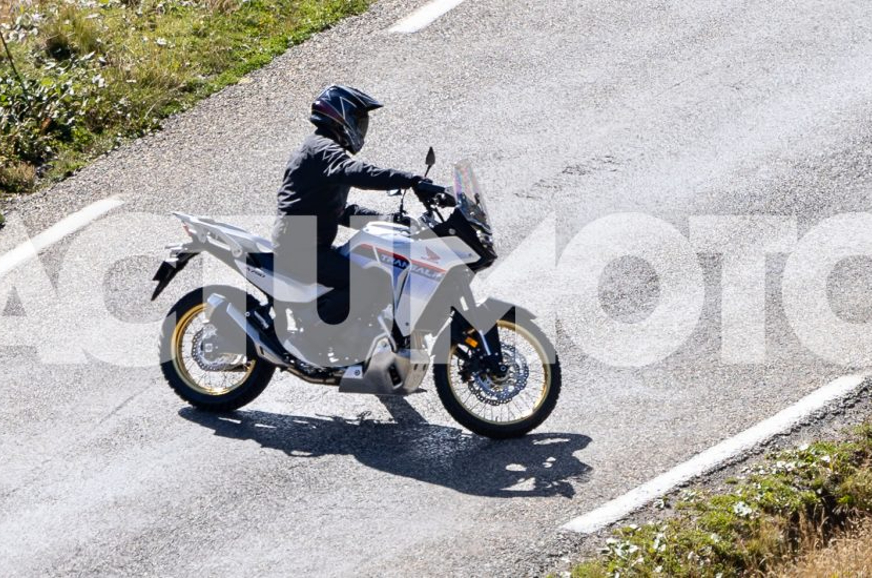 The sub-1,000cc ADV motorcycle is expected to be officially unveiled at EICMA 2022.

For the longest time, there have been talks of Honda developing a sub-1,000cc ADV that’ll sit below the Africa Twin. And now, the motorcycle has been spotted without camouflage, supposedly while it was being filmed for promotional purposes. As is clearly visible in the picture, the motorcycle is called the Transalp, which was expected, as Honda registered rights to the Transalp badge in the USA and other markets. The Transalp name is old, with the motorcycle debuting in 1987.

As can be seen in the picture, the new Transalp seems to borrow design cues from the Honda Africa Twin and even the CB500X in some areas. In fact, there is a nice balance of form and function, with quintessential ADV design bits like a tall windscreen, flat surfaces and minimal tail section. The motorcycle spied is draped in HRC colours, with the Transalp name running across a major portion of the front fairing. The gold wire-spoke rims add a nice contrast to the colours on the bodywork.

Other functional bits that are visible include a prominent grab rail with what looks like a provision to mount a top box. There’s a massive bash plate that covers most of the engine’s sump and the exhaust pipes.

Coming to the engine, there is talk that Honda will plonk in a new 800cc parallel-twin. Its power and torque figures may be in the vicinity of competition such as the Yamaha Tenere 700 or the Aprilia Tuareg 660. Expect the engine to be paired with a 6-speed manual transmission or even the rumoured DCT.

The chassis is also expected to be brand-new, suspended by a USD fork and monoshock.

Honda is expected to officially unveil the new Transalp at the 2022 EICMA motorcycle show, with the bike going on sale shortly after. Regarding its India launch, there is no word yet, but chances of that happening cannot be ruled out.

Do you want Honda to launch the new Transalp in India? Let us know in the comments below.