Study highlights the dangers of white ice conditions in lakes 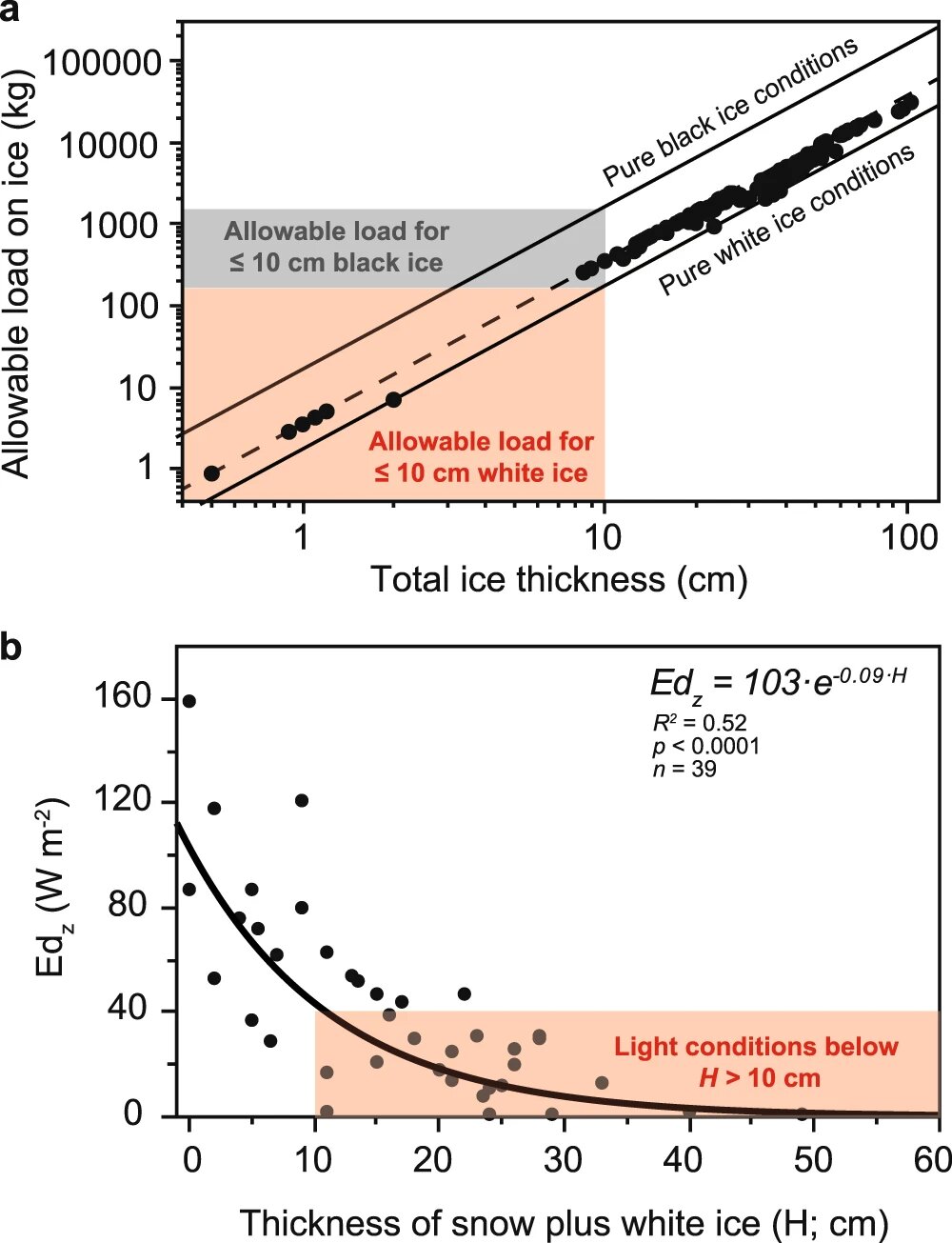 The quality of lake ice is of paramount importance for ice safety and lake ecology under ice, but its temporal and spatial variability is largely unknown. From 2021–2022, an international research team with IGB researcher Hans-Peter Grossart conducted a coordinated sampling campaign of lake ice quality throughout the Northern Hemisphere during one of the warmest winters since 1880.

The team, led by Sweden’s Uppsala University, was able to show that lake ice during this period generally consisted of unstable white ice, which at times accounted for up to 100% of the total ice thickness.

Lake ice can have different qualities, and you can tell the difference just by looking at the color: there is white ice and black ice. Compared to black ice, white ice is more unstable and has a lower load-bearing capacity, making it risky to use for transportation, recreation, or other purposes. Also, white ice is known to significantly reduce the amount of sunlight that penetrates the ice. This threatens the growth and reproduction of all organisms that photosynthesize, and thus the entire food web can be disrupted or malfunctioning.

White ice is likely to become more common in the future

“In the IceBlitz sampling campaign, we took 167 ice cores in ten different countries. In January, most lakes had a thin layer of white ice, which then gradually grew throughout the ice cover. In the period before the ice melted, white ice was the predominant ice type on most of the lakes we sampled,” explained IGB researcher Hans-Peter Grossart, who was involved in the study.

White lake ice usually forms when snow accumulates on ice, melts and refreezes. Or, when rain falls on the snow layer and forms slush, which can subsequently freeze and become white ice. Likewise, when the snow load is sufficient to force lake through cracks in the ice matrix to the ice surface. All of this occurs primarily when air temperatures fluctuate around freezing.

“With continued global warming, the prevalence of white ice in the critical period before melt is likely to increase significantly. In school, we learn that it’s okay to walk on ice if the ice thickness is 10 centimeters or more. We estimated that 10 centimeters of ice under black ice conditions allows a load of 1,753 kilograms, while under white ice conditions they can only support a load of up to 175 kilograms only. Thus, the differences in ice stability are very large. Because the load-bearing capacity of white ice is relatively low, an increase in the proportion of white ice can threaten the use of seasonally ice-covered lakes for livelihood, recreation, transport and other purposes,” warned Professor Gesa Weyhenmeyer, lead author of the study from Uppsala University.

White ice has a reflectance many times higher than black ice, so only small amounts of light penetrate through white ice. Low light conditions in spring caused by a white ice cover and snow on the ice are critical for the development of primary producers and consumers because their growth and reproduction depend on light. Although organisms have evolved a variety of survival strategies, changes in the photoautotrophic community caused by snow and white ice have a cascading effect on the food web, with significant consequences for microbial, zooplankton, and fish populations.

“Ice safety guidelines need to be renewed, and the thickness of white ice also needs to be considered as an important regulator of physical, chemical and biological processes in lakes,” Weyhenmeyer concluded.

The research has been published in Nature Communications.

How to use your smartwatch for photos

Characterizing the earliest galaxies in the universe —…