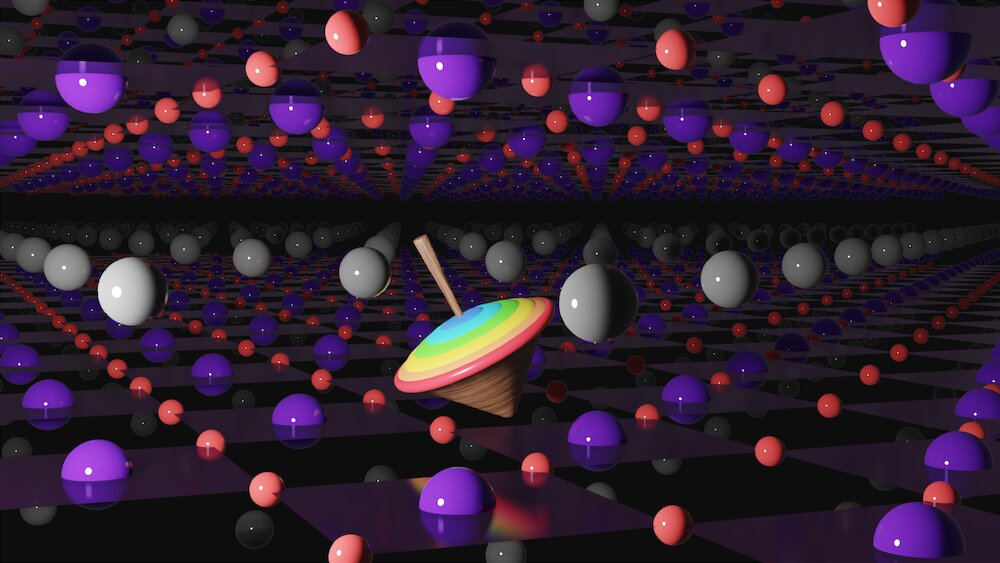 Electrons find each other repulsive. Nothing personal—it’s just that their negative charges repel each other. So getting them to pair up and travel together, like they do in superconducting materials, requires a little nudge.

In old-school superconductors, which were discovered in 1911 and conduct electric current with no resistance, but only at extremely cold temperatures, the nudge comes from vibrations in the material’s atomic lattice.

But in newer, “unconventional” superconductors—which are especially exciting because of their potential to operate at close to room temperature for things like zero-loss power transmission—no one knows for sure what the nudge is, although researchers think it might involve stripes of electric charge, waves of flip-flopping electron spins that create magnetic excitations, or some combination of things.

In the hope of learning more by looking at the problem from a slightly different angle, researchers at Stanford University and the Department of Energy’s SLAC National Accelerator Laboratory synthesized another unconventional superconductor family—the nickel oxides, or nickelates. Since then, they’ve spent three years investigating the nickelates’ properties and comparing them to one of the most famous unconventional superconductors, the copper oxides or cuprates.

And in a paper published in Nature Physics today, the team reported a significant difference: Unlike in the cuprates, the magnetic fields in nickelates are always on.

Nickelates, the scientists said, are intrinsically magnetic, as if each nickel atom were clutching a tiny magnet. This is true whether the nickelate is in its non-superconducting, or normal, state or in a superconducting state where electrons have paired up and formed a sort of quantum soup that can host intertwining phases of quantum matter. Cuprates, on the other hand, are not magnetic in their superconducting state.

“This study looked at fundamental properties of the nickelates compared to the cuprates, and what that can tell us about unconventional superconductors in general,” said Jennifer Fowlie, a postdoctoral researcher at SLAC’s Stanford Institute for Materials and Energy Sciences (SIMES) who led the experiments.

“While our results don’t settle that question, they do highlight where more work should probably be done,” Fowlie said. “And they mark the first time that magnetism has been examined in both the superconducting and the normal state of nickelates.”

Harold Hwang, a professor at SLAC and Stanford and director of SIMES, said, “This is another important piece of the puzzle that the research community is putting together as we work to frame the properties and phenomena at the heart of these exciting materials.”

Few things come easy in this field of research, and studying the nickelates has been harder than most.

While theorists predicted more than 20 years ago that their chemical similarity to the cuprates made it likely that they could host superconductivity, nickelates are so difficult to make that it took years of trying before the SLAC and Stanford team succeeded.

Even then, they could only make thin films of the material—not the thicker chunks needed to explore its properties with common techniques. A number of research groups around the world have been working on easier ways to synthesize nickelates in any form, Hwang said.

So the research team turned to a more exotic method, called low-energy muon spin rotation/relaxation, that can measure the magnetic properties of thin films and is available only at the Paul Scherrer Institute (PSI) in Switzerland.

Muons are fundamental charged particles that are similar to electrons, but 207 times more massive. They stick around for just 2.2 millionths of a second before decaying. Positively charged muons, which are often preferred for experiments like these, decay into a positron, a neutrino and an antineutrino. Like their electron cousins, they spin like tops and change the direction of their spin in response to magnetic fields. But they can “feel” those fields only in their immediate surroundings—up to about one nanometer, or a billionth of a meter, away.

At PSI, scientists use a beam of muons to embed the little particles in the material they want to study. When the muons decay, the positrons they produce fly off in the direction the muon is spinning. By tracing the positrons back to their origins, researchers can see which way the muons were pointing when they winked out of existence and thus determine the material’s overall magnetic properties.

The SLAC team applied to do experiments with the PSI system in 2020, but then the pandemic made it impossible to travel in or out of Switzerland. Fortunately, Fowlie was a postdoc at the University of Geneva at the time and already planning to come to SLAC to work in Hwang’s group. So she started the first round of experiments in Switzerland with a team led by Andreas Suter, a senior scientist at PSI and an expert in extracting information about superconductivity and magnetism from muon decay data.

After arriving at SLAC May 2021, Fowlie immediately started making various types of nickelate compounds the team wanted to test in their second round of experiments. When travel restrictions ended, the team was finally able to go back to Switzerland to finish the study.

The unique experimental setup at PSI allows scientists to embed muons at precise depths in the nickelate materials. From this, they were able to determine what was going on in each super-thin layer of various nickelate compounds with slightly different chemical compositions. They discovered that only the layers that contained nickel atoms were magnetic.

Interest in the nickelates is very high around the world, Hwang said. Half a dozen research groups have published their own ways of synthesizing nickelates and are working on improving the quality of the samples they study, and a huge number of theorists are trying to come up with insights to guide the research in productive directions.

“We are trying to do what we can with the resources we have as a research community,” he said, “but there’s still a lot more we can learn and do.”

Some Phasmophobia ghosts can open the front door, it turns out

All signs point to Android 13 launch in September 2022