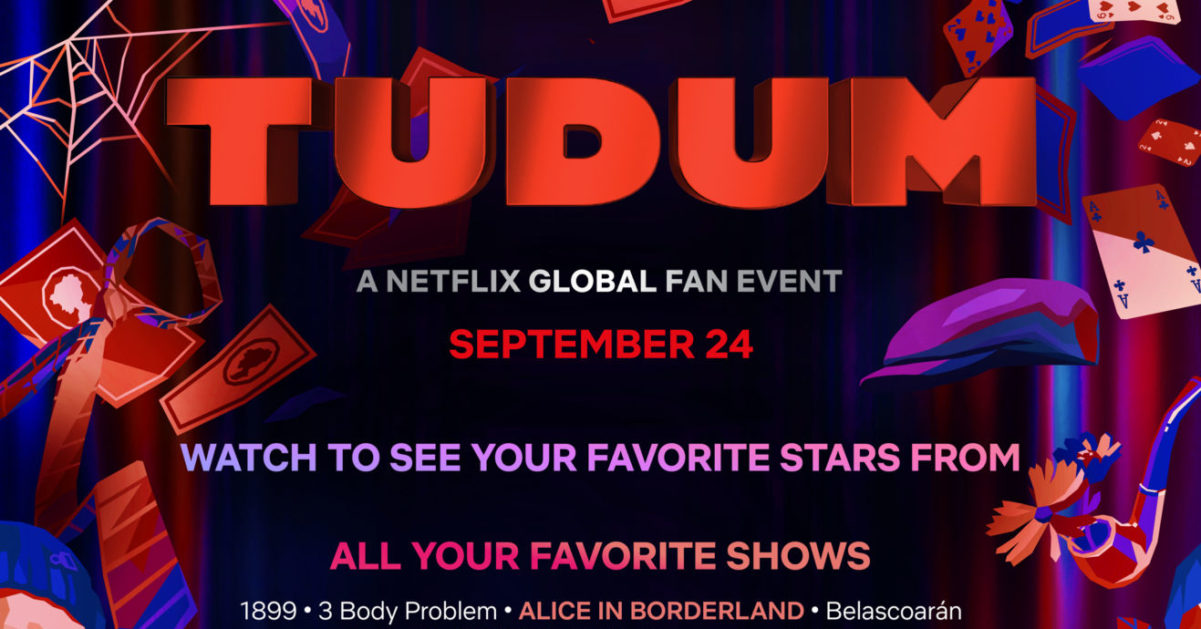 Netflix first put the word out back in July that the global fan event would be returning this fall, and now we’re getting a lot more details on what we can expect. Of course, we’re talking about Tudum, which will be hitting screens around the world on Saturday, September 24th. And over the course of 24 hours, hosts Jamie Foxx, Millie Bobby Brown, Noah Centineo, Choi Min-ho, Cho Yi-hyun, Zakir Khan, Prajakta Koli, Maite Perroni, Sheron Menezzes, Maitreyi Ramakrishnan, and others are set to offer viewers news and exclusive reveals from over 120 series and films. And we’re talking about a very impressive line-up of films and series, including The School for Good and Evil, Wednesday, Alice in Borderland, Stranger Things, Bridgerton, Money Heist, Slumberland, Enola Holmes 2, Glass Onion: A Knives Out Mystery, Emily in Paris, Manifest, The Witcher, and a ton more. But don’t take our word for it… not when you can check out the line-up in the key art poster below:

Now here’s a look at the official trailer for the global fan event, followed by all of the details you’ll need to know about how to join in on the festivities:

Tudum is back! The virtual event that garnered over 25.7 million views from Netflix fans in 184 countries around the world last year is returning Saturday, September 24 with five global events in 24 hours: starting in Korea followed by India, then the United States and Europe with a special preview of the great entertainment coming from Latin America, and concluding with a celebration out of Japan. Tune in for an exciting day of exclusive news, never-before-seen footage, trailers, and first looks, as well as interviews with Netflix’s biggest stars and creators. The free virtual event is a celebration of Netflix fandom and is dedicated to sharing the scoop on over 100 fan-favorite shows, films, and specials from across the globe.

So here’s a look at how the day-long event breaks down so you can adjust your alarms accordingly:

10:00 am PT: Fans will get exclusive news from our shows, movies and games coming out of the United States and Europe, as well as an additional event that previews the great entertainment coming from Latin America.

As for where you can go to check out Tudum: A Netflix Global Fan Event, the event will be available across Netflix YouTube channels in a number of different languages. And make sure to check out Netflix’s official fan site (here) for the latest news and stay tuned for details about the titles and celebrity lineup set for September.

Check Out More Than 5 Minutes Of Like A Dragon: Ishin In New Trailer