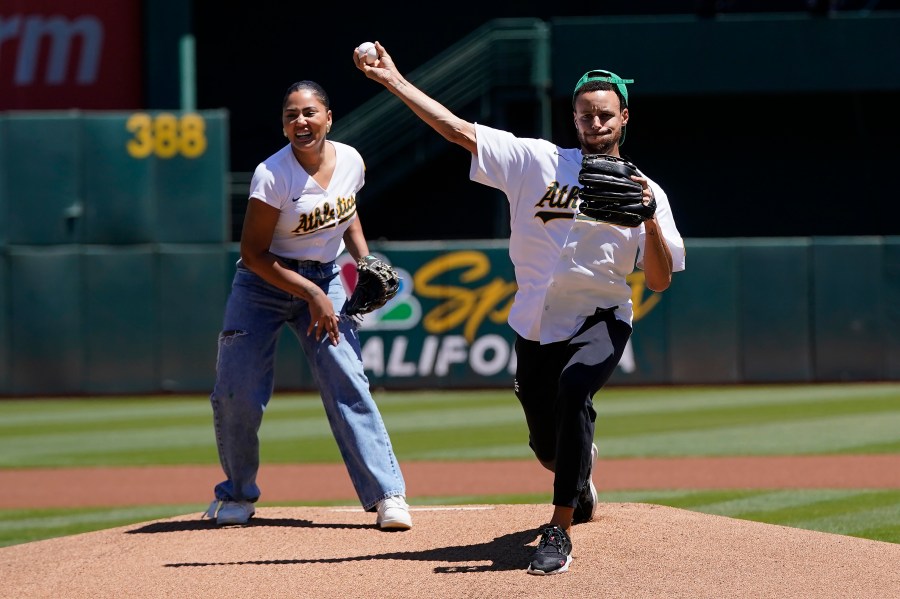 OAKLAND, Calif. (KRON) — Golden State Warriors superstar Stephen Curry and his wife Ayesha threw out the first pitch at the Oakland Athletics’ home game against the Houston Astros Wednesday afternoon. However, the first pitch ceremonies didn’t go as smoothly as they might’ve hoped.

Video on social media shows the Currys were supposed to each throw a pitch at the same time — each one had their own catcher set up for them. Ayesha mistakenly throws the ball to the catcher intended for Steph, which leads to the latter to nearly throw the ball behind his catcher.

Steph, who is regarded as the greatest and most accurate distance shooter in NBA history, didn’t exactly translate his basketball skills to the baseball field. The 2022 NBA Finals MVP said on the NBC Sports broadcast he played baseball until he was 13.

This comes after Steph tweeted he would crush Toscano-Anderson’s pitch out of the park — Jose Bautista style. That is in reference to Bautista’s iconic bat flip in the 2015 ALDS.

Steph and Ayesha both wore “Eat. Learn. Play” No. 19 A’s jerseys. They represented their charity, which was founded in 2019, that looks to improve lives of kids and families in Oakland, the Bay Area, and across the country, according to its website.

The Currys are very familiar with the Oakland Coliseum. Stephen played right next door at then-Oracle Arena from 2009-19 before the Warriors relocated to Chase Center in San Francisco.