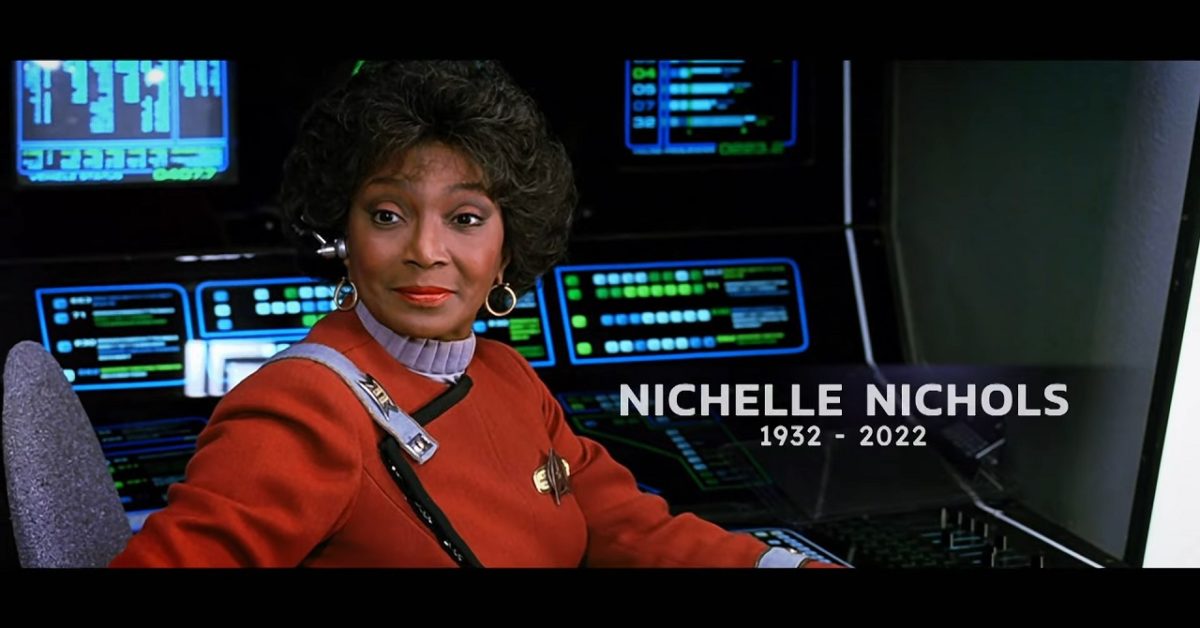 While there was a lot of great stuff for fans to enjoy coming out of today’s Star Trek Day, probably the best part of the festivities was also the most touching and heartwarming one. To pay tribute to the late Nichelle Nichols (Lt. Nyota Uhura, “Star Trek The Original Series”), who passed away earlier this summer, folks from across the franchise’s universe stepped up to offer testimonials in a special featurette released earlier today. Dawnn Lewis (Star Trek: Lower Decks), Sonequa Martin-Green (Star Trek: Discovery), Celia Rose Gooding (Star Trek: Strange New Worlds), Alex Kurtzman (Executive Producer), Hanelle Culpepper (Director), Kate Mulgrew (Star Trek: Voyager/Star Trek: Prodigy), Jenny Lumet (Executive Producer), Michelle Hurd (Star Trek: Picard), Rod Roddenberry (Executive Producer), Tawny Newsome (Star Trek: Lower Decks), Col. Frederick Gregory (Astronaut), and Wilson Cruz (Star Trek: Discovery) share their thoughts on how Nichols paved the way for a universe in which every viewer has started to see themselves represented on the screen… saving the day… boldly going where no one has ever gone before.

In addition, CBS and Paramount+ will jointly donate $1 for every Tweet (one per handle) sent that uses the hashtag #StarTrekUnitedGives, or #CelebrateNichelle from 12:00 am PT on September 8 through 11:59 pm PT on September 8, 2022. The monies raised will be divided evenly among charities that do the real-world work of encouraging diversity, fighting injustices, and inspiring the minds of new generations. Now here’s a look at the Star Trek Universe, reminding the world of Nichols’ lasting legacy & impact released earlier today:

During a 2011 interview with StarTrek.com, Nichols shared the story of how Dr. Martin Luther King inspired her to remain with the iconic series after she had made the decision to leave.

“When I told Gene [Roddenberry], I walked away, and as far as I was concerned, it was a fait accompli,” she said. “Remember, I grew up in musical theater. I belonged to the theater, not to television or movies. Those were things I did when I hadn’t quite made it where I wanted to go but was on my way. I had quite a lot going for me. I had no idea of the power of being on a screen and people seeing you weekly. But I was ready to go. As nice as this little part was, and I loved the people, and I loved working on it, and I was getting experience in a new medium, I didn’t think twice about [leaving].”

Though Roddenberry pleaded with Nichols to stay, the actress still handed him her letter of resignation. So Roddenberry took the letter but wouldn’t accept it… yet. “He took it and looked at it with sad eyes. He was behind his desk, and I was standing in front of him, and – I’ll never forget it – he said, ‘I’m not going to accept this yet.’ He put it in his desk drawer and said, ‘Take the weekend and think about this, Nichelle. If you still want to do this on Monday morning, I will let you go with my blessings. I said, ‘Thank you, Gene.’ And I thought, ‘Whew, that was rough, but I got through it,'” Nichols shared.

Attending an event that weekend, Nichols was seated at the dais for an event in Beverly Hills when she was approached by an organizer with a request for her to meet a really big fan. “One of the organizers of the event came over to me and said, ‘Ms. Nichols, I hate to bother you just as you’re sitting down to dinner, but there’s someone here who wants very much to meet you. And he said to tell you that he is your biggest fan,'” Nichols shared. “I said, ‘Oh, certainly,’ I stood up and turned around and who comes walking over towards me from about 10 or 15 feet, smiling that rare smile of his, is Dr. Martin Luther King. I remember saying to myself, ‘Whoever that fan is, whoever that Trekkie is, it’ll have to wait because I have to meet Dr. Martin Luther King.’ And he walks up to me and says, ‘Yes, Ms. Nichols, I am your greatest fan.’ You know I can talk, but all my mouth could do was open and close, open and close; I was so stunned.”

After Dr. King revealed that Star Trek was the only show that he and his wife Coretta would allow their little children to watch and that Uhura was a character who represented “dignity and knowledge,” the civil rights leader learned that Nichols was planning to leave the series. Needless to say, it was news Dr. King wasn’t too happy to hear.

“He said, ‘What are you talking about?'” Nichols shared. “I told him. He said, ‘You cannot,’, and so help me, this man practically repeated verbatim what Gene said. He said, ‘Don’t you see what this man is doing, who has written this? This is the future. He has established us as we should be seen. Three hundred years from now, we are here. We are marching. And this is the first step. When we see you, we see ourselves, and we see ourselves as intelligent and beautiful and proud.’ He goes on, and I’m looking at him and my knees are buckling. I said, ‘I…, I…’ And he said, ‘You turn on your television and the news comes on, and you see us marching and peaceful, you see the peaceful civil disobedience, and you see the dogs and see the fire hoses, and we all know they cannot destroy us because we are there in the 23rd century.’

For Nichols, that was all it took for her to reverse course. “I went back on Monday morning and told Gene what had happened. He sat there behind that desk, and a tear came down his face, and he looked up at me. I said, ‘Gene, if you want me to stay, I will stay. There’s nothing I can do but stay.’ He looked at me and said, ‘God bless Dr. Martin Luther King. Somebody truly knows what I am trying to do.’ [Roddenberry] opened his drawer, took out my resignation, and handed it to me. He had torn it to pieces. He handed me the 100 pieces and said, ‘Welcome back.'”

Queen Elizabeth II Owned The 2nd Most Expensive Car In The World. Here’s Why It Was Special