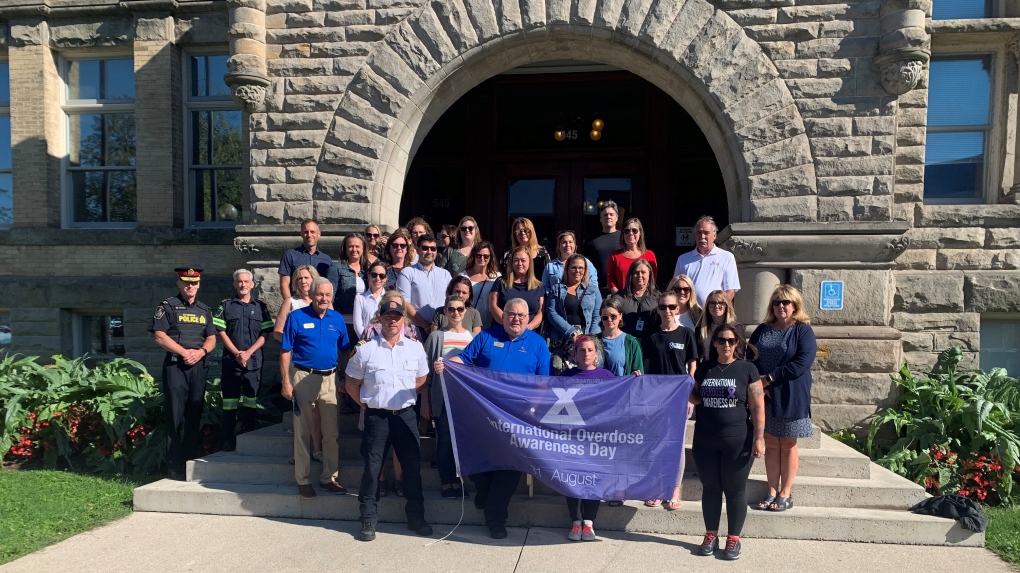 Lisa Kirk couldn’t handle the pain of losing her children.

“I took as many as 100 pills at once,” says Kirk who was sitting on the bench in front of the Grace Café in St. Thomas, Ont. on Wednesday.

“I gave up totally after losing my children and I couldn’t handle it. It was pain, and I didn’t need that much, but I thought I did. Your mind sometimes say to you, ‘You need this,’ and for whatever reason you do it,” she explains.

Kirk shared her story to CTV News London on International Overdose Awareness Day. The goal of the day is to reduce stigma and shame surrounding those who have overdosed.

A proclamation was read in front of St. Thomas City Hall and speakers from those on the front lines of the opioid crisis shared their message.

“People use for many reasons,” says Amanda Zielinski, volunteer coordinator with The Nameless, a street-level harm reduction outreach group.

“Pain management, the result of emotional pain, trauma and mental health. All these things are either diagnosed or undiagnosed and they just compound into so much pain and that it creates the only thing that can take it away is self medication,” she explains.

“Behind each one of those numbers is a story, a person, a family member and a human being for whom we need to cherish,” says Dr. Alex Summers, MLHU medical officer of health.

He adds, “Even in the absence of death data from 2021, we know that this crisis is worsening. The number of deaths in emergency department visits go up in 2021. And that’s a decent indicator of what we would have anticipated in deaths as well.”

The Nameless says it has been a difficult year. Just a few months ago, the community lost three visibly homeless individuals, who were experiencing mental health issues.

“The drug supply at that point we determined was being cut with so many other things that someone might think they’re taking one drug, but they’re actually taking three or four other ones and that’s what’s causing people to overdose,” says Zielinski.

One of them died in the bathroom of the Grace Café. Kirk says she was there, and describes what she remembers from the incident.

“I was waiting for the bathroom, and there hadn’t been an answer in quite a while,” recalls Kirk.

“It must have been five minutes, but it seemed like forever. They pulled him out of the bathroom, and I looked at his face and I thought it’s too late. I want to try and I’ve never given anybody Narcan like that, so I didn’t know what to do. It was hard to sit there and watch that,” she adds.

Kirk says she’s given up using pills, has turned her life around and has even got off the streets.

“I think that’s why I am where I am today,” says Kirk. “I’ve watched it too many times. I’ve seen it play over in my head about people dying and I can’t take it.”

This Pop-Up Haunted House Book is So Cute, You Know Your Kids Need it for Halloween Kids Activities Blog