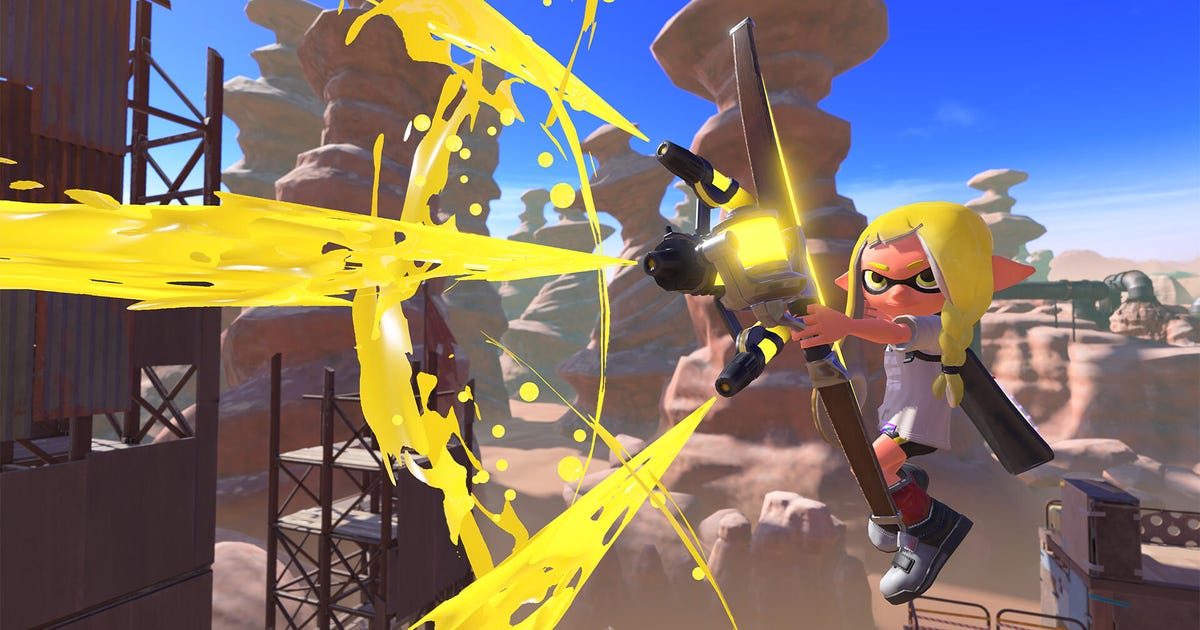 The second I saw the Splatana Wiper in the Nintendo Direct broadcast earlier this month, I couldn’t wait to swing it for myself. I hadn’t played much of the colorful Nintendo shooter series Splatoon since the second game hit the Switch back in 2017, but the prospect of flinging streams of ink around the arena with a katana-style squeegee weapon still seemed incredibly fun.

Splatoon 3 lands on Switch on Sept. 9, but I got to swing Splatana a little early by trying out the game’s solo campaign and multiplayer modes at a preview event. Set up on one of the beautiful new Splatoon 3 Switch OLED models at a demo booth, I was surprised at how quickly I got ink-legs back.

After the play session, I spoke with Nintendo of America’s Nate Bihldorff, senior vice president for product development and publishing, and Bill Trinen, vice president of player and product experience, about new additions to the game like the single player campaign, tweaks to Salmon Run and diving back into Turf War.

If you’re looking to try out Splatoon 3 before Sept. 9, you can download a demo now. You’ll be able to explore the Splatsville hub area and learn the basic gameplay in a tutorial. That should set you up nicely for Saturday, when demo players can take on the world in Turf War, in the game’s first online Splatfest event. You’ll need a Nintendo Switch Online subscription to play in the event, but anyone who installs the demo should find a free seven-day trial code in their inbox.

The brief single player section was key to reminding me how to battle enemies using the ink-firing weapons and dive into those pools to zoom around the arenas, with some light puzzle solving to spice things up. As you’d expect with most Nintendo games, it all felt pretty intuitive and fun despite not having played in the series for a few years.

This also gave me a chance to try out motion controls (where you move the pad around to aim) and traditional controls (using the right stick to aim); the former made me feel like I was wrestling with the controller, so I stuck with the latter. Your mileage may vary.

“You’re having an incredible time playing through this adventure, you’re going through serious platforming challenges, you’re learning to use a whole bunch of new weapons that maybe you’ve never used before,” he said via Zoom.

“You don’t realize that you’re getting better at the multiplayer game while you’re doing it — all those skills that you’re picking up to just make it through the [single player] mode are absolutely applicable.”

This section gave me a chance to try out the Tri-Stringer Bow, an extremely fun new weapon that lets you fire three simultaneous shots vertically mid-jump or horizontally from the ground. Your ink-bolts explode a few moments after they land, allowing you to time your shots strategically to hit moving enemies — it’s super satisfying to use.

“I was blown away just by how versatile it is; all the different strategies that that weapon alone can unlock,” Trinen said of the bow. “It’s been a real joy to have those new layers to dig into, even though the game still feels so familiar and accessible”

I didn’t get to explore Splatsville, Splatoon 3’s massive megalopolis hub world or get a sense of the overarching Return of the Mammalians story — that’ll be revealed in a deep-dive livestream on Thursday — but my solo experience definitely helped me get my ink legs back before diving into multiplayer.

The preview transitioned gently into multiplayer with the co-op Salmon Run, which pits you and up to three other players against increasingly tough waves of enemies punctuated by boss battles. The goal is collect eggs dropped by defeated enemies and get them to basket in the middle of the arena.

This mode was previously seen in Splatoon 2 but periodically rotated out so you couldn’t always play online. The mode will always be available in the third game, and the new ability to throw the eggs between players adds a new layer of strategy.

“Anybody who’s ever played Salmon Run has had those waves where you just need one more egg,” Bihldorff said. “Somebody’s got it, but like they can’t quite get there. Being able to do Hail Marys to get it into the basket right under the time limit — that’s going to happen all the time [with the new passing ability].”

I wish I could say I was totally awesome with the passing ability during the preview session, which I played with YouTuber NintendoFanGirl and two Nintendo publicists (all of whom seemed to be infinitely more competent players than me, I was player 2A), but I wasn’t quite competent enough to pull it off regularly in the midst of all the chaos. We came without a hair of winning our first match, but managed to come out on top in our second.

This will definitely be the mode I play most once the game is out — the strategic coordination element is extremely appealing and you can ramp up the difficulty if you want a more intense time.

The final part of the preview was the most familiar — Splatoon mainstay Turf War, in which the goal is to ink more of the stage than your opponents (and ink them before they ink you). This felt as intense as ever and gave me a chance to wield the Splatana Wiper at last.

A little like the Tri-Stringer Bow, charging up and slashing with the Splatana sends out a long, thin splash of ink, while a quick slash sends out a short, wide one. It’s the kind of weapon that forces me to get closer to my opponents than I’d normally like, but is so cool that I’m willing to take the risk.

“The really satisfying thing to do with it is to run right up on somebody and unleash a charge,” Bihldorff said of the Splatana. “Once I did that once or twice, I realized that I had to do it a lot more — I’m going to have to change my playstyle when it comes to getting up close and personal.”

It was a little too frantic a situation to figure out the new squid roll move, which lets you leap out of ink and do a fabulous twirl, but the new squid surge offered a fun way to speedily swim up ink-covered walls and hop out at the top.

I’m not sure how useful I was to my teammates as I experimented with the new weapons and moves — sorry guys — though the new multiplayer lobby gave me a chance to hone my skills between matches (you can also holograms of online friends running around this area).

Despite the new weapons, Turf War highlighted how familiar Splatoon 3 felt — I suspect the truly rewarding elements of this sequel are more nuanced than I could experience in my brief play session. It’s a sentiment echoed by Trinen, who proudly revealed that Splatoon 2 is his most-played game on Switch (perhaps the third game will eclipse it in time).

“With all of the new kinds of features and capabilities that have been layered in, I find that there’s a lot to unpack and uncover,” he said. “Something like squid surge and squid roll changes the way that I would approach returning levels that I’ve played in prior versions — I have to rethink how I play in those levels. What’s my strategy? How do I layer in these new abilities?”

Nintendo Switch, 5 Years In: What Comes Next?