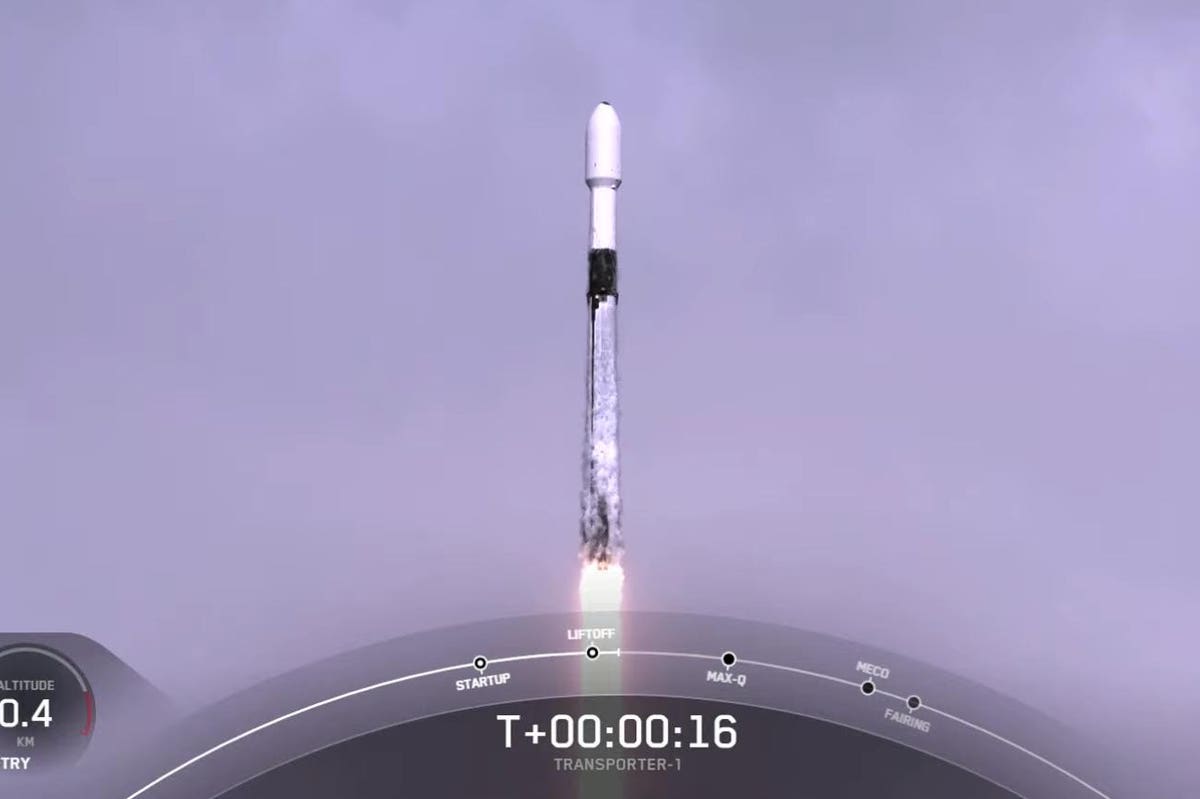 Bacteria navigate on surfaces using a ‘sense of…

Elon Musk’s company SpaceX has successfully launched the Transporter-1 mission, breaking the record for the most number of satellites ever flown on a single rocket.

Today, Sunday, January 24 at 10 A.M. Eastern Time, the company’s Falcon 9 lifted off from Cape Canaveral in Florida, with 143 commercial and government satellites on board.

The satellites were launched into a sun-synchronous orbit, one that stays in constant daylight, about 500 kilometers above Earth’s surface.

About eight minutes later, the bottom section of the rocket returned to Earth and landed in the Atlantic Ocean on a floating barge called Of Course I Still Love You – a norm now on SpaceX launches.

The launch was the first in SpaceX’s new “Rideshare Program”, designed to launch many satellites at a time and enable organizations to reach space at a lower cost.

SpaceX has launched rideshare missions before, notably its SSO-A mission in 2018 with 64 satellites on board, but this new program is intended to greatly expand the launch opportunities on offer.

It cost just $5,000 per kilogram to place a satellite on this rocket, or $1 million for 200 kilograms. The total mass of all the commercial satellites on board was about 2,700 kilograms, equating to almost $14 million.

The launch of 143 satellites broke the previous record for the most number of satellites on a launch, set by India in 2017 when it launched 104 on a single rocket.

Ten of SpaceX’s own satellites in its controversial Starlink internet mega constellation were included, which reached the milestone of 1,000 satellites launched last week.

The total mass of the satellites on board was about 5,000 kilograms.

However, the large number of satellites on board – while impressive – has caused some concern, specifically regarding space traffic management.

SpaceX did not release a detailed manifest of the satellites on board, meaning the purpose and nature of some of them was unclear at the time of launch.

“One of the problems is that we don’t even know for sure what all of the 143 satellites are,” astronomer and spaceflight expert Jonathan McDowell from the Harvard-Smithsonian Center for Astrophysics told SpaceNews.

With some of the satellites being as small as a shoe box, they will be hard to track in orbit, a necessity to avoid collisions with other satellites.

Or, in other words, one out of every 20 active satellites now in orbit were launched on this Transporter-1 mission.

Nonetheless, the launch is a huge milestone for SpaceX, letting it offer a new type of service unmatched by any other launch provider.

At $5,000 per kilogram, the flight was far cheaper for the satellites on board than on a rival commercial rocket.

For example, the New Zealand-based launch company Rocket Lab offers space on its smaller Electron rocket at about $20,000 per kilogram.

However, while these smaller launchers can’t match SpaceX on price, they can offer a dedicated launch to a specific orbit with a short wait time.

SpaceX with its rideshare missions, on the other hand, can only launch multiple satellites into one orbit, posing some issues to then move the satellites elsewhere.

Still, the service has clearly proven popular, and a Transporter-2 mission is expected later this year.

Now many will be hoping, if these launches are to become more regular, that more can be done to safely manage the large amounts of satellites deployed in orbit.

Five Foods You Should Eat to Improve Your Heart Health