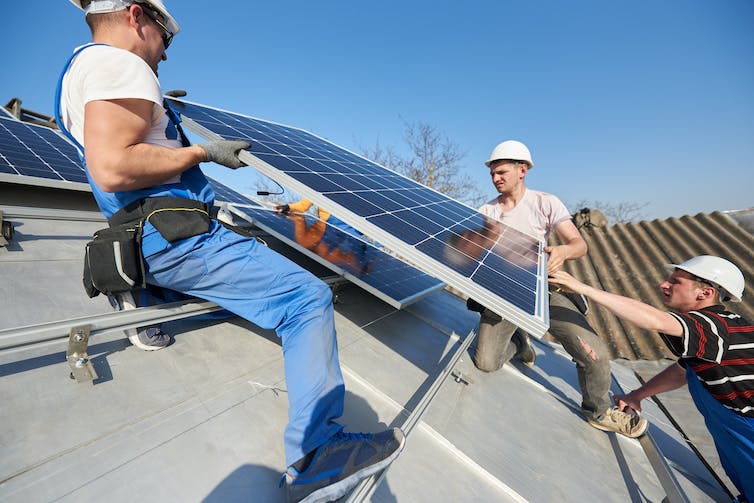 Almost a third of Australia’s estimated ten million households now have solar on the roof. But as the nation moving fastest to produce energy on our homes, we are also encountering teething problems, such as “curtailment” of output.

This issue will be one we have to overcome as ever more Australians install solar. Our grids were designed primarily for large fossil fuel power stations transmitting electricity in one direction, while solar households both consume and export power.

That means in some conditions, household solar may contribute to spikes in voltage levels outside of the acceptable range, especially as voltage levels are typically already high.

To counter this, your solar system can stop exporting to the grid or even shut down temporarily if voltage levels are too high. This is called “curtailment”.

So what’s the issue?

The average solar household lose less than 1% of its power production to curtailment – and even less for those with home batteries. While that sounds minor, an unlucky few households are losing as much as 20%.

Why the drastic difference? It depends on factors like the house’s location, the local electricity network equipment, home wiring, the number of solar systems in the area, and the size of a solar system and inverter settings, which can vary depending on the date of installation.

These findings are from our scoping study in South Australia, conducted in partnership with AGL, SA Power Networks and Solar Analytics as part of the RACE for 2030 research centre.

We analysed two out of three modes of automatic curtailment, with further research underway to assess the third mode, which may account for greater overall curtailment.

Read more:
Now they want to charge households for exporting solar electricity to the grid — it’ll send the system backwards


This issue is set to get bigger, as more and more solar systems are installed and export to the grid at the same time.

Our research interviewed and ran focus groups with South Australians who have solar. We found most participants didn’t know about curtailment and hadn’t experienced it or noticed it.

But when we described curtailment, most people found it off-putting and questioned whether rooftop solar owners should be made to absorb any losses, given the contribution of rooftop solar to the renewable energy transition.

Not only that, our participants told us they believed the issue could slow down the adoption of solar and potentially undermine faith in the system.

Is this a problem for solar uptake?

The issue of curtailment means people may not get everything they expect out of their solar system. But this may not be a deal breaker, given earlier research and our study both show that people hope to benefit in many different ways from installing a solar system.

For instance, some want to reduce their reliance on fossil fuels and contribute to a cleaner grid. Others want to be less reliant on electricity providers and enjoy producing and using their own energy. And some just want cheaper electricity, and don’t mind whether they get these savings through selling their power or just buying less of what they need from the grid.


The good news is that as the solar sector matures, new ways are emerging of maximising value from our solar, including:

While attractive in their own right, these options can also reduce how much your solar system is curtailed, and have the potential to help tackle challenges at a grid scale.

Other changes to electricity and grid access and pricing could also help us better manage curtailment.

Flexible export limits being trialled in South Australia and elsewhere would mean households could export electricity to the grid when it is needed, while occasionally being prevented from doing so when the network does not have capacity.

Flexible export limits also mean households can install larger solar systems regardless of their location within the network. They could stop curtailment affecting solar households in unexpected and uneven ways.

Other responses include programs to reward households for having their export curtailed, recognising it as a service to the market and the network.

There is no single solution to the issue of curtailment. But the different solutions described above may contribute to the successful integration of more rooftop solar energy and pave the way for a more renewable grid.

Now is the time to talk about the future of solar in Australia, and the ways we can value it, use it and manage it when abundant.

“Earlier They Said I Have No Money To Buy A Flight…