Snow sets the scene for the Brockville Christmas Market 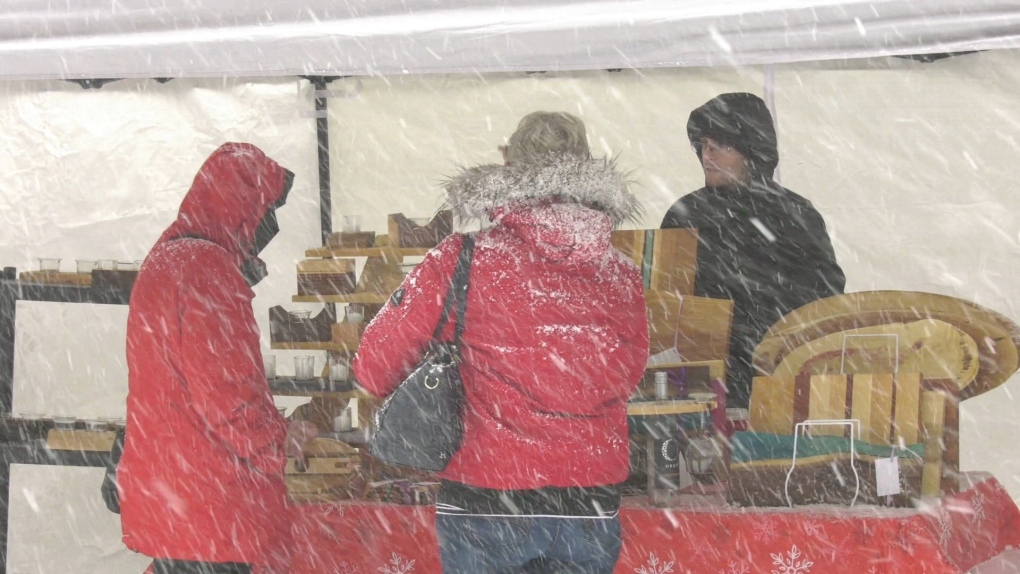 Shoppers were excited to get ready for the holiday season as the fourth annual Brockville Christmas Market returned, with an added blast of wintry weather.

A thin band of lake effect snow off Lake Ontario helped set the scene for vendors at the Brockville Shopping Centre on Saturday.

“It’s a little cold when the wind picks up, a little bit breezy but you know what, the snow is bringing on the festive feeling so it’s worth it,” said Alyssa Tedford of Alyssa’s Sweet Confections.

“Sales have been very good actually, all things considered,” she added.

“People showed up right on time, it was very busy, everybody’s happy, we just aren’t thinking about the drive home but that’s ok!”

“Tomorrow is supposed to be sunny so we get a little bit of everything,” Aikin said.

Shoppers were knocking items off their Christmas lists, like the Laderoute family.

“We’ve got a really big beautiful Christmas wreath, it’s time to upgrade and Christmas gift for our niece,” Lisa Laderoute said. “She’s a year old so we got her a nice little homemade Christmas book.”

Woodcarvings were a popular seller this year.

“Best seller today would be my snowman holding the sled over there or the Grinch, the Grinch is very popular,” said Aikin. “I find a lot of people are looking for leaners to put on their porches.”

Savoury sweets, also popular according to the Fars and Lee families.

“Lots of sweets!” they said. “Anything to do with goodies, cakes muffins, chocolate. Got some cake from the lady over here and some more cake in the other bag. Butter tarts!”

“Traffic’s been pretty steady, surprising because of the weather,” she said. 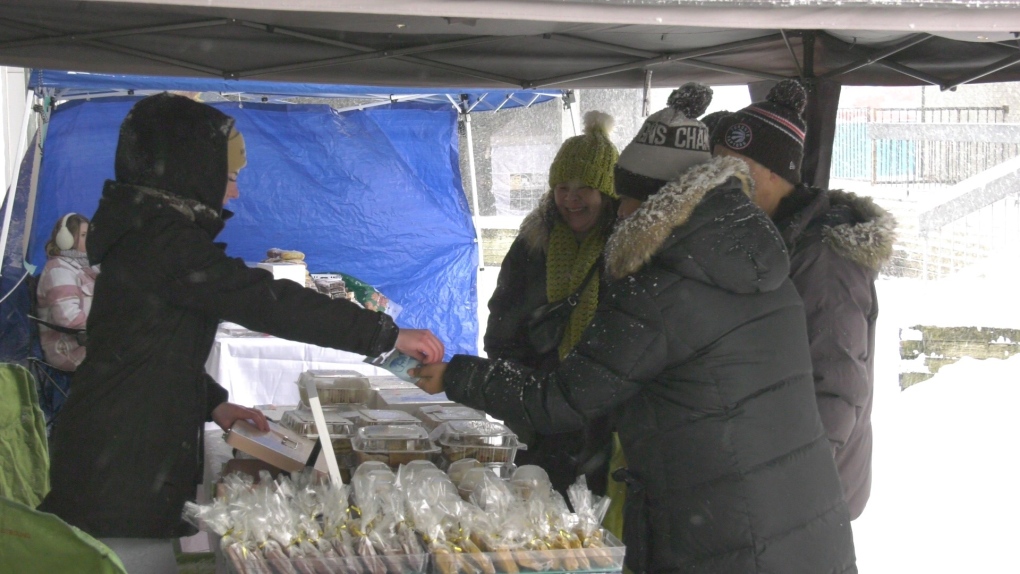 Organizer Nathalie Lavergne says there are more than 40 local vendors to choose from.

“Last year was freezing, last year was cold and windy and miserable,” she said. “Today, ok, dress properly. It is winter in Canada, right! Does it look like the snow is bothering me? Not at all!”

“Vendors are happy because people are coming to shop, you know, and it puts you in the mood and people are just happy that it’s happening again so I’m super thrilled,” Lavergne said, batting show off he shoulders.

“It’s just crazy! But you know what you have to embrace it if not you are going to be miserable for the next four months,” she laughed.

And while Scott Primeau’s Scooby Doo Mystery Machine may have looked out of place at the market, is was there to fundraise for families affected from a downtown fire on Church Street a week ago.

“There’s 37 people displaced, so they are living in a hotel right now,” he said. “Winter is here, it’s Christmas, they need money, they need donations, they need anything at all so I’m here trying to help.”

His effort, continuing on Sunday as well.

“We’re having some live entertainment at The Bar here in Brockville, downtown and it’s from 12 to 7,” he said. “We’re going to be collecting money all day and donations, food and clothing.”

“Everybody can make a difference, just a little bit of effort is all it is,” Primeau added, noting people can contact him through email to donate.

The weather was not stopping the live entertainment at the market, with kids also making the best of it, horsing around in a snow pile.

But some shoppers were not looking forward to that snowy drive home.

“It’s ok, as long as you have your snow tires on, you’re fine,” said Ali Belhis cleaning off his vehicle. “Otherwise, just drive slowly!”

The forecast, also looking much better, with a mix of sun a cloud and one centimetre of snow expected.