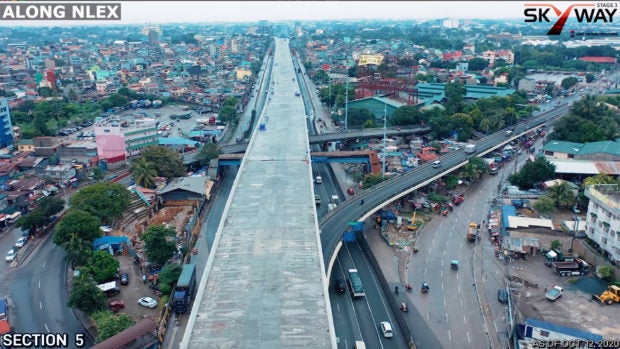 MANILA, Philippines — Conglomerate San Miguel Corp. (SMC) is setting its sights on a host of new infrastructure projects, including a P735 billion airport in Bulacan that will open by 2025 and new expressways.

Over 18 kilometers long and a history that spans multiple administrations, the Skyway Stage 3 will link the North Luzon Expressway and South Luzon Expressway, significantly reducing travel time for motorists within key parts of Metro Manila.

With the full opening of all seven lanes of Skyway Stage 3 on Thursday, Ang said the toll road can handle 200,000 vehicles per day or half of the volume of Edsa, one of Metro Manila’s busiest highways.

“This will greatly contribute to decongesting Metro Manila traffic,” Ang said in a statement.

Ang on Thursday thanked the Duterte administration and the economic team for the “significant role in settling right-of-way issues that delayed the massive infrastructure project for years.”

“This is a game-changer for our economy, especially now that we are still dealing with the pandemic. By providing seamless access between north and south, we also unlock the true potential of our provinces,” Ang said.

Still, SMC said it played an active role in securing right-of-way, buying up proprieties along the project’s alignment. Moreover, it paid for the reconstruction of three bridges: San Juan Bridge, Concordia Bridge, and Sevilla Bridge.

These bridges were located near the project’s path and had to be demolished.

“This is just one of 25 projects which we will complete under the Edsa decongestion program,” Villar said in a separate statement.

A Toll Regulatory Board spokesman said the final fee has yet to be set, however, the figure was earlier estimated at up to P90 for an end to end trip.

SMC, a food, drinks, and infrastructure conglomerate, indicated that more projects were on the way, with the largest being its planned airport city in Bulacan province. Ang said the initial phase of the airport will open in four years.

While delayed, the international air gateway will have its groundbreaking within the first quarter of 2021.

SMC will also build and complete two new expressways to the Bulacan airport by 2023.

“Together, we are building the foundation for future economic growth that’s inclusive and sustainable,” Ang said.

This will be a six-lane elevated toll road along the banks of the Pasig River, linking R-10 in Manila, Edsa, and C5 and decongesting Rizal, Cainta, and Marikina by 2023.