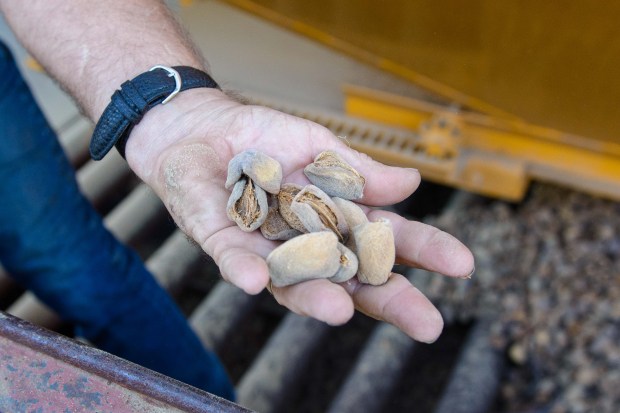 CHICO — The forecast is in, and it’s raining almonds. The start of September is the brunt of almond harvest, and the shakers, sweepers and hullers are back at work.

Almond and walnut farmer Walt Stile is a fourth generation Chico farmer and is one of the few almond growers today who still operates their own huller. But with rising costs in the farming industry, Stile anticipates the huller’s decades-long streak of operation to come to an end.

Stile reminisces of growing up and running the farm with his father during summer breaks, sometimes indulging in the distinct scent of prunes drying in their dehydrator.

“I grew up running a huller,” Stile said. “I remember picking on the tables at 10 years old with my Sony Walkman.”

On the outskirts of Chico, Stile’s “home” hulling facility can process a set of double trailers in about 6 hours — just enough for his own orchards and sometimes a box or two from the neighbors.

It also dates back to when his dad and his grandfather were managing the orchards — the original W. L. Stile & Son.

This year, Stile is harvesting almonds that survived a harsh frosting event in February when freezing temperatures endangered or even destroyed almond buds in their most fragile phase of growth.

“My peerless, which are an early blooming variety, on the outside edges — not a single nut,” Stile said.

Stiles said he can usually fill a trailer of Sonora almonds each harvest, but this year brought in just four boxes.

“That frost we had did a lot of damage in the almond industry in Northern California, and now is when we see that,” Cecil said. “When you go into an orchard and there is not a single nut you can shake off, that is the devastation that the frost caused.”

Cecil said damage didn’t happen at every orchard, but had significant impacts on smaller areas. Crop reports from the Almond Board of California and the Butte County Agricultural Commissioner will take some time to assess the harvest crops, Cecil said.

“Almond growers are reporting that almond crop receipts are significantly smaller than they have been in previous years and that is likely due to the late freeze we had in spring,” Cecil said.

With less almonds produced and rising costs in the farming industry, Stile said running the huller has become expensive for him to continue running and is considering shutting it down next season to join an industrial hulling co-op, a common practice by most other modern, smaller almond orchards.

“This is my last year, I really think. The expense; the labor — it doesn’t pay. And this is the slow spot in my operation,” Stile said. “I can only process so much because I’m so small and I don’t have all the new equipment.”

Stile has been employing farmers at his hull who may need to find other work as his hulling operation shifts.

“It’s obvious that Walt is continuing to do that because that’s best for his family … but it just doesn’t make financial sense,” Cecil said. “It’s sad and unfortunate, but it’s the reality of continuing to be sustainable in agriculture. We have to be modernized and we have to be more efficient, and in order to do that sometimes we have to do things at a bigger scale.”

Still, Stile is optimistic about farming and said he continues to make improvements to his orchard in water efficiency. Many of the trees that didn’t produce almonds on Stile’s farm were already nearing their fruiting lifespan and will be replaced next year.

Stile said at the end of a work day, when the heaping pile of almond hulls at his facility are covered in shade, he likes to lie down and rest to cool off — and sometimes falls asleep.

“I practiced law in Seattle and decided one time I just wanted to come home and do what I did every summer vacation,” Stile said. “So now I’m on summer break all year round, and I’m glad I made the right decision.”

Kundali Bhagya Actor Manit Joura Gets Emotional On Losing 2 Flats In The Twin Tower Demolition, Says “It Was Our Right To…”