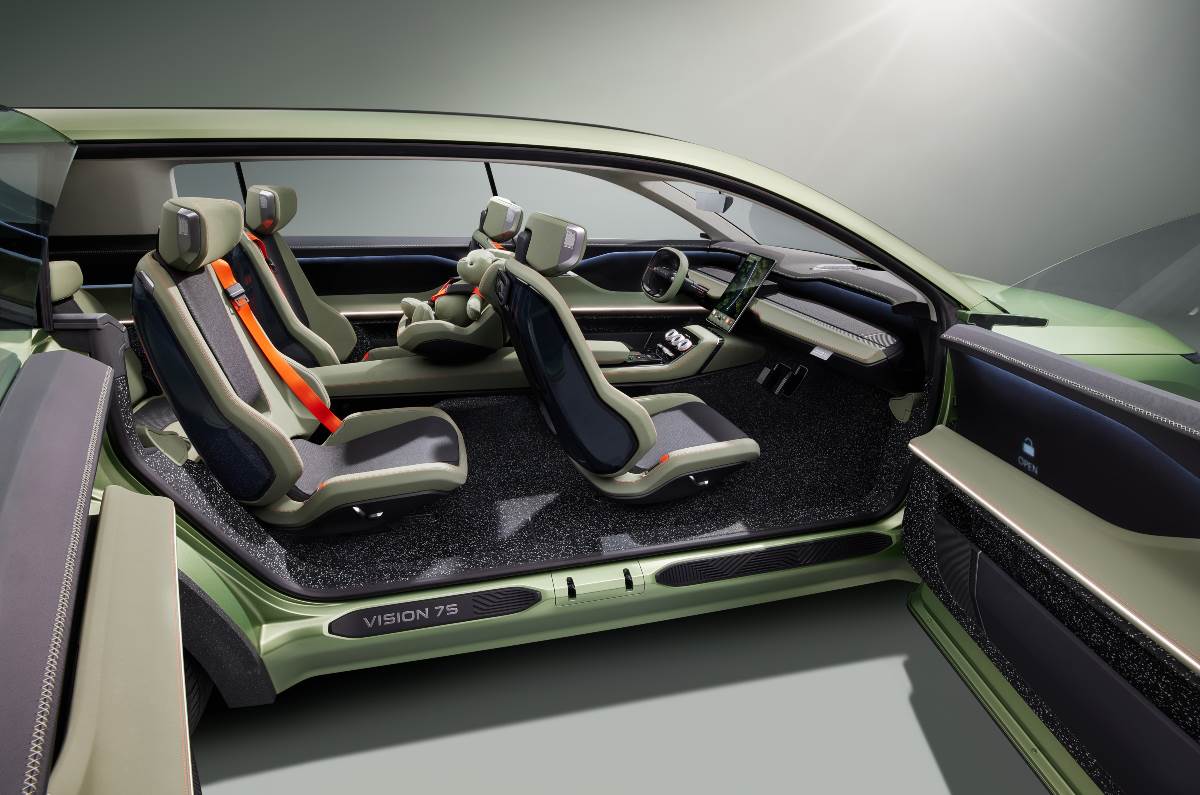 Production-spec Skoda SUV based on the Skoda Vision 7S concept will be out by 2026.

Skoda has unveiled the Vision 7S, its all-electric, 7-seater SUV concept. The concept previews many firsts for Skoda, including its new logo and the Modern Solid design language, with a 7 seat SUV based on this concept making it to production by 2026.

Klaus Zellmer, who was recently appointed as CEO of Skoda, described the Vision 7S concept as an “entirely new” proposition for the Czech carmaker, as it showcases a radical new design language referred to as ‘Modern Solid’. The design language features strong vertical elements, curved surfaces and minimal cuts and creases. This is a departure from Skoda’s current designs, which have a myriad of folds and cuts, and make the cars difficult and expensive to produce.

Another thing that’s new is the face of new Skoda cars – the new nose is devoid of a traditional grille or frame. The lack of a formal grille in the design language has been done to make it ready for the electrified or electric age, where a large opening in the bonnet – where an engine would have sat – is not strictly required.

Oliver Stefani, Skoda’s head of design, confirms this: “The ribs and frame of the grille have been done away with to make the design language ready for the electric age.” Along with the new ‘grille’, upcoming Skodas will also get interestingly detailed T-shaped headlights and tail-lights. You can almost imagine the new nose on the next-gen Octavia, Superb or even Slavia, and, in truth, they would work extremely well and lend these cars a modern air.

Skoda also previewed a new look for the cabin, where the new steering wheel and central boss design is oval in shape, the interiors are clean and devoid of buttons, and the Vision 7S also previews a large central touchscreen that can either be used in portrait or landscape position. The most interesting bit, however, is the position of the central rear-facing child seat – positioned in what traditionally forms a blank space. Skoda would say it’s simply clever.

The Vision 7S concept has a claimed WLTP range of over 600km, courtesy of an 89kWh battery that can be charged at speeds of up to 200kW. The production version of this concept will be among the final models from the Volkswagen Group to use the modular MEB platform, which will be phased out from 2025, before the switch to the Scalable Systems Platform (SSP) architecture. The new 7-seater EV SUV will effectively serve as the electric alternative to the Skoda Kodiaq, and as per our sources, it may sit higher in the model line-up.

Skoda recently imported a few units of the Enyaq iV SUV in India for testing, and the company aims to launch it in India sometime next year as a fully imported unit.

What to watch during Hispanic Heritage Month

Latest Marvel News: As one of the studio’s Disney Plus…

What Jair Bolsonaro did to the Amazon rainforest, in 2…

One Piece: When did it start?