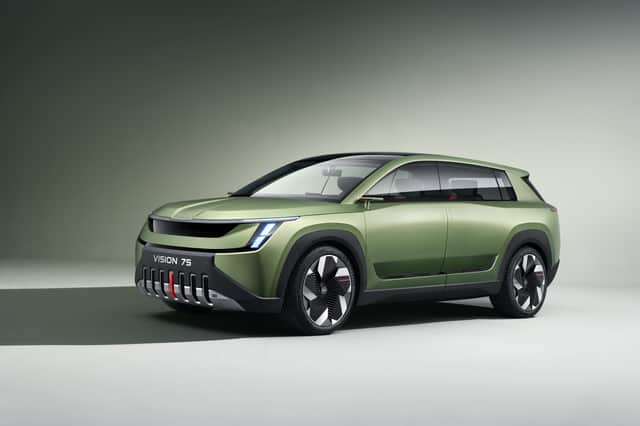 Skoda has revealed the first hints of how its planned seven-seater EV could look with its Vision 7S concept car.

The concept model was unveiled in Prague as the Czech brand revealed details about its new design direction and expansion of its all-electric line-up, including plans to launch three new EVs by 2026.

Although the 7S is a concept, Skoda has said it is a specific preview of a future EV model and has confirmed it will launch a seven-seat EV before 2026, so we can expect to see much of the 7S translated to the future roadgoing model, potentially including a 370-mile range and 200kW charging.

The large SUV-styled model will be the brand’s flagship model when it launches and the Vision 7S embodies the new “modern solid” design direction, with fewer, simpler lines intended to reflect principles of “robustness, functionality and authenticity” and a bold new “Tech-Deck Face”.

The Tech-Deck Face develops the grille design of Skoda’s first EV – the Enyaq – further, pointing to the brand’s all-electric future. It is flatter and wider than previous models and the upright grilles have been replaced with darkened glass behind which are the car’s various ADAS sensors.

The Skoda badge has been replaced with the brand’s name spelled out in a new font, which sits above a full-width light bar that runs along the bonnet line and extends out to the daytime running lights. These form the upper part of a T-shaped lighting array about quad LED headlights. Beneath the new grille, seven cooling ducts are set into a bumper made from recycled tyres while 22-inch alloys sit within sharply squared off arches also lined with ex-tyres.

We’re unlikely to see the 7S’s rear-hinged doors on the final road model but the camera wing mirrors and flush-fitting vertical door handles could well make it to production, as could the pronounced roof spoiler and illuminated tailgate script.

The minimalist interior plays heavily on Skoda’s plans for a more digital interface and sustainable materials. Recycled tyres make another appearance – this time in the vehicle’s floor – while elsewhere the cabin upholstery is from sustainable sources and is a mix of artificial leather and recycled polyester yarns. At the centre of the dashboard is a 14.6-inch touchscreen mounted vertically, as in the Ford Mustang Mach-e. This is supplemented by an 8.8-inch digital instrument cluster, augmented reality head-up display and – joy of joys – three physical rotary dials for climate and other key controls.

Unlike regular seven-seaters, the 7S features three rows of two seats with a seventh, rear-facing child seat integrated into the very centre of the car, which the brand says is the safest place for the smallest passengers to travel. It’s likely that any production version will feature the more traditional 2-3-2 configuration.

In recognition of the time spent charging EVs, the Vision 7S features two modes – driving and relaxing. In the latter, the seats slide back and recline and the centre screen slides up and flips to a horizontal plane to be used as an entertainment display for TV/films or gaming.

Skoda has long been famous for its simply clever features and the Vision 7S is no different, with magnetic smartphone mounts in the centre console and seat backs, magnetic surfaces where metal Skoda drinks bottles or a first-aid kit can be secured and neat backpacks that are magnetically attached to the seat backrests.

While we’re a long way from technical specifications for any production model, it seems likely that the Vision 7S is a hint of what’s to come from Skoda’s electric line-up. With an 89kWh battery, the Vision 7S has a claimed maximum range of 370 miles and features ultra-rapid 200kW charging, almost twice as quick as the current Enyaq.

The production version of the Vision 7S is likely to eventually replace the Kodiaq seven-seat SUV and is one of three all-electric models promised by Skoda by 2026.

Skoda’s CEO Klaus Zellmer, said: “With the Vision 7S concept study, we’re giving a specific preview of an entirely new Skoda model that will round off the top end of our product portfolio and customer base.

“Also, we’re significantly accelerating our e-campaign and will be launching three additional all-electric models by 2026, with more in the pipeline. This will put us in an even stronger position for the decade of transformation.

“In addition, we’ll be investing a total of €5.6 billion in e-mobility and a further €700 million in digitalisation over the next five years.”

Metro mother looks to move on after finally receiving settlement