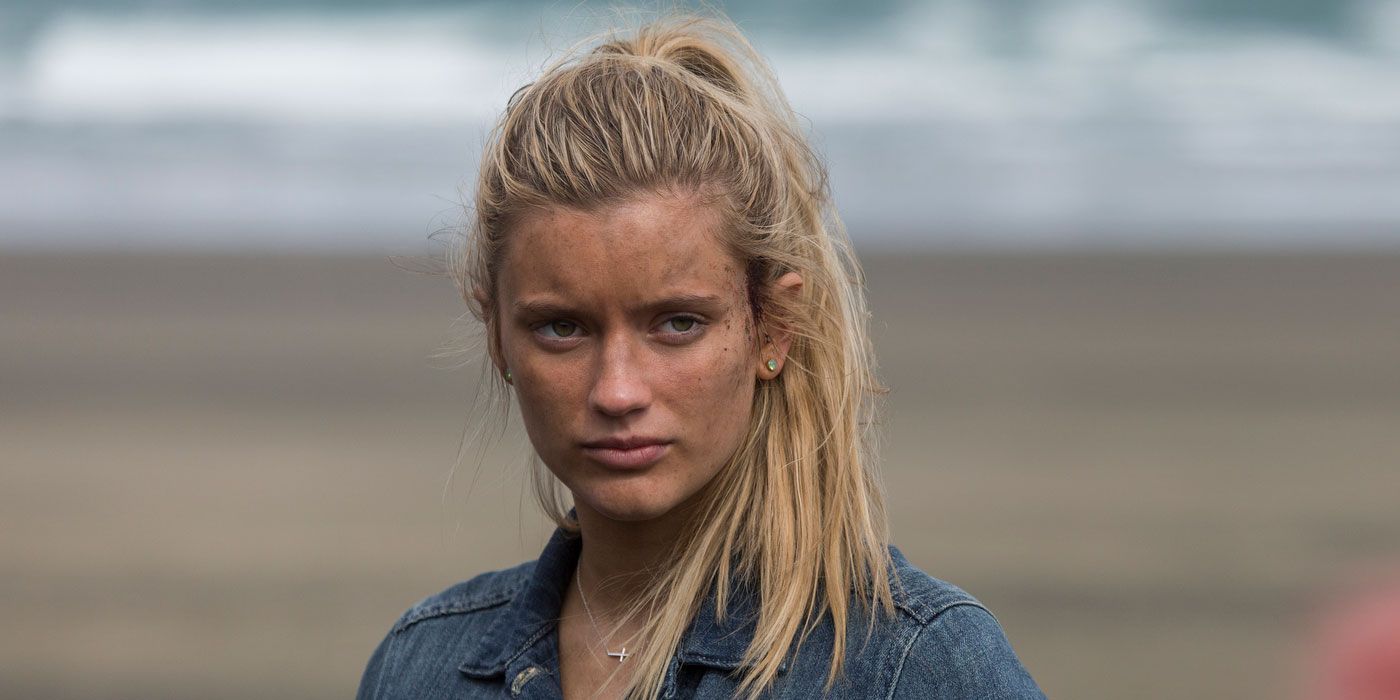 Healey also addresses the behind the scenes requirements for Shelby’s teeth.

There’s a lot to love about every single character in the new Amazon Prime series, The Wilds, but Mia Healey’s Shelby Goodkind might be one of the most complex of the bunch. Not only does Episode 8, “Day Sixteen,” reveal Shelby’s drastically different post-island look, but it also takes us back to her home life, highlighting an especially pivotal and devastating experience that no doubt continues to weigh heavy on Shelby’s head and heart. While we are given answers throughout, by the end of Season 1, there’s question upon question about how Shelby’s managing that grief, how she plans to move forward from here and if she’s got some sort of plan brewing to break out of the facility. But, it seems as though two of the most popular burning questions out there pertain to behind-the-scenes details; did Healey really shave her head for the role and does she use a flipper?

Healey recently took the time to join us for an episode of Collider Ladies Night to discuss her journey from her earliest inspirations to scoring the role of Shelby on The Wilds. You can bet we spoke about Shelby’s relationship with Toni (Erana James), the cast chemistry and Healey’s hopes for Season 2, but right now we’re putting the questions about Healey’s hair and teeth to bed. No, Healey didn’t really shave her head for the role, but that doesn’t mean she wouldn’t be willing do it! Here’s what she had to say about that and the process of being fitted for a bald cap:

“The bald cap was one of the coolest things I’ve ever done. I was walking around and I was like, ‘I’m gonna shave my head.’ If they wanted me to shave my head for Season 2 for the whole time, I would do it. It was so cool. A long time in hair and makeup. They actually flew me to Sydney, which is where I’m from which was great, so I got to say hi to mom and dad. But they flew me to Sydney to do a cast over my head. I actually have a photo of it on my Instagram. And that’s something that was really hard for me because it’s kind of claustrophobic. You’re completely covered in this silicon, I don’t even know what it is, that creates a mold of your entire head to chest. And you’re in there for like 20 minutes trying to breathe through these tiny little holes, which was hard but it was fun. It was a lot of fun. They are so good at their job the people that work there, so it was great. Then they made a bald cap from that shape of my head and then added each individual hair onto it. Like every single hair on there was put in one by one. Amazing. Then when we were doing it, I was in hair and makeup for like four and a half, five hours getting it on then blending it in with my skin. I wasn’t able to eat breakfast or anything because you can’t chew with it on, so it was hard but it was so much fun. I just loved walking around in it. It was great.”

From there, Healey addressed Shelby’s teeth. As revealed early on in the show, Shelby uses a flipper, a removable denture, to replace two missing teeth. Again, no, Healey doesn’t really use a denture, but the curiosity there does speak to the level of talent behind the lens when it comes to selling such a visual element. Healey broke down how they managed to pull that off:

“The flipper, they just put two little dots on my teeth through the camera. Not on my actual teeth and just in post [production], edited them out, which is amazing because even when I’m moving and talking they were just going shot by shot, frame by frame and removing those teeth which is really cool. And then I had a flipper that had the teeth on it and then a flipper that didn’t have the teeth on it so I had something to click in and something to click out. But they were two different things so every time I was like, ‘Okay, we have to have the flipper in the shot because she’s already taken it out,’ so I have the one with the teeth on it and then they cut and then I have to [have] the one with no teeth on it so I can click it in, because I actually have teeth there so I couldn’t click in a proper one. So it was very stop/starting, but by the end of Season 1, everyone was so used to the process and they were like, ‘Okay,’ and we were all pros at it and we just knew exactly what to do.”

If you’re looking for even more The Wilds talk from Healey, you’re in luck! Not only will we have another clip to share with you very soon, but later this week, we’ll have the full Collider Ladies Night extended interview available in video and podcast form.

The vicious rapist and killer isn’t even named until the end of the penultimate episode.