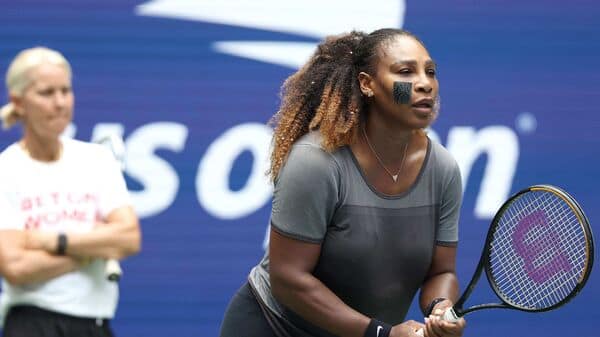 Serena Williams, 23-time Grand Slam winner and an inspiration for millions across the globe, is all set to bid an emotional farewell to professional tennis. After announcing earlier this month that the countdown to her retirement had begun, Williams is about face to Montenegro’s Danka Kovinic at Arthur Ashe Stadium on Monday in what could be her final appearance.

The 40-year-old sporting and cultural icon won the first of her Grand Slam titles at the same venue in 1999 as a 17-year-old prodigy.

According to the New York Times, Williams will wear a sparkling black bodice with a skirt comprised of six layers — one for every US Open title she has won. Whether Williams is able to extend her US Open campaign beyond that match remains to be seen.

“Olympia doesn’t like when I play tennis,” Williams told Time magazine adding “…It’s hard to completely commit when your flesh and blood is saying, Aw.”

But bidding farewell to tennis isn’t the end of her story. Williams has thought about what’s next, however, she is still unaware of how she feels about it.

She clarified she will re-direct her curiosity and drive into her investment firm, Serena Ventures. She’ll kindle her spiritual life. She’ll evolve as a mom. “I think I’m good at it,” she says of parenthood. “But I want to explore if I can be great at it.”

Speaking about her next, i.e. Serena Ventures, she told Vogue earlier this month, that the investment firm has now funded 16 companies valued at $1 billion or more, and that 78 percent of its portfolio are companies started by women or people of color.

“I kind of understood … that someone who looks like me needs to start writing the big checks,” Williams wrote. “Sometimes like attracts like. Men are writing those big checks to one another, and in order for us to change that, more people who look like me need to be in that position, giving money back to themselves.”

Not the end of Williams

Cut to tennis. Win or lose on Monday, Williams won’t be departing the US Open stage immediately.

On Saturday, organisers confirmed that she and elder sister Venus Williams had been given a wild card into the women’s doubles tournament, which starts on Wednesday.

Even then it remains unclear whether Williams will definitively call time on her career after her US Open campaign ends.

In an interview with NBC’s Today show on Friday, Williams declined to confirm that she would retire in New York — and would not even rule out playing into 2023.

“I think so, but who knows?” she told NBC when asked if she would retire.

Asked if she could possibly play next year’s Australian Open, she replied: “I don’t think so”, but added: “You never know. I’ve learned in my career, never say never.”

Denial of responsibility! My droll is an automatic aggregator of the all world’s media. In each content, the hyperlink to the primary source is specified. All trademarks belong to their rightful owners, all materials to their authors. If you are the owner of the content and do not want us to publish your materials, please contact us by email – [email protected]. The content will be deleted within 24 hours.
be blackbeyonce gatorade adbutts are okayserena beyonce gatoradeserena williamsserena williams net worthSerena Williams retirementUS Open
0
Share