‘Sense of status’: Kate & William prepare George for future role by having ‘faith’ in him 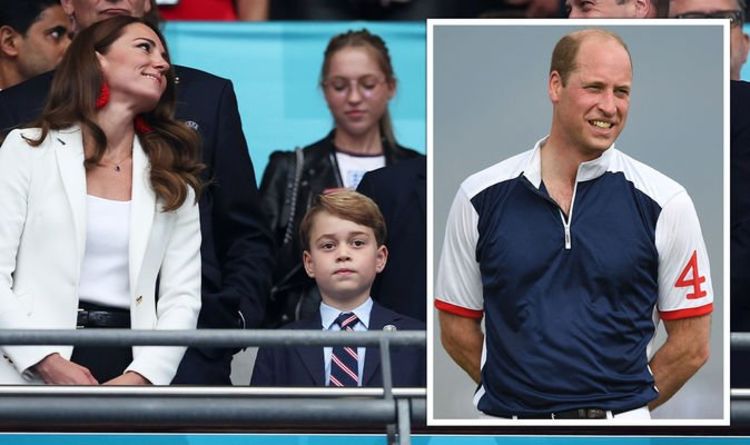 “There was a strong sense of sharing between the three of them but the more supportive gestures were offered via some affectionate tie-signs, rather than imposed.

“William placing his two huge ‘dad’ hands onto George’s shoulders towards the end would have felt strong and comforting, a signal for them all to adopt a more stoic, royal look than to show open upset and disappointment.”

When speaking to George, Charlotte and Louis, Kate and William can often be seen bending down so that they are eye-level with the royal children.

The expert went on: “Kate and William tended to approach their son rather than the other way around and again this will help increase his feelings of importance and confidence.

“William bends to his son to give information about the game and his pointing gestures suggest guidance.

“Kate also bends to speak to George, who keeps his eyes on the pitch in front.”

Analysing pictures throughout the game, the expert explained that the body language between the family appeared to be “boosting” George’s “existing confidence” and “sense of status” within the family.

Judi added: “There are also hints that they are building his social confidence in preparation for his future role as King.

Friendship as Seen Through the Lens of Bollywood

Here are 10 Ways to Celebrate the Event

“Royal appearances frequently  involve standing on balconies looking down at large crowds and although the crowd wasn’t there to royal-watch at the Euros final, it would have been a great way to build inner confidence via gradual familiarity with the role.

“Many parents tend to hover or watch anxiously once the body language ‘stabilisers’ begin to be removed in this way but Kate and William appeared to provide a relaxed hands-off approach, standing back and only moving forward and inward to provide information or a few words of chat.

“When the three posed in this royal line-up there was a visual image of equality.

“Their body language behaviours tend to imply that William is a responsible and thoughtful boy who they have confidence in themselves.

“The decision to allow him to stand at the rail alone in this way must reflect the faith they have in him and the faith he must have in them too.”