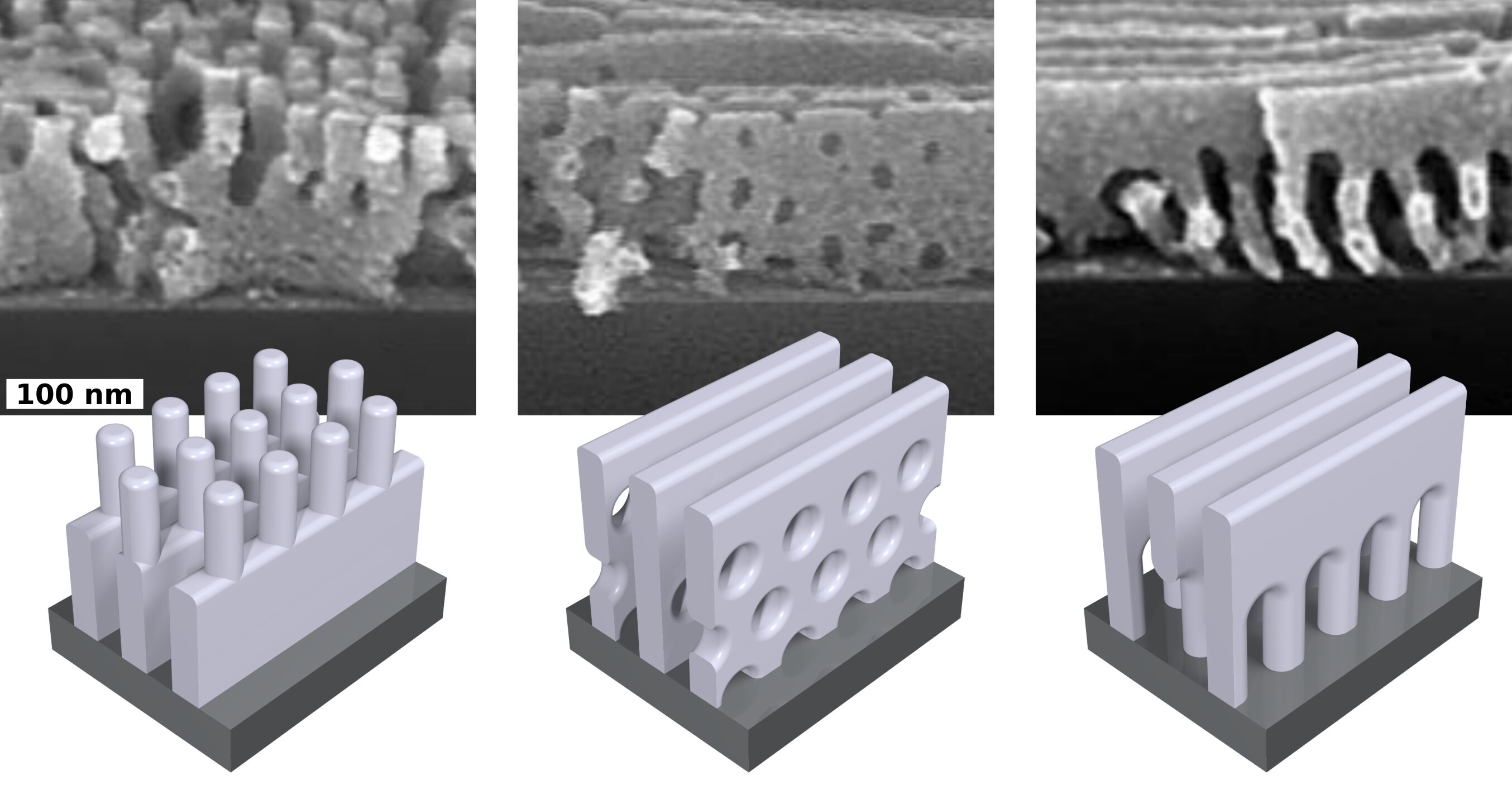 Scientists at the U.S. Department of Energy’s (DOE) Brookhaven National Laboratory have developed a new way to guide the self-assembly of a wide range of novel nanoscale structures using simple polymers as starting materials. Under the electron microscope, these nanometer-scale structures look like tiny Lego building blocks, including parapets for miniature medieval castles and Roman aqueducts. But rather than building fanciful microscopic fiefdoms, the scientists are exploring how these novel shapes might affect a material’s functions.

The team from Brookhaven Lab’s Center for Functional Nanomaterials (CFN) describes their novel approach to control self-assembly in a paper just published in Nature Communications. A preliminary analysis shows that different shapes have dramatically different electrical conductivity. The work could help guide the design of custom surface coatings with tailored optical, electronic, and mechanical properties for use in sensors, batteries, filters, and more.

“This work opens the door to a wide range of possible applications and opportunities for scientists from academia and industry to partner with experts at CFN,” said Kevin Yager, leader of the project and CFN’s Electronic Nanomaterials group. “Scientists interested in studying optical coatings, or electrodes for batteries, or solar cell designs could tell us what properties they need, and we can select just the right structure from our library of exotic shaped materials to meet their needs.”

To make the exotic materials, the team relied on two areas of longstanding expertise at CFN. First is the self-assembly of materials called block copolymers—including how various forms of processing affect the organization and rearrangement of these molecules. Second is a method called infiltration synthesis, which replaces rearranged polymer molecules with metals or other materials to make the shapes functional—and easy to visualize in three dimensions using a scanning electron microscope.

“Self-assembly is a really beautiful way to make structures,” Yager said. “You design the molecules, and the molecules spontaneously organize into the desired structure.”

In its simplest form, the process starts by depositing thin films of long chainlike molecules called block copolymers onto a substrate. The two ends of these block copolymers are chemically distinct and want to separate from each other, like oil and water. When you heat these films through a process called annealing, the copolymer’s two ends rearrange to move as far apart as possible while still being connected. This spontaneous reorganization of chains thus creates a new structure with two chemically distinct domains.

Scientists then infuse one of the domains with a metal or other substance to make a replica of its shape, and completely burn away the original material. The result: a shaped piece of metal or oxide with dimensions measuring mere billionths of a meter that could be useful for semiconductors, transistors, or sensors.

“It’s a powerful and scalable technique. You can easily cover large areas with these materials,” Yager said. “But the disadvantage is that this process tends to form only simple shapes—flat sheetlike layers called lamellae or nanoscale cylinders.”

Scientists have tried different strategies to go beyond those simple arrangements. Some have experimented with more complex branching polymers. Others have used microfabrication methods to create a substrate with tiny posts or channels that guide where the polymers can go. But making more complex materials and the tools and templates for guiding nano-assembly can be both labor-intensive and expensive.

“What we’re trying to show is that there’s an alternative where you can still use simple, cheap starting materials, but get really interesting, exotic structures,” Yager said.

“We take two of the materials that naturally want to form very different structures and literally put them on top of one another,” Yager said. By varying the order and thickness of the layers, their chemical composition, and a range of other variables including annealing times and temperatures, the scientists generated more than a dozen exotic nanoscale structures that haven’t been seen before.

“We discovered that the two materials don’t really want to be stratified. As they anneal, they want to mix,” Yager said. “The mixing is causing more interesting new structures to form.”

If annealing is allowed to progress to completion, the layers will eventually evolve to form a stable structure. But by stopping the annealing process at various times and cooling the material rapidly, quenching it, “you can pull out transient structures and get some other interesting shapes,” Yager said.

Scanning electron microscope images revealed that some structures, like the “parapets” and “aqueducts,” have composite features derived from the order and reconfiguration preferences of the stacked copolymers. Others have crisscross patterns or lamellae with a patchwork of holes that are unlike either of the starting materials’ preferred configurations—or any other self-assembled materials.

Through detailed studies exploring imaginative combinations of existing materials and investigating their “processing history,” the CFN scientists generated a set of design principles that explain and predict what structure is going to form under a certain set of conditions. They used computer-based molecular dynamics simulations to get a deeper understanding of how the molecules behave.

“These simulations let us see where the individual polymer chains are going as they rearrange,” Yager said.

And, of course, the scientists are thinking about how these unique materials might be useful. A material with holes might work as a membrane for filtration or catalysis; one with parapet-like pillars on top could potentially be a sensor because of its large surface area and electronic connectivity, Yager suggested.

“It’s the same starting molecules, and we’re converting them all into zinc oxide. The only difference between one and the other is how they’re locally connected to each other at the nanoscale,” Yager said. “And that turns out to make a huge difference in the final material’s electrical properties. In a sensor or an electrode for a battery, that would be very important.”

The scientists are now exploring the different shapes’ mechanical properties.

“The next frontier is multifunctionality,” Yager said. “Now that we have access to these nice structures, how can we choose one that maximizes one property and minimizes another—or maximizes both or minimizes both, if that’s what we want.”

“With this approach, we have a lot of control,” Yager said. “We can control what the structure is (using this newly developed method), and also what material it is made of (using our infiltration synthesis expertise). We look forward to working with CFN users on where this approach can lead.”

Twitter may only last weeks, and Meta’s unforced AI error

Tesla Model 3 refresh coming with even more controls via the…

A Psychological Horror Sensation Prays to the Steaming Gods…