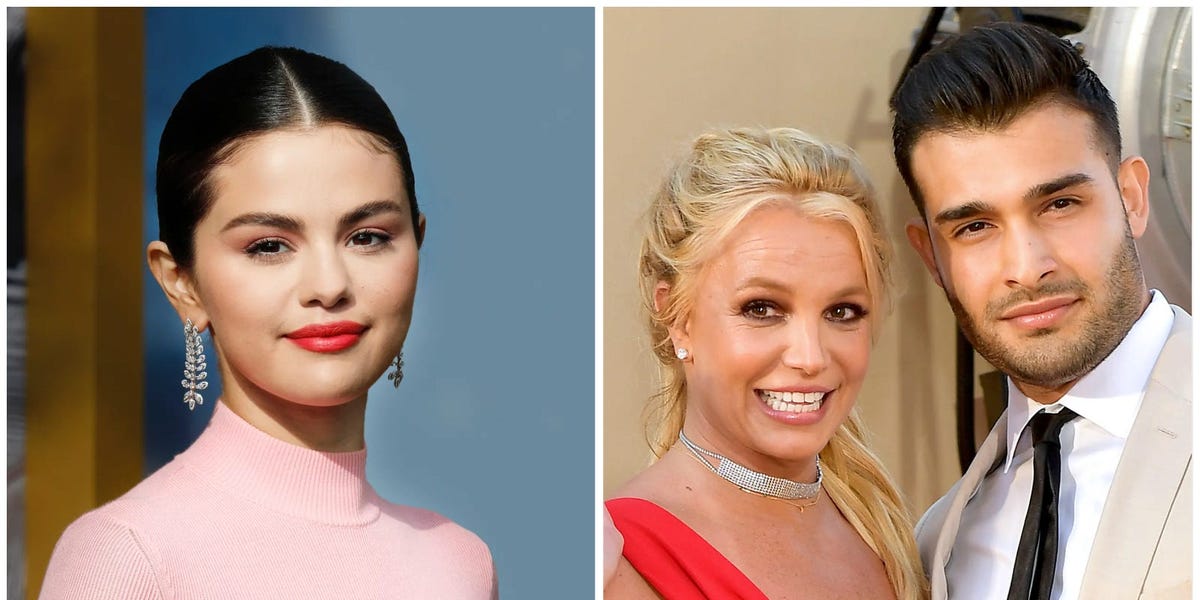 Selena Gomez spoke about her experience at Britney Spears’ star-studded wedding during an appearance on “Jimmy Kimmel Live” Thursday.

After nearly six years of dating, Spears got married to her long-time boyfriend Sam Asghari at her home in Thousand Oaks, California, last week. While Spears’ own family did not attend the wedding, the event was filled with celebrity guests — Gomez included.

During an appearance on “Kimmel” to promote the second season of “Only Murders in the Building,” Gomez was grilled by the host about the event.

“I am really happy for her. It was beautiful,” Gomez said after Kimmel showed a photo of the former Disney star with Spears, Madonna, Paris Hilton, Drew Barrymore, and fashion designer Donatella Versace.

Kimmel then asked: “What kind of food did they serve at the wedding? Was it a buffet or was it a sitdown deal? Did they do that thing where they pin money to the bride’s dress and then her dad comes in and yanks it off her and runs?”

Gomez laughed and then replied: “No, there’s finger foods.”

Gomez’s “Only Murders” co-star Martin Short admitted that he would love to meet Madonna.

In September 2021, Spears and Asghari got engaged after nearly six years together. The pair met on the set of Spears’ “Slumber Party” music video in 2016.

In June 2021, Spears testified that the conservatorship she was put under by her family meant she was not able to “get married or have a baby.”

The conservatorship was eventually terminated in November after a Los Angeles judge ruled in favor of her plea.

She has continued to feud with her family, particularly her sister Jamie Lynn, over the years-long conservatorship.

Earlier this week, Spears disputed reports that she had invited her brother Bryan to her wedding because of the way he treated her during her conservatorship.

“None of you ever wanted it to end because you all loved telling me what to do and treating me like absolutely nothing,” she wrote in a now-deleted Instagram post.

Both Jamie Lynn and her mother Lynne have publicly supported the singer’s wedding.