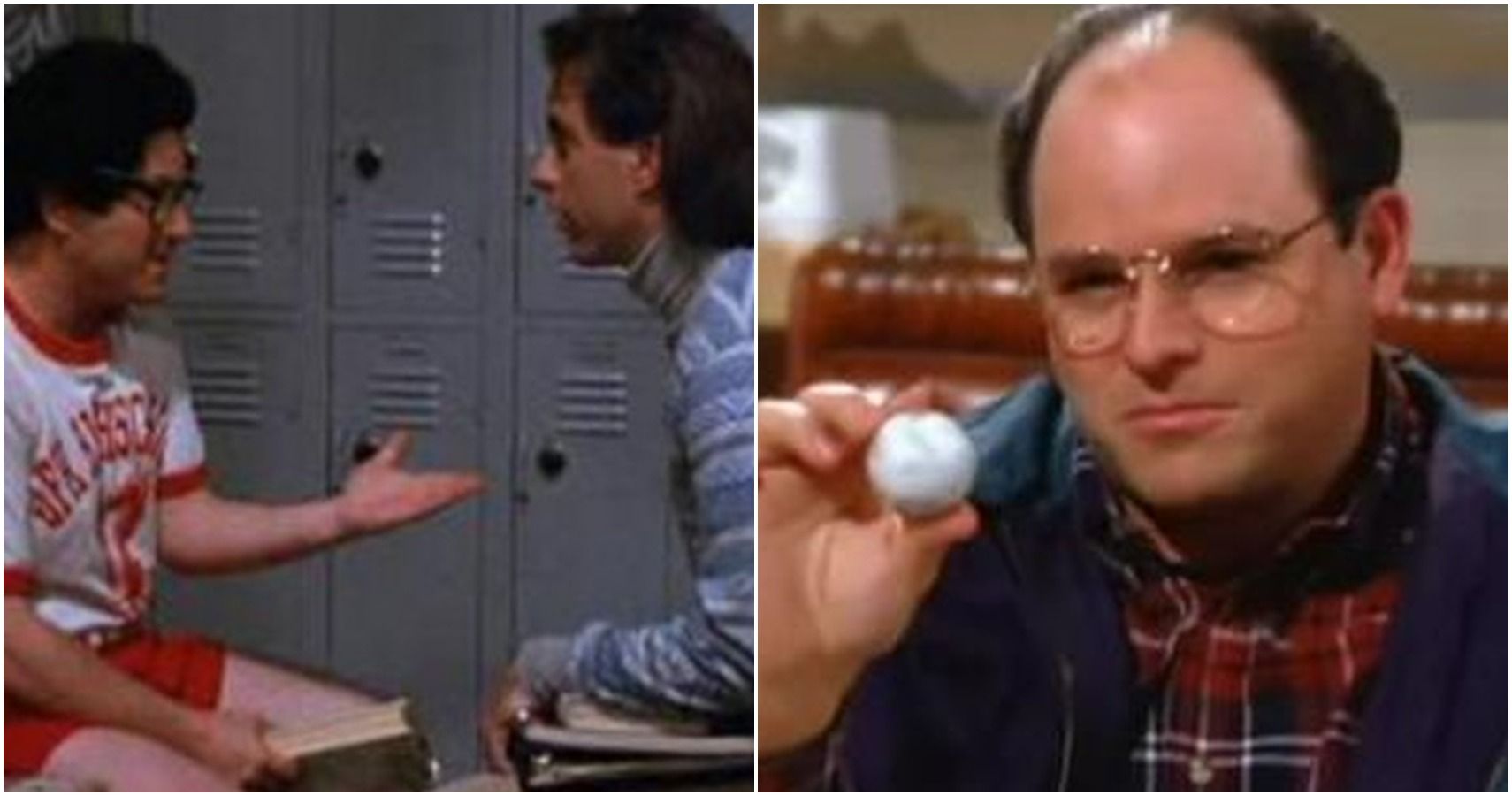 George Costanza is one of the main characters of Seinfeld, having been best friends with Jerry since the two were kids. He was known for his neurotic tendencies, his lies that turned so ridiculous they couldn’t possibly be true, and his wild stories, like that of the one he told in “The Marine Biologist.”

George struggled both in his career and in his love life, and unfortunately, he didn’t seem to learn from his mistakes. His lies were often sad, but so were certain elements of his childhood, including his parents and former gym teacher, which may explain why George became the person he did.

10 Even When He Saved The Day, He Lost The Girl

George was concerned about his ability to fake being a marine biologist to impress his old crush, but he actually was able to save the day. He removed Kramer’s golf ball from the blowhole of a beached whale, but when he confessed to his crush afterward that he wasn’t actually a marine biologist, he lost her anyway.

He certainly deserved at least a little appreciation for helping the whale. Though it turned into a hilarious story, unfortunately, George lost his chance at love. Sometimes it seemed as if the world was against George.

9 He Was Pressured To Be Someone He Wasn’t

Lloyd Braun and George grew up together, and George’s mother would often badger him with the question, “Why can’t you be more like Lloyd Braun?”

It’s no secret that George’s family was dysfunctional, and it’s sad that his mother didn’t recognize George for his own merits. It’s actually ironic, considering Lloyd later was a disaster at selling computers in Frank Costanza’s business.

8 Tried Lying To A Doctor

Even after the doctor examined George, including X-rays, and determined that there is nothing physically wrong with him, George still has the nerve to tell the doctor he’s wrong. The doctor has a great response in telling George that someone trying to pull such a thing is obviously immature and has no regard for wasting other people’s time.

This doesn’t stop George from continuing to fight the doctor and act as though he’s in pain as he’s on his way out. George was determined to see it through, even though his lie was already beyond ridiculous and it made him look quite bad.

George was punched by Marisa Tomei after she finds out he’s engaged. He disgusts another woman with his less than proper table manners. He is dumped by Audrey after he can’t look at her due to the fact that she’s suffered a bad nose job. No matter who he meets, something always seems to happen that ensures George’s relationships don’t last long.

These relationships tend to end badly, and it’s sad that George, like with his lying in the workplace, never learns his lesson or tries to be better in his next relationship.

Estelle Costanza was the stereotypical domineering mother, and it’s no wonder George is as neurotic as he is because of it. His father Frank never really wanted George around, especially when George had to move back in with his parents when he fell on hard times.

If his mother wasn’t screaming at him, George was listening to her scream at his father. His parents were both dysfunctional, and it’s sad that he had to grow up in that kind of environment.

5 Doesn’t Have A Steady Career

George’s tendency to lie and cover things up usually costs him a lot of jobs. When all of these cover-ups fail, audiences would think he’d learn his lesson and remember it for his next job.

Unfortunately, George never does seem to learn. It’s no wonder he often ended up unemployed. It’s sad that George didn’t try harder to make wiser decisions and be more honest, if only to better his situation so he never would’ve had to return to his parents’ house.

4 His Gym Teacher Was A Bully

Mr. Heyman was the gym teacher when George and Jerry were in high school. Instead of referring to George by “Costanza,” he called him “Can’t stand ya.” He also encouraged the jocks to give him wedgies.

Teachers are meant to stop bullying, not be a bully themselves, especially in a time as tumultuous as high school. It’s tragic that George had to endure this kind of treatment, though he did, eventually, report his teacher.

3 He Was Usually Insecure

George wanted acknowledgment that he had paid for Elaine’s salad in “The Big Salad.” He even brought it up with her, and later annoyed his girlfriend because of it, as she had handed over the salad and, in George’s mind, took credit for it. He questioned his sexuality after being assigned a male masseuse in “The Note.”

There are several similar instances in which George has irrational fears or otherwise feels insecure about something to the point that he says something about it, which usually annoys his friends. George could have confidence (and could even be overly confident) from time to time, but it’s sad that he didn’t possess that confidence more often.

2 He Faked Having A Disability

George takes advantage wherever he can, but in this instance, he took things way too far. George temporarily uses a cane, but he preys on his new boss’s sympathy. The entire thing is wrong on so many levels, and George had it coming when he was eventually caught in his own warped lie.

It’s sad that George ever dared to do such a thing, to begin with, and that he took the resources for himself, instead of leaving them to people who really did need them.

1 His Entire Relationship With Susan

George always seemed to be wanting out of his relationship with Susan, despite the fact that she obviously cared for him. He even tried to get out of his engagement to her. Unfortunately, he does ultimately get out of the relationship when she dies after licking envelopes containing toxic adhesive.

When George first learns of her death, he doesn’t have much of a reaction. It’s tragic that George could be so cold and heartless, and that he couldn’t love her back the same way she loved him.

NEXT: Seinfeld: 5 Of The Main Characters’ Most Brilliant Schemes (& 5 That Were Doomed To Fail)


Next
James Bond: 10 Behind The Scenes Facts About On Her Majesty’s Secret Service

A Seattle native, Kacie has loved entertainment in the forms of books, films, television and music since day one. Inspired by a filmmaker relative, Kacie has been pursuing a career in the film and television industry in Los Angeles ever since. A graduate of The University of Arizona, Kacie has written for her college newspaper The Daily Wildcat, Harness Magazine, and now has added Screen Rant to her resume. She loves writing and all things pop culture.

Thailand Open: Satwik-Chirag lose, but on an upward curve after a long time away