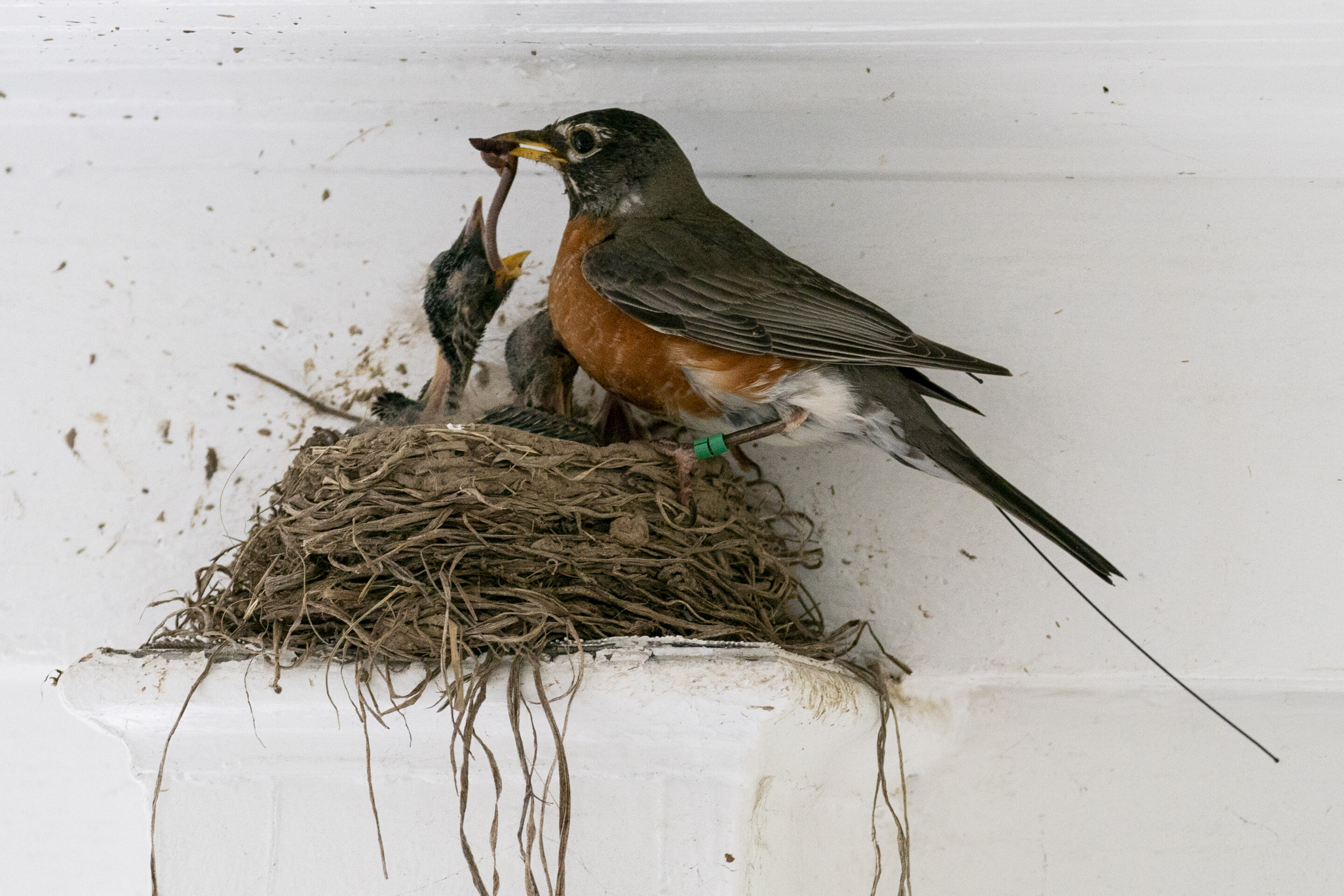 Use of PFAS in cosmetics ‘widespread,’ new study…

Sleep-friendlier lighting is on the way

A plump robin wearing a tiny metal backpack with an antenna hops around a suburban yard in Takoma Park, then plucks a cicada from the ground for a snack.

Ecologist Emily Williams watches through binoculars from behind a bush. On this clear spring day, she’s snooping on his dating life. “Now I’m watching to see whether he’s found a mate,” she said, scrutinizing his interactions with another robin in a nearby tree.

Once the bird moves on at season’s end, she’ll rely on the backpack to beam frequent location data to the Argos satellite, then back to Williams’ laptop, to track it.

The goal is to unravel why some American robins migrate long distances, but others do not. With more precise information about nesting success and conditions in breeding and wintering grounds, “we should be able to tell the relative roles of genetics versus the environment in shaping why birds migrate,” said Williams, who is based at Georgetown University.

Putting beacons on birds is not novel. But a new antenna on the International Space Station and receptors on the Argos satellite, plus the shrinking size of tracking chips and batteries, are allowing scientists to remotely monitor songbird movements in much greater detail than ever before.

“We’re in a sort of golden age for bird research,” said Adriaan Dokter, an ecologist at Cornell University who is not directly involved with Williams’ study. “It’s pretty amazing that we can satellite-track a robin with smaller and smaller chips. Ten years ago, that was unthinkable.”

The device this robin is wearing can give precise locations, within about 30 feet (about 10 meters), instead of around 125 miles (200 kilometers) for previous generations of tags.

That means Williams can tell not only whether the bird is still in the city, but on which street or backyard. Or whether it’s flown from the Washington, D.C., suburbs to land on the White House lawn.

A second new tag, for only the heaviest robins, includes an accelerometer to provide information about the bird’s movements; future versions may also measure humidity and barometric pressure. These Icarus tags work with a new antenna on the International Space Station.

That antenna was first turned on about two years ago, “but there were some glitches with the power-supply and the computer, so we had to bring it down again with a Russian rocket, then transport it from Moscow to Germany to fix it,” said Martin Wikelski, director of the Max Planck Institute of Animal Behavior, whose scientific team is honing the technology. After “the usual troubleshooting for space science,” the antenna was turned back on this spring.

As researchers deploy precision tags, Wikelski envisions the development of “an ‘Internet of animals’—a collection of sensors around the world giving us a better picture of the movement of life on the planet.”

The American robin is an iconic songbird in North America, its bright chirp a harbinger of spring. Yet its migratory habits remain a bit mysterious to scientists.

“It’s astounding how little we know about some of the most common songbirds,” said Ken Rosenberg, a conservation scientist at Cornell University. “We have a general idea of migration, a range map, but that’s really just a broad impression.”

An earlier study Williams worked on showed some robins are long-distance migrants—flying more than 2,780 miles (4,480 km) between their breeding area in Alaska and winter grounds in Texas—while others hop around a single backyard most of the year.

What factors drive some robins to migrate, while others don’t? Does it have to do with available food, temperature fluctuations or success in mating and rearing chicks?

Williams hopes more detailed data from satellite tags, combined with records of nesting success, will provide insights, and she’s working with partners who are tagging robins in Alaska, Indiana and Florida for a three-year study.

Scientists have previously put GPS-tracking devices on larger raptors, but the technology has only recently become small and light enough for some songbirds. Tracking devices must be less than 5% of the animal’s weight to avoid encumbering them.

In a Silver Spring, Maryland, yard, Williams has unfurled nylon nets between tall aluminum poles. When a robin flies into the net, she delicately untangles the bird. Then she holds it in a “bander’s grip”—with her forefinger and middle finger loosely on either side of the bird’s neck, and another two fingers around its body.

On a tarp, she measures the robin’s beak length, takes a toenail clipping and plucks a tail feather to gauge overall health.

Then she weighs the bird in a small cup on a scale. This one is about 80 grams, just over the threshold for wearing the penny-sized Argos satellite tag.

Williams fashions a makeshift saddle with clear jewelry cord looped around each of the bird’s legs. She then tightens the cord so the tag sits firmly on the bird’s back.

When she opens her hand, the robin hops to the ground, then takes a few steps under a pink azalea shrub before flying off.

In addition to providing very precise locations, the satellite tags transmit data that can be downloaded from afar onto Williams’ laptop. The data on older tags couldn’t be retrieved unless the same bird was recaptured the following year—a difficult and uncertain task.

“It is detective work to try to figure out why a population is declining,” said Ben Freeman, a biologist at the Biodiversity Research Centre at the University of British Columbia. Better information about migration corridors “will help us look in the right places.”

A 2019 study co-written by Cornell’s Rosenberg showed that North America’s population of wild birds declined by nearly 30%, or 3 billion, since 1970.

He said tracking birds will help explain why: “Where in their annual cycles do migratory birds face the greatest threats? Is it exposure to pesticides in Mexico, the clearing of rainforests in Brazil, or is it what people are doing in their backyards here in the U.S.?”

Xiaomi: Xiaomi teases accessory for Mi TVs in India, could be webcam