Sales VP Mistakes Engineer For His Own Employee, Demands He Wears White, Ends Up Making A Fool Of Himself 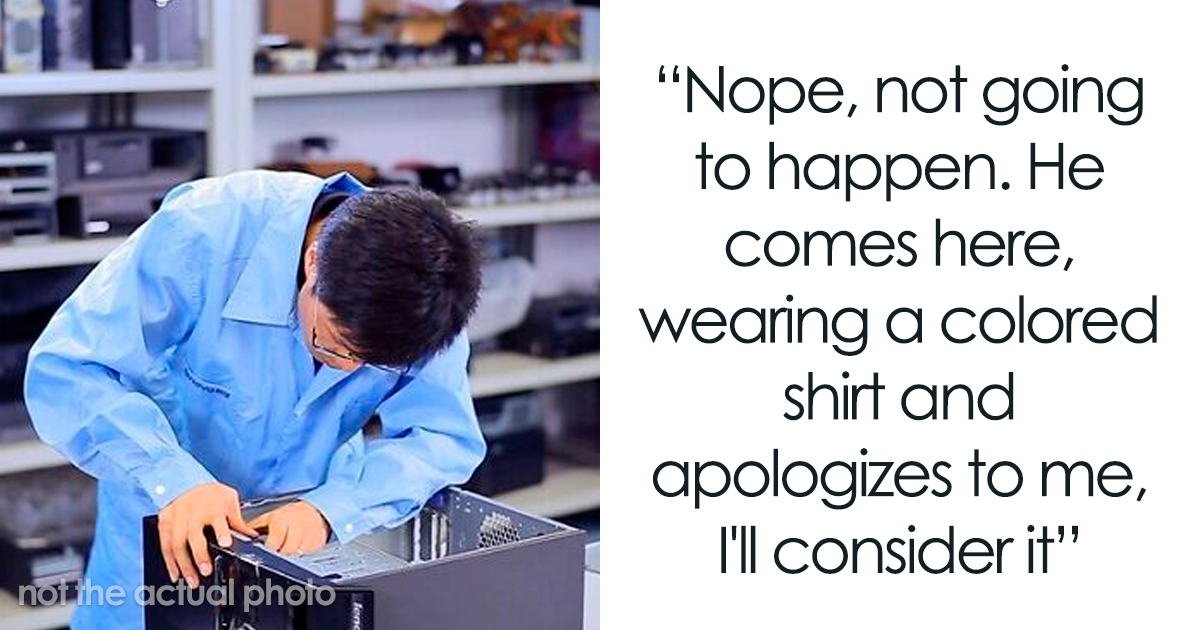 Having been on the internet for a while, you’ll know that malicious compliance is the best kind of compliance. At the very least, it’s the most entertaining type and one that definitely questions social norms, rules and other constructs of standardization.

Reddit user u/kilterturtle, who we’ll simply refer to as Kilted, has recently shared a story of malicious compliance where he refused to follow the crowd of “droids,” i.e. sales people, in wearing a white shirt instead of whatever else that was more practical and convenient for him.

Ever been bugged over your attire at work? Like, seriously told not to return without wearing ‘this’ and ‘that’?

So, a few decades back, Kilted used to work as an engineer at a large mainframe network gear company. While he did travel and attend meetings in all of their formal glory, it was mostly work in computer rooms, so appropriate attire was a given.

Now there comes a time where he had to travel outside the office to work with what he calls a “sales droid”—Kilted’s term for a salesperson. However, instead of the usual fixing, he was also asked to partake in a mandatory sales meeting.

Well, Reddit user u/KiltedTurtle was, and, you know what, he came back with some devilishly malicious compliance 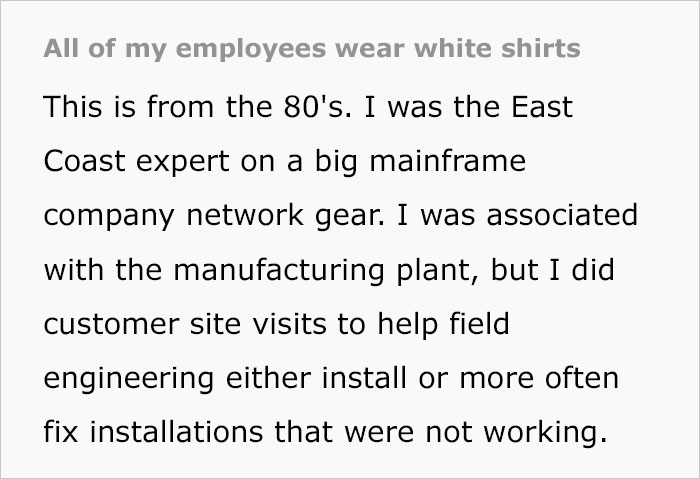 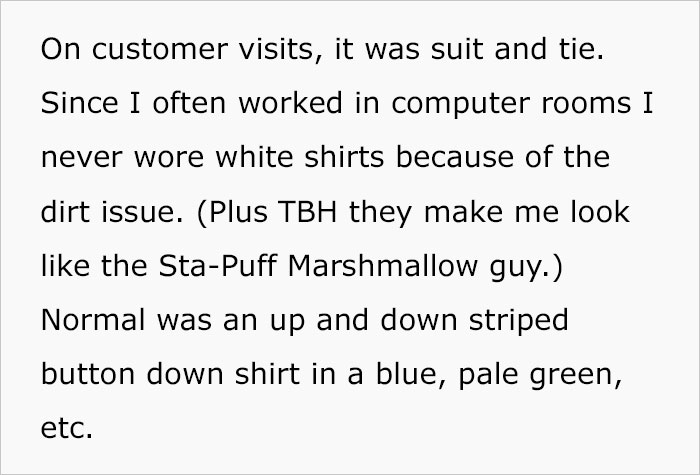 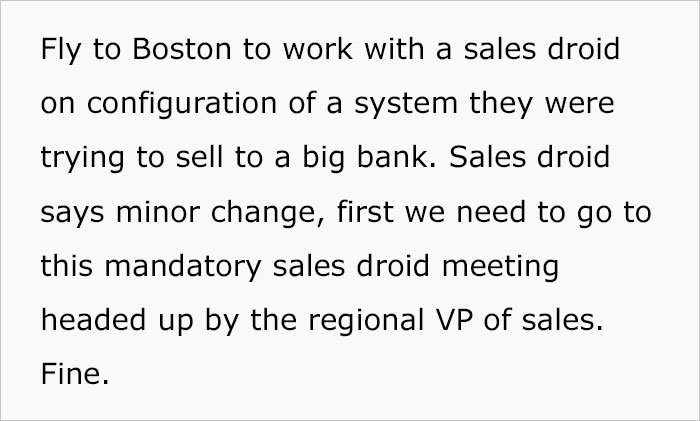 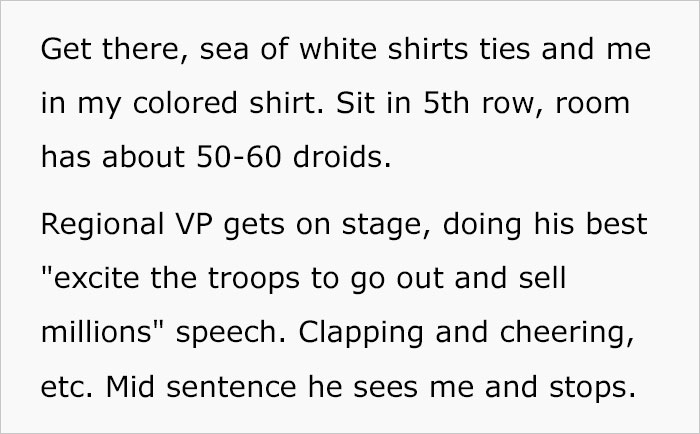 No problem. He gets there and sees a sea of white shirt salespeople, while he was wearing a colored one. Actually, he usually wears striped blue, pale green or similar button-down shirts as white would stain very easily given his usual line of work as a hands-on engineer.

So, he’s there, the only dude out of the ordinary, and mid-meeting, the regional VP, who was the speaker, addresses Kilted and says he’s supposed to wear white because ALL of his staff wears white. 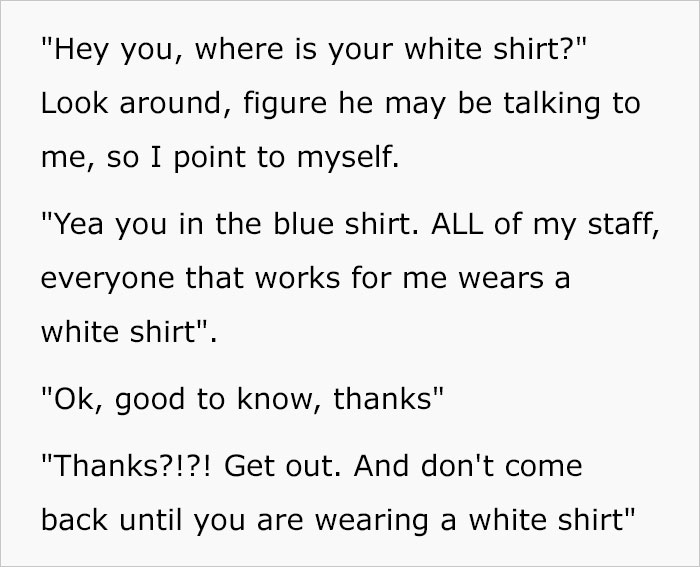 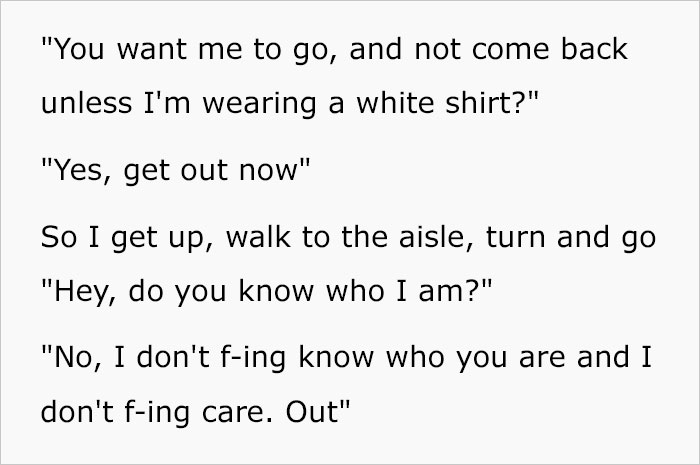 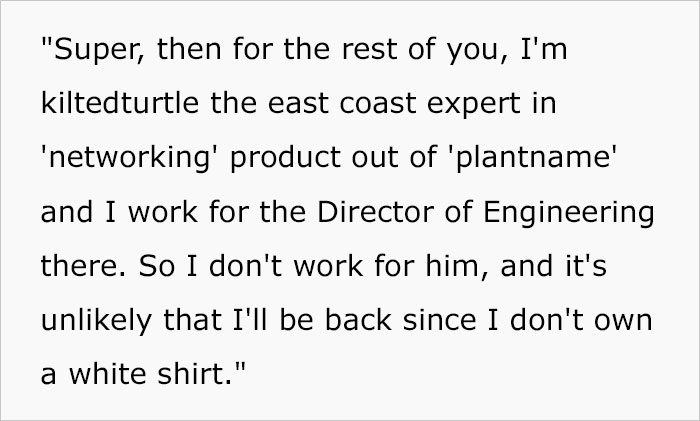 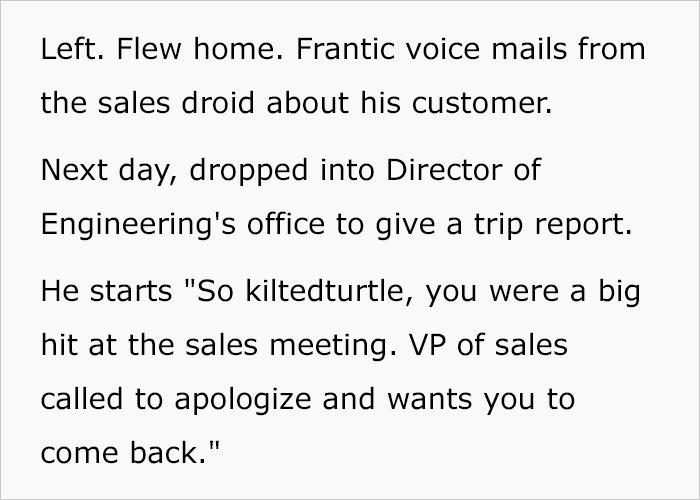 Kilted responded with “good to know, thanks.” Well, the VP wasn’t having any of it and told him to get out. Cue malicious compliance.

“Really? Get out? You know who I am? No? Cool.” As Kilted was standing up and almost leaving the room, he briefly introduced himself and his part in the company, and pointed out that he does not work FOR the VP and it’s highly unlikely he’ll be back as he doesn’t own a white shirt. And he bolted.

Back home, he comes into the office and is told that he was a “big hit” at the sales meeting he bolted from. Apparently, the VP wanted to apologize and to bring Kilted back, but too late, hot plate, he’s not going back. He could solve whatever issues arise over the phone. 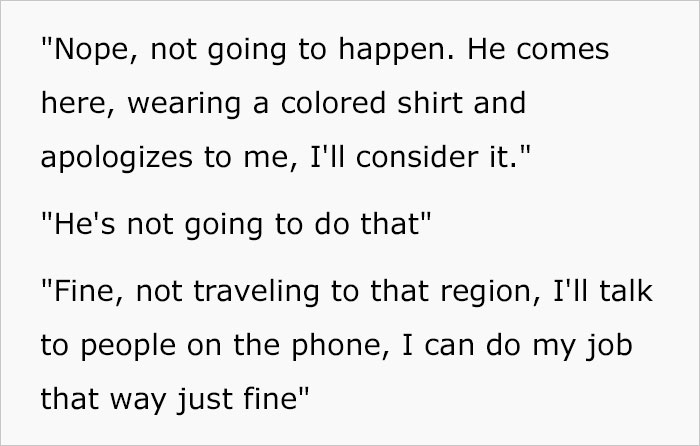 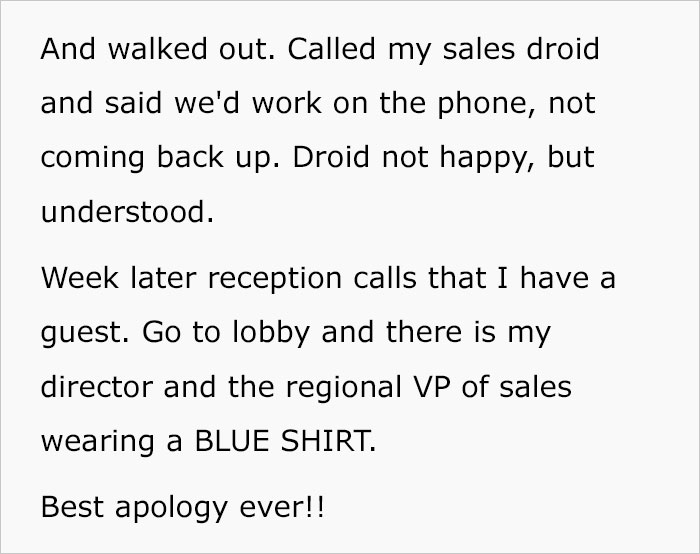 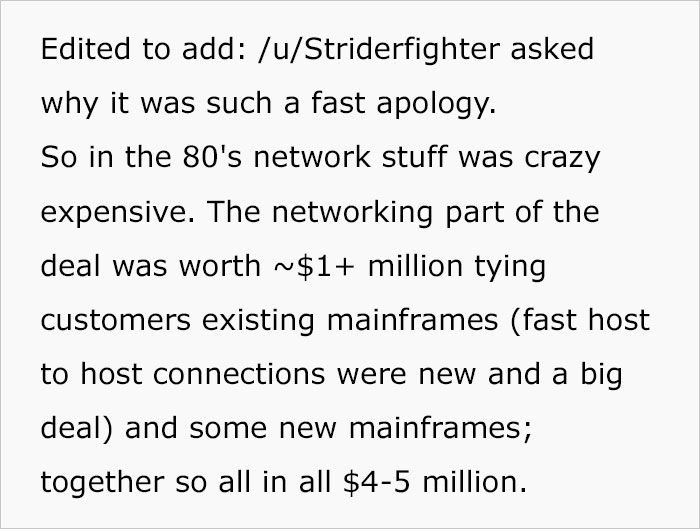 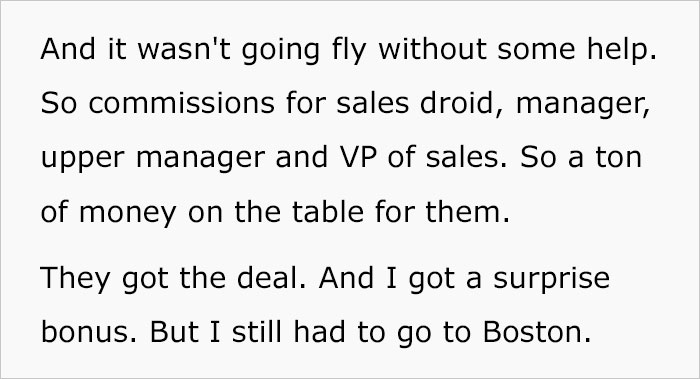 Lo and behold, a week later, Kilted is called to the reception desk and told he has a guest. The guest turned out to be the VP. And what is more, he was wearing a blue shirt. “Best apology ever,” wrote Kilted.

A lot of people were engaged soon after his story was posted on the r/MaliciousCompliance subreddit. While Kilted was busy replying to comments and providing more context to the story, the story acquired over 16,000 upvotes as well as nearly 50 Reddit awards, including gold and silver awards.

Here’s how other redditors reacted to this story 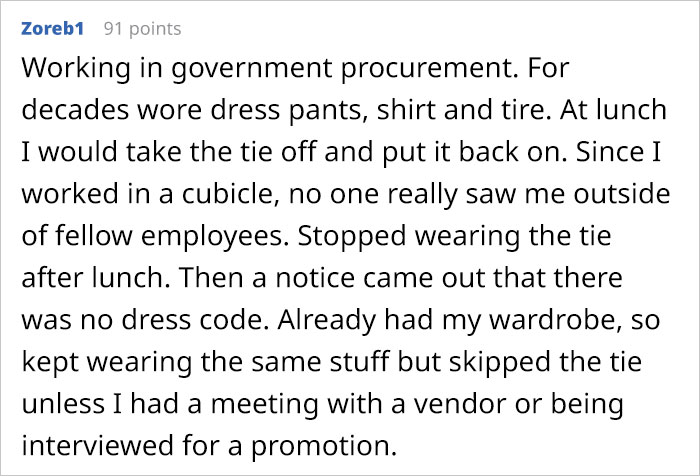 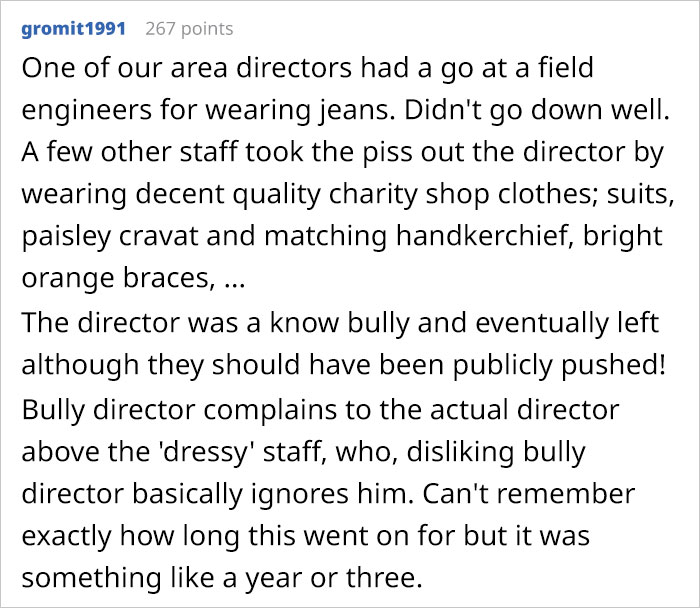 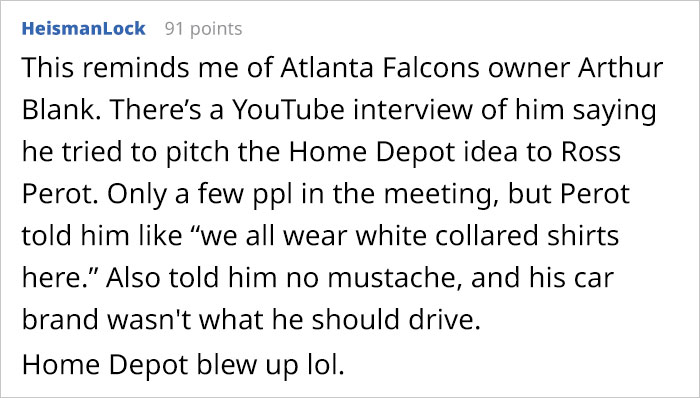 Some commenters called this a power move and said that Kilted did right as the VP deserved it for being a jerk. Others shared similar stories from their line of work, all satisfying, to say the least. Yet others gave the VP some credit for being brave enough to own up to his mistake and apologize. 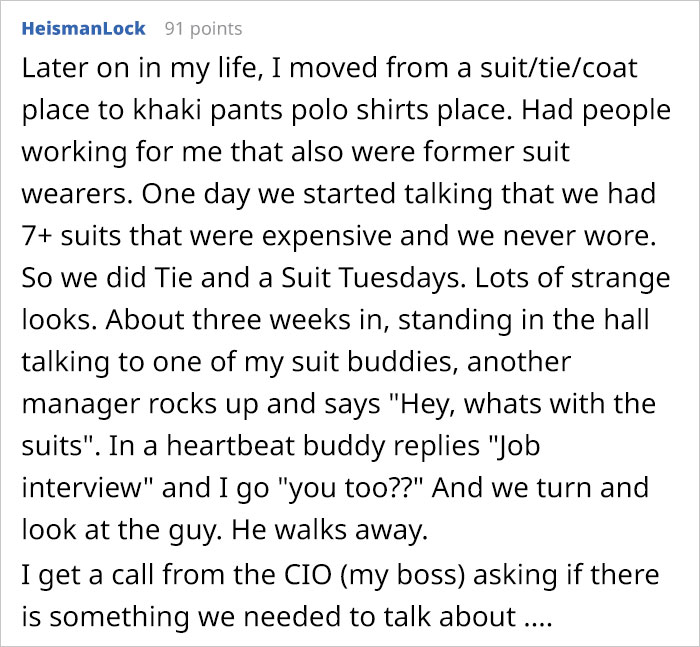 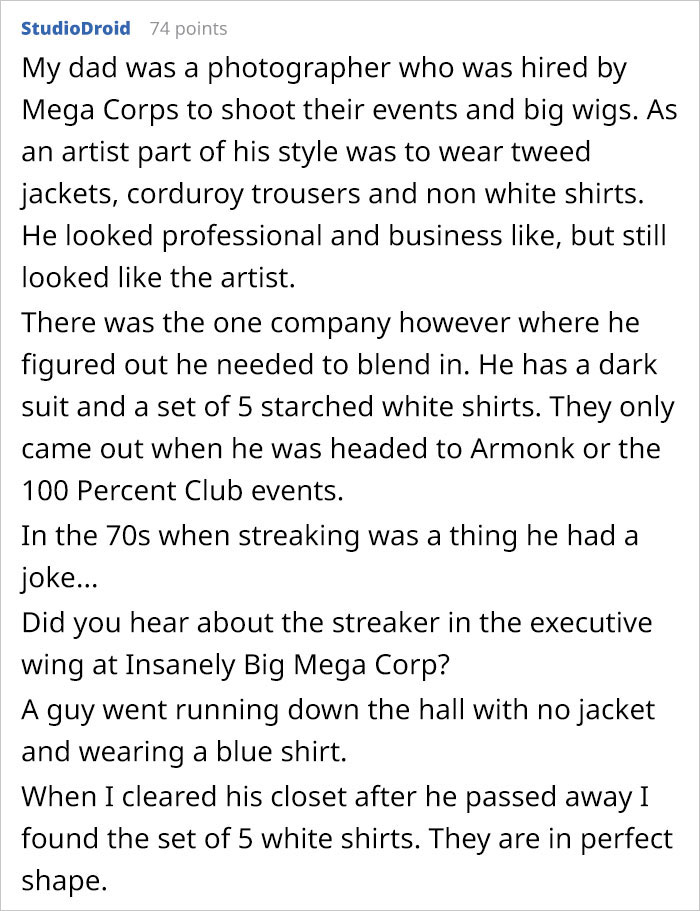 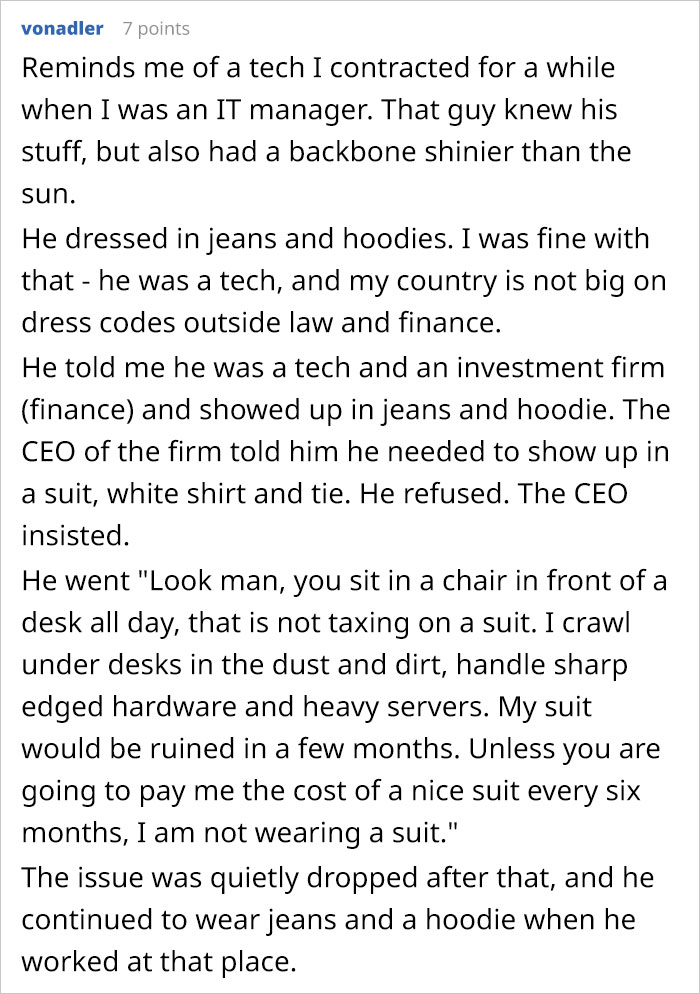 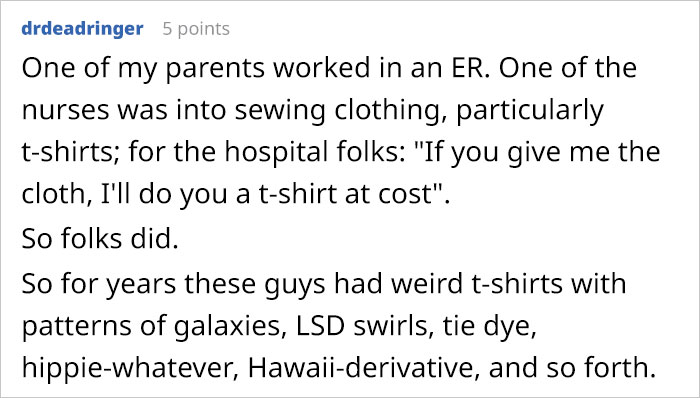 So, what are your thoughts on this? Do you have similar stories to share with us? If so, let us know in the comment section below!


Read original article here
Denial of responsibility! My droll is an automatic aggregator of the all world’s media. In each content, the hyperlink to the primary source is specified. All trademarks belong to their rightful owners, all materials to their authors. If you are the owner of the content and do not want us to publish your materials, please contact us by email – [email protected]. The content will be deleted within 24 hours.

Phillies, Mets face off in weekend ‘what might have been’ series in New York

67 People Who (Almost) Reached Self-Awareness On The Internet, Completely By Accident

103 Parents Having A Worse Day Than You

57 Of The Best British Insults People Shared On Twitter