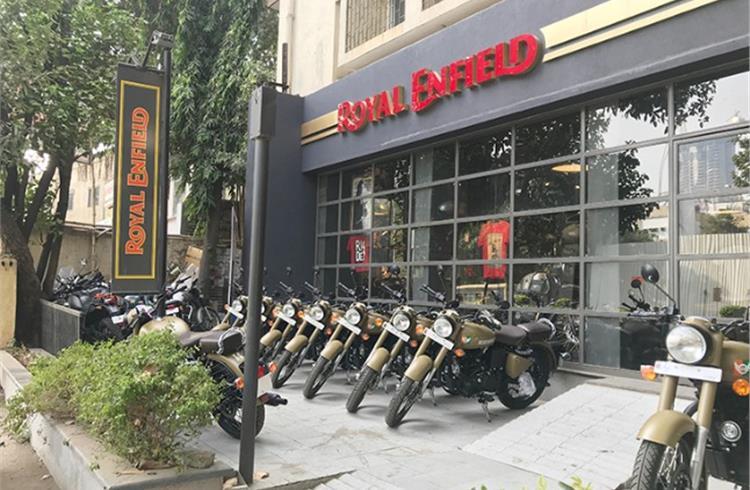 Royal Enfield is also set to cross one lakh exports and is targeting a 1 million output in the next financial year.

Royal Enfield is well on its way to post its highest-ever production output of 8.5 lakh units in financial year 2023 (FY23) on the back of improved supply chain and increased demand for its new models. The exports for the year are also set to breach one lakh units for the first time and account for 12 percent of its total output.

If Royal Enfield achieves its target, it will be the first year of positive growth in the last four years for the maker of the Meteor and Interceptor. Our sister publication Autocar Professional has learnt that the company has set itself a target to breach one million units and if the recovery continues, then it may even look to produce about 1.2 million units as per optimistic estimates in the coming financial year.

Already, in the first half of FY23 (April to September 2022), the output was higher by 86 percent to a little over four lakh units. In the second half, it is likely to produce about 4.5 lakh units, with output nearing one lakh vehicles per month by the end of the fourth quarter of FY23 (January to March 2023).

Royal Enfield’s new entry-level offering, the Hunter 350, has got off to a very good start with about 55,000 units retailed since the launch in August. The company claims the bike has faced very little cannibalisation from its existing portfolio.

The new entry-level bike has resulted in the average selling price falling marginally. However, the upcoming launch of the 650cc Super Meteor will help Royal Enfield recoup its lost margin, believe industry analysts. The softening of commodity prices and improving operating leverage along with price hikes will help Royal Enfield to improve its margins in the following quarters.

Along with a strong traction for premium bikes in the market, RE’s attempt to broad base the supply chain on the semiconductor front appears to be helping. In a recent media call, the management said that the supplies have been better than the previous quarters and it is nearing normalcy.

“We had an issue with availability of semiconductors, steel, etc, which are not in the headwind as of now; it is getting sorted out,” B Govindarajan, CEO, Royal Enfield, said. “We were all assuming the super commodity pressure will continue for a longer period of time, which is now not there. In between, we had our semiconductors and all those things, we were buying it from the resellers as the price was higher and the logistics cost was also higher. All those things are behind us now by and large. Supply chain stability is coming gradually and we are also ramping up.”

On the demand environment, Govindrajan said that during the festive season, RE recorded more than 30 percent marketshare in the more than 125cc segment. It is producing about 3,100 to 3,200 units per day. “Post pandemic, people are going out for weekend rides. There are frequent enquiries on Meteor 650, as to when will the company start the booking for Super Meteor 650, highlighting that demand is picking up,” he said.

However, at the media call, Royal Enfield declined to give any forward-looking guidance on the production and sales plans.

Which current RE models appeals to most to you? Let us know in the comments.

Eureka ran its Chinese residents out. Now the story is finally being told – Chico Enterprise-Record